What we can learn from British Columbia's transportation regulators

John Lorinc: The commerce of ride-hailing, delivered by tech giants Uber and Lyft, exploded in Toronto before we could get a handle on it 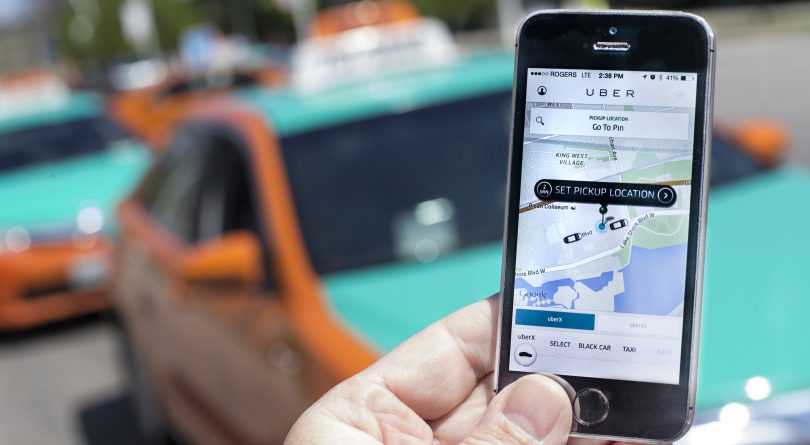 Photographed at The CNE, Toronto, Uber taxi service is a new way to travel around the city. Request and payment are all made using an app. (Bernard Weil/Toronto Star/Getty Images)

In the drawn-out political showdown between the behemoths of the ride-hailing industry and the countless public agencies that seemed unwilling to regulate them, this week, B.C.’s NDP government drew a line on the road, so to speak, and in so doing imposed long-overdue constraints on two of tech sector’s brightest supernovas: Uber and Lyft.

That line has everything to do with rules intended to ensure safe driving, which should, of course, have always been the foremost concern of transportation regulators, but weren’t. In city after city, consumer demand and the tech industry’s jacked up rhetoric of innovation-driven progress relegated safety to the margins—until now.

For Cheryl Hawkes, this development on the left coast marks an important step in a hard-fought, heart-wrenching campaign that led to the desk of a B.C. MLA, who planted herself in the path of Uber and Lyft’s formidable lobbyists. Hawkes, a Toronto writer and editor, lost her 28-year-old son Nicholas in March, 2018, when the driver of the Uber vehicle ferrying him to Toronto’s Pearson International recklessly steered his vehicle into fast-moving traffic.

MORE: How one Ontario town used Uber to solve its public transit crisis

Claire Trevena, B.C.’s transportation and infrastructure minister, introduced tough-minded licensing legislation for ride-hailing companies, compelling Uber and Lyft drivers to have commercial (Class 4) drivers’ licenses rather than the minimal requirements that allowed these tech giants to flood city streets with vehicles. “Our plan has made it possible for ride-hailing companies to apply to enter the market this fall, with vehicles on the road later this year, while ensuring the safety of passengers and promoting accessibility options in the industry,” she said in a statement on Monday.

“[Trevena] was adamant,” says Hawkes, who met with Trevena on her campaign to push governments to get serious about the risk of allowing inexperienced or ill-equipped drivers to deliver an increasingly popular service. “She wasn’t going to budge.”

B.C.’s firm stance is a welcome departure, setting it apart from the long list of jurisdictions that wilted in the face of the ride-sharing sector’s outrageously aggressive expansion tactics. The social cost—from induced congestion to tragic accidents to the financial ruin of independent taxi operators—has gradually come into clearer focus. B.C.’s slow-walk to regulation seems to have produced a saner compromise: a more level playing field, more robust safety regulations and a wake-up call to a sluggish taxi sector.

Those lessons seem to be taking hold elsewhere. As it happens, the B.C. regulations, which have drawn criticism from the ride-hailing industry, as well as Surrey’s chamber of commerce, were released a week before Toronto city council debates an extensive review of its controversial 2016 ride-hailing bylaw. Those regulations, which were the subject of intensive lobbying, allowed ride-hailing companies to operate without driver training requirements, an omission that has since attracted intense public scrutiny due to tragic accidents, as well as other safety concerns, including sexual assaults on passengers.

MORE: Uber says it will stay in Quebec – for now

The two sets of regulations are, in some ways, a study in contrasts.

Besides the commercial licenses, B.C.’s rules include provisions for specialized insurance, a 30-cent per trip fee to support accessibility services, and a limit on the number of driving infractions that generate demerit points and stiff fines—up to $100,000 per day—for illegal operators.

The proposed changes to the City of Toronto bylaw increases the driving history minimum from one to three years, and will also require operators to take training programs from a certified driving program, which currently don’t exist, but are being developed. According to municipal officials, those training rules will bring Toronto in line with places like Chicago and New York. Toronto’s changes also recommend the creation of a fund for accessibility, to be delivered by the city’s cabs and supported by “regulatory charges” on the ride-sharing companies. Unlike B.C., there are no specifics about the size of those fees.

At the abstract level of the laws of supply and demand, the matter of driver training and licensing has always been integral to the economics of the ride-hailing sector. Dan Hara, an Ottawa consulting economist who advised the B.C. government on its regulations, points out that many ride-hailing drivers work part-time and landed in the business because of the low cost of entry. Turnover, he notes, is high.

The requirements of a commercial license are more stringent and time-consuming, and so there are fewer people willing to make the effort, and therefore a smaller pool of potential drivers. “It’s a choice [for regulators],” Hara says. “You get higher safety, but you have supply issues.”

In many cities, including San Francisco, where ride-hailing started, the supply of drivers, and not consumer demand for the service, has been the dominant factor in the evolution of the industry—one that has pitted taxi fleet operators against the likes of Uber and Lyft, Hara notes.

The low regulatory barriers for ride-hailing companies have driven the rapid expansion so apparent in most large urban areas. According to City of Toronto statistics, the volume of ride-hailing trips grew 180 per cent over the past two-and-a-half years, and stood at 176,000 per day as of March. A quarter of the rides are shared vehicles like Uber Pool, but the lion’s share of the business is downtown, where ride-hailing vehicles have increased traffic by five to 11 per cent.

The minimal licensing and training requirements also attracted many younger people, who have been consigned to the so-called gig economy. In Toronto, only 124 cab drivers are under 25, compared to almost 7,600 ride-hailing drivers.

While the B.C. legislation will not impose a cap on ride-hailing vehicles, as some in the taxi industry wanted, the more stringent driver licensing rules will likely serve to limit the take-up in Greater Vancouver, despite pent-up consumer demand for the service. It’s even possible that some of the big players may turn their backs on the Lower Mainland. As Lyft Canada managing director Aaron Zifkin told The Vancouver Sun, the company doesn’t operate in any jurisdiction where drivers are required to have commercial licenses.

“Ninety-one per cent of the drivers on our platform drive less than 20 hours a week,” Zifkin said. “These are people like single moms, students in school and people trying to supplement their incomes. As soon as you introduce that Class 4 commercial license, these people tend not to apply for that type of work.”

Hara, who notes that there’s no guarantee that a commercial license will prevent accidents, predicts that while the ride-hailing giants are glad to see progress in B.C. after years of political gridlock, the licensing restrictions likely mean Uber and Lyft likely won’t operate in smaller B.C. municipalities anytime soon.

But as Hawkes and many others critics have insisted, governments can no longer sideline safety considerations in the name of consumer demand or technological innovation when regulating an industry that stormed into urban areas with scant regard for the rules of the road—rules that, not incidentally, applied to all other companies that were operating vehicles as businesses on municipal thoroughfares.

“It’s time to lead,” Hawkes says of B.C.’s legislation. “These are companies that came into our cities and operated illegally and were defended by their lobbyists. We’re living with that idea. But you can’t play with people’s lives like that.”

One can only hope that decision-makers in other jurisdictions will feel emboldened by B.C.’s defiance.