Why Saskatchewan is still holding out on the feds' climate plan

Opinion: Industry leaders and the rest of Canada have agreed to the Pan-Canadian climate framework. But Scott Moe—like Brad Wall—isn't budging 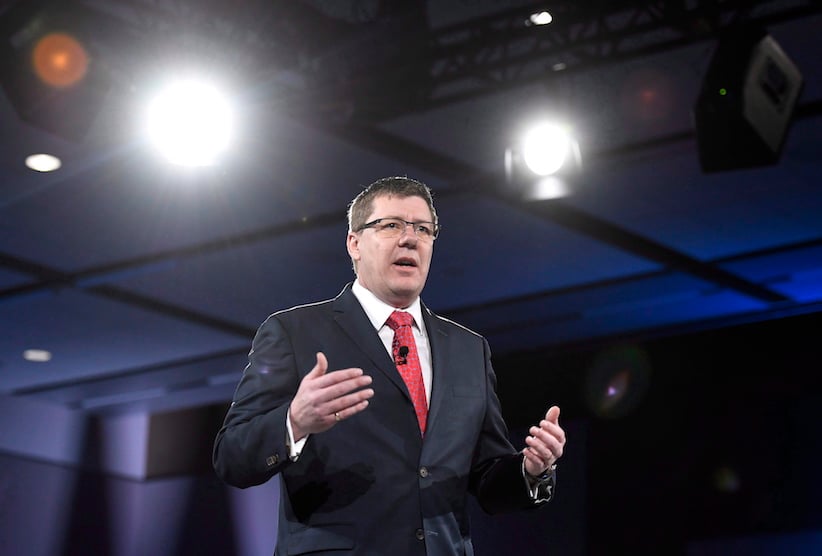 “The way (the previous Saskatchewan NDP government) treated the federal government was one of hostility, and one that they wanted to approach everything with the idea that they would litigate their way out of problems rather than sit down and attempt to negotiate a deal.”

That was then-justice minister Don Morgan in 2008, after announcing that his newly elected Saskatchewan Party was killing the the idea of taking Stephen Harper’s Conservative federal government to court over equalization transfers.

My, how times—and, of course, political alliances—have changed.

By not signing on to the federal Liberal government’s Pan-Canadian Framework on Clean Growth and Climate Change, the province of Saskatchewan has lost a guaranteed $62 million in funding for emission-reduction programs. Opposition to a carbon pricing system—one of the main pillars of the feds’ plan—is Premier Scott Moe’s stated reason for being the only province or territory in Canada to refuse to sign the document. Since minutes after he was elected to replace former Saskatchewan premier Brad Wall, he has been echoing his predecessor’s defiant stance on the same: that carbon pricing will never be implemented by the government of Saskatchewan, and if it is forced upon Saskatchewan by the feds, it will equal doomsday for the provincial economy.

But Moe’s unstated but entirely obvious reason for not signing the pact is political: voters in Saskatchewan, who will never, ever put the environment before the economy, are overwhelmingly opposed to a carbon price, thanks largely to a sweeping and highly effective campaign of fear spearheaded by Wall over the last couple of years.

Now, with federal environment Minister Catherine McKenna refusing to back down—she has made it clear that whether Saskatchewan signs or not, a carbon price will be imposed upon it—a legal battle, funded by Saskatchewan taxpayers, appears to be a given. “If this does end up in court, so be it,” was Moe’s response to McKenna’s ultimatum in a recent interview with Global News.

READ MORE: The conservative case for a carbon tax in Canada

Never mind that other provinces have already determined a legal fight is futile. Manitoba, the only other province to hold out until they signed the deal in late February, had spent $40,000 on an extensive legal analysis on a challenge to the imposed carbon price in October 2017; it found that if the province took the feds to court, “we lose,” said Manitoba Premier Brian Pallister. Moe has said he’ll go ahead regardless, and that lawyers within his government’s justice and constitutional branch are already “developing a case,” with Moe arguing that the main industries in Saskatchewan—mining, forestry, agriculture and energy—are already undertaking their own sustainability measures, without the need for a carbon price.

“It is a policy that doesn’t work. It doesn’t work for our province, it doesn’t work for our industry,” Moe said in the same Global News interview where he vowed he would take the federal government to court. This argument dovetails nicely with that of Wall’s, though Moe’s is not nearly as torqued; Wall, after all, described the federal government’s carbon pricing plan as a “ransom note” and a sort of “environmental guilt payment” which will “kneecap” the provincial economy by “siphon(ing) over $2.5 billion” from it and making it “a less competitive place to do business.”

While their hyperbole game is certainly strong, the Saskatchewan government has yet to reconcile their position on industry crisis with the fact that thousands of corporations worldwide, including major players in Saskatchewan like Shell, Suncor, TransCanada and Enbridge, have all either imposed a carbon price internally of their own, or shown support for one, citing predictability, reduced regulations and market reliability.

The claim that Saskatchewan stands to lose $2.5 billion upon implementation of a carbon price—though the new number is $4 billion, according to Saskatchewan Environment Minister Dustin Duncan—is simply false. Yes, a carbon price for an industry-based economy like Saskatchewan’s would amount to billions of outgoing dollars per year, but every penny would go directly back to the Saskatchewan government as revenue to spend as it chooses (though McKenna’s office has said that only provincial governments that voluntarily use the federal carbon price system will be guaranteed to be able to use the funds as they see fit, while the holdouts, ie. just Saskatchewan, may have it delivered directly to recipients as decided by the federal government).

So: what’s really going on here?

READ MORE: The tall tasks ahead for Scott Moe

Well, as tough as it may be to swallow—or for the Sask Party government to ever actually admit out loud—the reality is that Saskatchewan residents are already paying a kind of carbon tax. In fact, every man, woman and child in the province has so far paid more than $1,400 each on carbon capture and sequestration (CCS), or the $1.5-billion (and climbing) retrofit of SaskPower’s Boundary Dam 3 (BD3), technology which hasn’t even remotely been proven as efficient, never mind environmentally helpful.

Still, the Saskatchewan government needs the federal government to recognize the billion-dollar BD3 as a valid effort to battle carbon emissions; if it doesn’t, and it is forced to implement a carbon price anyway, it’s going to become increasingly difficult to justify to voters the point of spending more than a billion dollars of Saskatchewan taxpayers’ money on carbon capture.

And that expenditure has absolutely impacted the province’s economy. One need look no further than the province’s attempts to make painful cuts to healthcare, education and social services in its 2017-18 provincial budget to determine where that billion-plus dollars could have come in rather handy.

One wonders how much longer Moe expects people to believe that when it comes to carbon pricing measures, he knows better than the titans of industries he claims to be protecting, or that he knows better than every other province in Canada, where carbon pricing may not be the perfect solution, but certainly hasn’t produced the dramatic, negative results Moe is predicting for Saskatchewan.

It would be refreshing if the Saskatchewan government decided to open up honest dialogue about what’s best for its people—their land, their air, and their future—including what, for better or worse, it has already done on regulating carbon emissions in an effort to battle climate change. Instead, it seems Moe is content to carry Wall’s torch by treating the federal government with hostility, and committing to the notion that he and his cabinet and caucus colleagues will, as they criticized the NDP in 2007, “litigate their way out of problems rather than sit down and attempt to negotiate a deal.”

Times change, but some things don’t.