Opinion: Despite assumptions that rebates would effectively buy Canadians' support for a carbon tax, there's no clear evidence that happened in B.C. 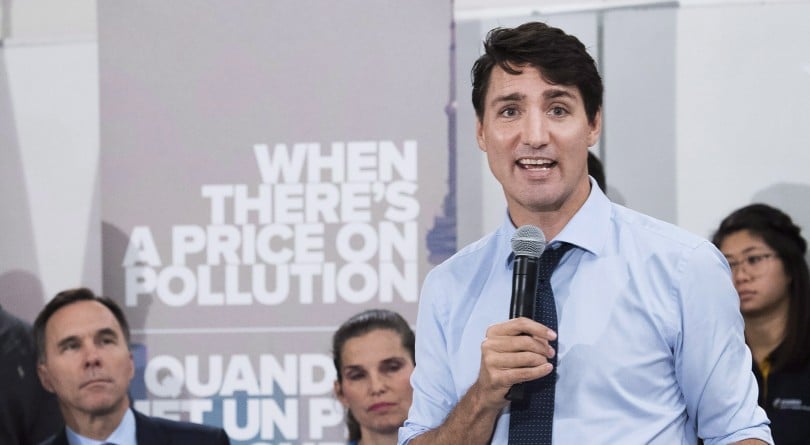 On Oct. 23, the federal government announced its carbon pricing backstop, which will be imposed on provincial governments who fail to act on the climate crisis on their own. In those provinces—Saskatchewan, Manitoba, Ontario, and New Brunswick—the federal carbon price will be applied starting at the beginning of 2019. The government also explained it will return most of the revenue that it raises from imposing the carbon price back to households in the provinces from which it originated, an approach to revenue recycling sometimes referred to as “fee and dividend” that has long been discussed as a potentially progressive way to spend carbon-tax revenue.

It also ensures that Canadians receive compensation to cover the increases in gasoline, natural gas, and other energy costs that result from the carbon price. The federal government’s analysis shows that for most households, the carbon-price rebates will be larger than the increased costs from the carbon price. For low-income households, this revenue can be particularly important. The lowest-income households, who spend relatively less on gasoline, natural gas, and other carbon-containing goods than households of higher income, will benefit the most.

But perhaps most importantly, returning the revenues may also lead to higher support for the climate policy—an important factor to ensuring its long-term durability. Raising energy prices can be a difficult political sell, after all, and many commentators think that a carbon price with household rebates is more likely to succeed politically. Even critics realize this policy design might increase political support; Saskatchewan Premier Scott Moe called the carbon-tax rebates a vote-buying scheme.

However, there is not much proof to date on whether carbon price rebates actually increase public support for climate policy.

One place we can look for evidence of this is British Columbia, which implemented a carbon tax in 2008. Revenues from B.C.’s new carbon tax were used to offset a number of other taxes, and to provide credits to both households and businesses. In 2009, in the face of opposition from northern and rural households, the B.C. government brought in a new rebate program linked to the carbon tax. Under the new program, homeowners in northern and rural B.C. would receive an additional $200 per year in rebates, designed to offset these households’ additional energy costs. This Northern and Rural Homeowner Benefit Program (NRHBP), which started in 2011, offers an interesting case study on whether households that receive a carbon tax rebate increase their support for the tax.

We used polling data, provided by Environics, to understand how support for the carbon tax in British Columbia was affected by receiving the carbon-tax rebate. Specifically, we compared opposition to the carbon tax over time in B.C. cities larger than 100,000 people, to those in smaller communities, where many household began to receive this new carbon tax rebate starting in 2011.

If receiving the carbon-tax rebate increased support for the tax, we should be able to see this in the polling data. But instead, we find the opposite pattern, as shown in the figure below. Before this new rebate was implemented, opposition to the carbon tax was similar in B.C’s small and large communities. However, following the rebate, households in small communities actually became more opposed to the carbon tax relative to their big-city counterparts, despite receiving the new carbon tax rebate. 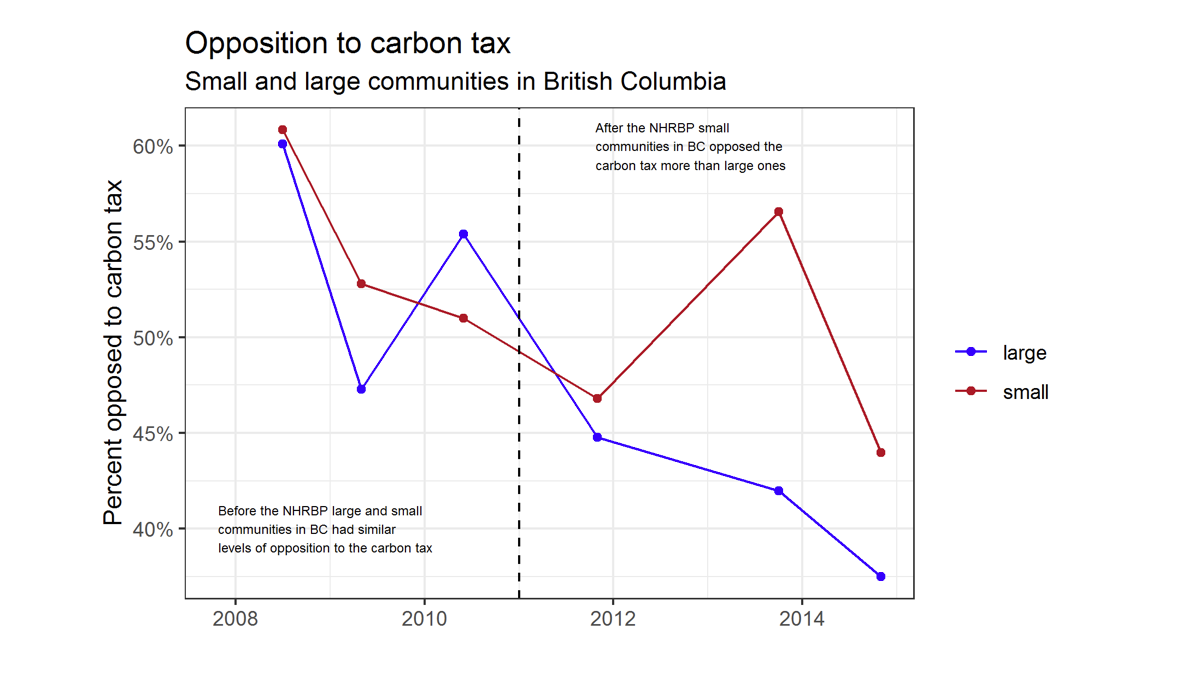 Polling data from Environics, data analysis by the author. Data restricted to households in British Columbia. Small communities are defined as having less than 100,000 residents; large communities have more than 100,000 residents. The Northern and Rural Homeowner Benefit Program (NRHBP) was implemented in 2011, as indicated by the dashed line. Based on survey data from 1,626 British Columbians from 2008-2014.

That said, there are likely problems with comparing big and small cities in B.C. over time. Perhaps other things are changing in these different kinds of cities simultaneously, and those factors are driving the results; there may be, for example, more conservative people living in rural areas, and as they hear more critical voices from their co-partisans on climate policy, they may begin to reject the carbon tax, a pattern seen in the United States. As Matto Mildenberger and Anthony Leiserowitz show in their 2017 study in Environmental Politics, the public may follow politicians’ leads in disputing the importance of acting on the climate crisis.

Another way to look at the data is to compare households in small communities in British Columbia with households in more similar small communities in other provinces. We can do this using the same public opinion polls that Environics has run; in fact, they have been asking Canadians in other provinces every year if they support a “B.C.-style carbon tax.” 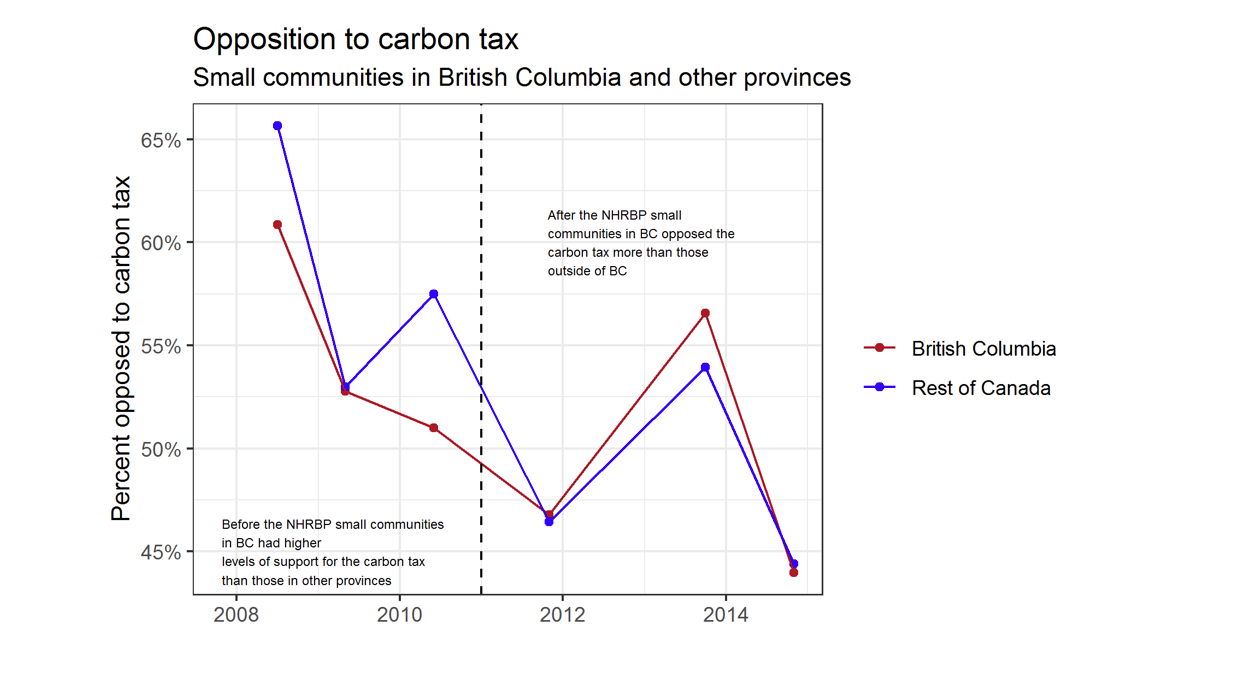 Polling data from Environics, data analysis by the author. Data restricted to households in small communities of less than 100,000 residents. The Northern and Rural Homeowner Benefit Program (NRHBP) was implemented in 2011, as indicated by the dashed line. Based on survey data from 5,426 residents of small communities from across Canada from 2008-2014.

These results might be explained by how the program is implemented. B.C.’s carbon tax rebate was implemented as a property tax reduction, likely making the benefits and relationship to the carbon tax less clear for citizens. If rural residents do not understand that the revenues they are receiving are tied to the carbon tax, it is hard to imagine that the tax credits will cause support the policy to increase.

By contrast, Alaska’s tax on fossil-fuel production is rebated through dividends checks in the mail. The amounts citizens will receive is announced at a widely publicized annual event. Similarly, in California, revenues from a cap-and-trade program are rebated through electricity bills, with the California government sending an email twice yearly to alert citizens to the benefit. While we don’t have evidence on whether these approaches increase public support for the policies, it is likely that the high-profile approaches were designed to increase visibility to constituents and increase overall support for the policy. While it may be cheaper to do the rebates through the tax code, it may end up reducing its salience with the public substantially.

These results, broadly speaking, complicate simple assumptions that carbon tax rebates will easily build constituencies of support. And if the federal government aims to leverage the carbon-tax rebates to generate support for the program—a desirable side effect, if it works—it needs to think carefully about how to implement the policy in a way that will actually make Canadians like the policy. Without obvious links between the financial benefits and the carbon price, opponents could easily attack the policy and undermine its support, as has occurred in Australia. Effectively communicating the national carbon pricing policy—more than the simple act of doling out a chunk of change—will be critical to its success.