Martin Patriquin on the latest turn in the Quebec election campaign 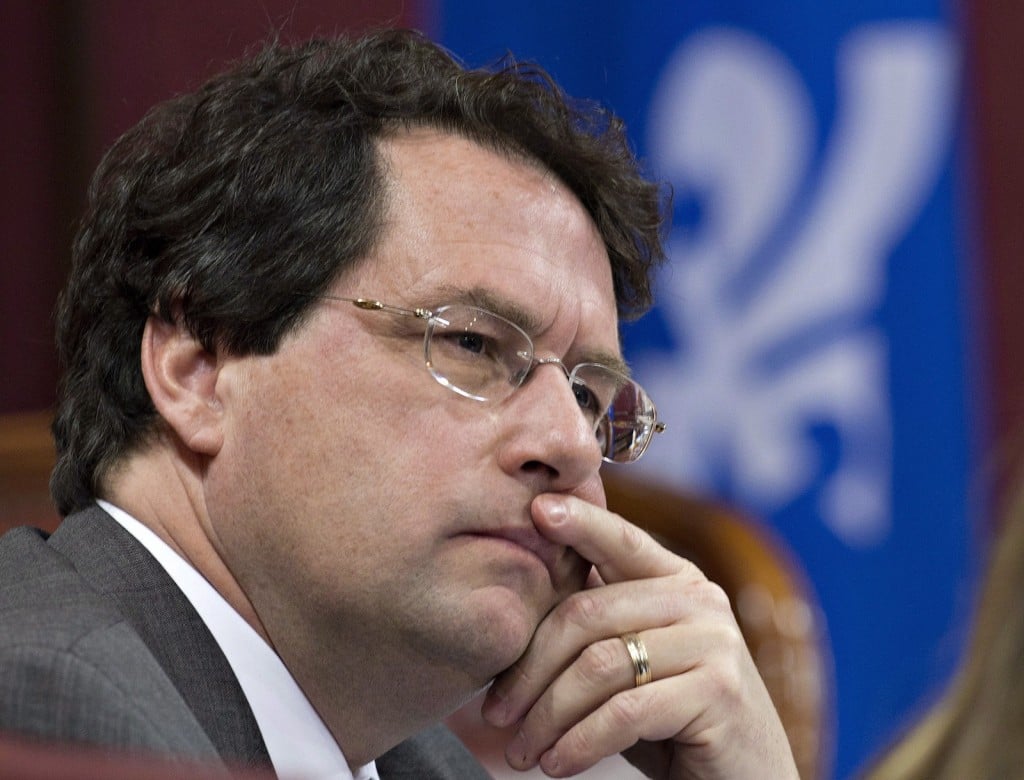 Bernard Drainville has once again gone on the offensive about the so-called “Quebec values charter.” The Parti Québécois minister, architect of the proposed charter banning religious garb from the bodies of anyone drawing a government paycheque, is now saying any student wearing a religious face covering can’t… well, be a student in Quebec.

It has been an extremely divisive debate, and Drainville’s timing is interesting. Quebec is 15 days into an election campaign, and recent polls have suggested the PQ is losing ground to the opposition Liberals. The charter is one of the “identity issues” on which the PQ believes it has a monopoly, and it has benefitted the party since its introduction in last fall.

A cynic might be led to believe that Drainville’s return to the fore is a way to reclaim a bit of that magic. In a radio interview today, Drainville went even further than he has before, saying a majority Parti Québécois government would compel observant Muslim students to doff their religious face coverings while at school. Should they not, they would be prevented from attending class.

It’s the first time I can remember where Drainville specifically mentioned prohibiting the wearing of niquabs or burkas by students of publicly funded institutions—though banning face coverings in general is alluded to in the proposed law:

Persons must ordinarily have their face uncovered when receiving services from personnel members of public bodies. How this obligation applies must be specified by the public body in its implementation policy, in accordance with the second paragraph of section 22.

A public body’s implementation policy must state and define the rules for handling the accommodation requests on religious grounds that are submitted to it. The policy must specify, for persons requiring the services dispensed by the public body, how the obligation to have one’s face uncovered applies during the delivery of services.

The policy must also set out what steps the personnel members of the public body are expected to take when an accommodation request is submitted to them.

For the record, here is the most interesting bit of his chilly exchange with an incredulous Stéphane Gasse and co-host Vincent Cauchon of Quebec’s Radio X, translated for your convenience:

Gasse: We have to believe you, Mr. Drainville, that everyone talked about [the charter] everywhere you went [on the campaign trail]?

Drainville: No, not everyone, but a lot of people. And you know, we can take care of health care issues, of the economy and our values at the same time. I know a lot of people who say we have to take care of our health care system, that there’s a lot of work to be done. I agree. I agree as well that we have to create jobs. But the only party that proposes clear rules to reasonable accommodations, who says that the equality between women and men isn’t negotiable, who says that chez nous the state isn’t religious, that we have to respect everyone equally, it’s the Parti Québécois. I’ll tell you something: there are many Quebecers who believe there have been unreasonable accommodations, and that we have to have clear rules so that we can continue to have social peace in Quebec, and I think social peace is pretty important. A society that is at peace with itself can have all the debates, it can take all the decisions, but to find ourselves in a situation where we have to re-live reasonable accommodations, all the fights and the…

Gasse: There weren’t any. We haven’t had any in the last few years. Yes, have they happened? Yes. But recently? The answer is no. I think people figured out that the rights of women were already protected.

Drainville: Mr. Gasse, the nurses, teachers, school directors are reporting cases to us all the time. Male patients in hospitals who refuse to be treated by a female nurse or doctor, or shaking hands with a female teacher. These cases happen in our schools and our public institutions. It’s not acceptable.

Gasse: It’s not acceptable, it’s true. But we hear constantly about people who have these accommodations refused, and that’s probably a much better way to deal with it than to vote for some sort of charter that basically puts fire to gunpowder. You are totally aware of this, Mr. Drainville. Come on. Be honest.

Drainville: Do you agree with me….

Drainville: …that at the very least is to at least prohibit the niquab and the burka, that is to say the covered face…

Drainville: There are some at Concordia. At Concordia University [In Montreal] they accept that students can show up in a niquab for classes or exams. They accept the wearing of niquabs at Concordia. And when the question was put to [Liberal leader] Philippe Couillard he said, “We’ll discuss it,” instead of banning it with a law. He’s not even able to ban the niquab or the burka with a law. How can we have confidence in a man like that? He should put on his underwear [ed’s note: French expression saying to take one’s responsibilities] on an essential and elemental issue like this.

Gasse: Excuse me Mr. Drainville. There are people who teach at Concordia while wearing the burka?

Drainville: There are students who wear the niquab, and [Concordia’s administration] said in parliamentary commission that they would accept a teacher wearing the niquab. And when the question was put to Philippe Couillard, he said that he was going to have discussions with Concordia. He refuses to ban it with a law. How can we trust a man like that who at the bare minimum couldn’t have a law…

Gasse: Okay, but the charter isn’t supposed to prohibit students from wearing the niquab. It’s the teachers, because you said…

Drainville: Mr. Gasse, I’ll answer your question. The charter obliges an uncovered face for people giving or receiving a governmental service. Listen to me: a citizen giving or receiving a governmental service must do so with an uncovered face. For all the rest, the prohibition of religious signs applies to agents of the state. You’re right, the employees, the nurses, police officers, judges, everyone paid with public funds. But for people who are requesting a service, like students, must do so with their faces uncovered. The Liberals were once in favour of this, and now they can’t even agree with that. They aren’t even able to ban the niquab or the burka.

The election campaign, I think it’s safe to say, just got noticeably uglier.