Politics Insider for Jan. 7: Canada is in for a COVID slog; Erin O'Toole speaks up for the unvaccinated; and Jagmeet Singh's new baby 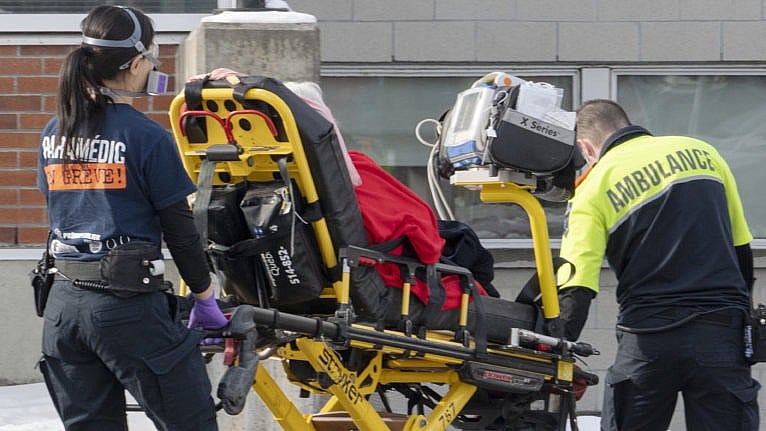 Ambulance workers in Montreal transport a patient to the emergency room as hospitalizations continue to rise due to the COVID-19 pandemic. Jan. 5, 2022 in Montreal. (Ryan Remiorz/The Canadian Press)

We can’t know yet if Omicron will hit Canada like it hit South Africa, with a wave that falls as quickly as it rose, so Canadian health officials are bracing for a tough slog, writes Patricia Treble in Maclean’s.

The big concern is our health care system. Though 82 per cent of Canadians have at least one dose of vaccine, that leaves nearly one-fifth of the population unvaccinated. And with unprecedented numbers of COVID-19 infections—including a big spike in cases among seniors—that means the number of people eventually needing hospitalization could overwhelm the system.

Treble also lists the things you can do to reduce the risk, to yourself and the system. At the top of the list: get a respirator and avoid indoor crowds.

Under pressure: Omicron is wreaking havoc in Canadian hospitals, the Post reports, but they were already struggling with staffing problems.

Even large, urban hospitals and medical systems have been strained by lack of staff. While news about staffing shortages due to COVID-19 infections among health-care workers and burnout have become commonplace during the pandemic, officials are raising the alarm again amid record numbers of cases due to the highly transmissible Omicron variant.

Not working: In the Globe, Robyn Urback writes that Canadians need to recognize that our health care system is not up to the job and make changes.

This pandemic should prompt Canadians to reckon with the reality that our health care system isn’t working. Indeed, when a province of millions is brought to a virtual standstill by the prospect of a few hundred additional people in acute care beds, that fact is undeniable.

Open the system: In the Vancouver Sun, Daphne Bramham points out that an “estimated 5,000 internationally educated doctors are here and eager to work, but are unable to leap the licensing barriers,” which seems absurd when the system is breaking down. But, Bramham writes, the system allows “Canada’s medical profession to operate like a closed-shop union.”

Backing the unvaxxed: Erin O’toole spoke up for the unvaccinated on Thursday, CP reports: “There is going to be as much as 15 per cent of the population that is not vaccinated. In some cases, you will have to try and find reasonable accommodations between keeping people safe and people not losing their job, losing their home, not being able to provide for their kids. I don’t think that position is irrational when people’s lives are on the line.”

Meeting urged: O’Toole called for an emergency meeting of the House of Commons Health Committee to examine the federal response to the pandemic, CTV reports. O’Toole blames Justin Trudeau for lockdowns: “In a population that is now largely fully vaccinated, in fact the action and inaction by the Trudeau government is normalizing lockdowns and restrictions as the primary tool to fight the latest COVID-19 variant.”

Opener borders sought: The travel industry wants Ottawa to ease travel restrictions, as other countries are doing, the Globe reports.

Hawkish adviser: The Globe has a story about Trudeau’s new national security adviser, Jody Thomas, who is seen as a China hawk, having spoken frankly about the threat posed by that country at a security conference last year.

Fêtards in trouble: The Quebec influencers who set off a media circus when they shared videos of their crazy flight to Cancun are in trouble. Some of them have lost their jobs, Le Journal de Montréal reports (translation).  The organizer of the flying circus has attacked the airlines, Global reports. The sorry saga continues to make headlines around the world.

Singh a dad: Jagmeet Singh announced Thursday that he and his wife, Gurkiran Kaur, welcomed a baby girl into the world on Monday, CP reports: “Our powerful little baby girl is basically my birthday present for life.”