More respondents were disappointed with the deal than pleased with it, meaning a presumptive plus for the Liberals could be a liability 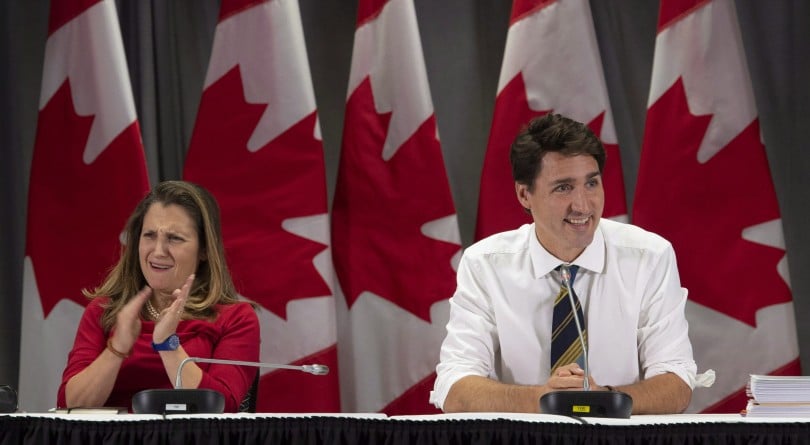 A few weeks after the Trudeau Liberals’ victory lap on North American trade, cheers from the audience seem to have evolved into boos and groans, a new poll suggests. As a result, securing a new NAFTA may not be the clear winning issue the governing party hopes—but rather a source of fresh political ammo for the Conservatives.

More Canadians are disappointed than pleased with the U.S.-Mexico-Canada Agreement, according to a survey released Tuesday by the Angus Reid Institute. While it seemed like a late-September push from Foreign Minister Chrystia Freeland and her negotiators saved Canada from finding itself out of a two-way trade pact between Mexico and the United States, poll respondents aren’t so sure the deal was better than no deal at all: the country appears evenly split three ways as to whether it was better, the same or worse for Canada than not being part of the new deal.

Freeland and Prime Minister Justin Trudeau have celebrated the deal, alongside most business and labour groups, because it headed off Donald Trump’s threats of massive auto tariffs or widespread disruption to Canada’s industrial supply chains. “Every Canadian whose livelihood relies on trade—which is most of us—benefits from the renewed certainty,” Freeland wrote in an op-ed last week.

The Liberals have been gambling that Canadians understand the deal as an unusual one, in which a series of concessions on dairy and pharmaceuticals were necessary prices in the face of Trump’s bids to scrap the dispute resolution tool, impose a sunset clause or skew auto production south of the border. The Conservatives prefer to compare it to the status quo, rather than to the Trumpiest-case scenario.

“Justin Trudeau and the Liberals are measuring their success by what they managed to keep and hold on to, while the Americans are measuring their success in their victories and what they got from us,” Conservative Leader Andrew Scheer told a party rally in Ottawa on Sunday, to mark the one-year countdown to the 2019 election. “There is no way nobody in Canada can believe we got more out of this NAFTA deal than we had before.”

“Nobody” isn’t quite accurate, but it’s not far off the mark. Only 18 per cent of Canadians think the country is better off with the USMCA than it was under NAFTA, the Angus Reid survey suggests; 47 per cent say the country fares worse, while 35 per cent feel things stay the same. Even among Liberal supporters, only 20 per cent feel the new deal is an improvement for Canada over NAFTA.

Liberal voters were largely more content than disgruntled about the new deal, 51 per cent to 33 per cent. But the concessions seem to have soured both the left and right on the deal—NDP and Conservative voters were both twice as likely to be disappointed than pleased with the USMCA.

Angus Reid’s online survey of 1,500 Canadians was conducted from October 11 to 17. A sample of this size normally has a margin of error of plus or minus 2.5 percentage points, 19 times out of 20.

While 45 per cent of respondents nation-wide said they’re disappointed with the deal compared to 34 per cent who are pleased, it’s a 58-27 split in Quebec, which is both where erosions of dairy supply management are most controversial and where the Liberals’ poll showing has been far stronger than the Conservatives’. In electorally crucial Ontario, where auto manufacturing reigns, public opinion is evenly split between those who like or are let down by the new accord.

The political winning and losing on USMCA may come down to who gets to frame the questions. Last week, an Abacus Data survey showed much more positive public sentiment. There, nearly three-fifths of respondents believed that the Trudeau government negotiated as best as it could for Canada, and two-fifths believed a Scheer-led Conservative government could have achieved more. Abacus found the same supportive result when it asked  whether Canadians would vote for or against the deal if they were MPs.

Four decades ago, Pierre Trudeau’s cabinet ministers asked voters to compare the Prime Minister not to the almighty, but to the alternative. Justin Trudeau’s team wants Canadians to think the same way on trade. These new poll numbers indicate that the Conservatives will fare best if they make Canadians hold up the trade deal the Liberals have produced against the one that existed prior to Trump and the younger Trudeau.