Paul Wells: Hassle and woe are the hallmarks of the opposition leader role. And the Tory leader seems to be finding that out the hard way. 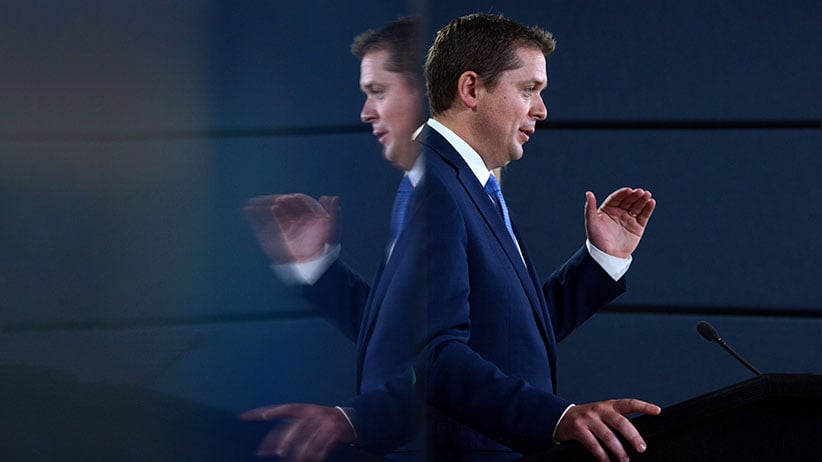 Leader of the Official Opposition Andrew Scheer makes an announcement and holds a media availability at the National Press Theatre in Ottawa on Thursday, July 20, 2017. (Sean Kilpatrick/CP)

There comes a time in every new opposition leader’s career when he discovers it’s a horrible job. This usually happens early.

The reasons why it seems like it shouldn’t be a horrible job are: (a) all you have to do is make fun of the government; (b) being an opposition leader, and therefore hating the government to your bones already, for reasons of ideology or team allegiance or both, it seems to you that everyone in the country will want to join you in making fun of the government; (c) it’s a nice job in general, with a suite of offices and an excellent seat in the House of Commons.

The reasons why it turns out to be a bad job anyway are: (a) you’re probably in opposition because your party has lost an election, and many Canadians haven’t yet forgotten why they wanted that to happen; (b) the rotten press corps will insist on poking and prodding the opposition’s behaviour, rather than focussing its wrath entirely on the government; (c) the job carries all of the perils of government—gaffes, caucus management, infighting—with none of the institutional clout.

And so hello to Andrew Scheer, who’s having a bit of a week.

His headaches include Sen. Lynn Beyak, who wishes we would tell more good stories about residential schools, and whom Scheer stripped of her caucus responsibilities and committee appointments while keeping her in his caucus. The stance manages to fall halfway between defending Beyak and exercising effective damage control. Then there’s Gerry Ritz, who used his last days as an MP to call Environment Minister Catherine McKenna a “climate Barbie,” an outburst that earned him a conspicuously time-delayed rebuke from Scheer.

This comes after Scheer said nothing about the Rebel Media meltdown until he announced a position that will upset the Rebel’s many admirers in the Conservative activist base. And after he had difficulty explaining how the central plank of his Conservative leadership campaign, linking free speech on university campuses to federal research funding, would work in practice.

A few things about all that. First, it must be maddening to Scheer that he even has to talk about any of this, given that Justin Trudeau has launched a war on the middle class from within the tax-sheltered Trudeau-Morneau family timeshare, and Omar Khadr has been extravagantly compensated on the public dime, and there’s a deficit and all the rest.

Second, even on the specifics of the cases that are tormenting Scheer this week, there’s room to wonder whether some of the outrage on the evening political chat shows is a bit selective. True, Gerry Ritz called Catherine McKenna a Barbie. And she’s really not a Barbie. She’s a formidable lawyer whose entry into politics at the highest level has gone well. But meanwhile, four Liberal MPs have been ejected from the Liberal caucus over two years amid allegations of serious mistreatment of female colleagues or staffers. It takes chutzpah to suggest only Scheer has a problem with caucus knuckle-draggers.

But if Scheer has anyone he trusts in his inner circle, they need to take him aside right about now and say, “Suck it up. Nobody said opposition was fair. Nobody even said it was pleasant. It is what it is. Learn how to work a job.”

Scheer might want to ask Tom Mulcair how rewarding the job of opposition leader can be. Mulcair was, by popular consent, the best at the job in many years. His party fired him for his troubles. Before Mulcair there were a couple of Liberal stumblebums, Michael Ignatieff and Stéphane Dion. Before them was Stephen Harper, who had no stomach for Question Period and was second-guessed constantly as either too conservative or not enough. Before Harper were all the opposition leaders Jean Chrétien cheerfully dispatched: Stockwell Day, Preston Manning, Lucien Bouchard blowing out of Ottawa because Chrétien turned out to be harder to fight than he looked. And before them all, there was Chrétien himself, a notoriously lousy opposition leader, forever quelling open revolt from Liberal caucus naysayers by threatening or mocking them.

It was before my time, but it seems to me the last opposition leader to enjoy the job as a romp straight to office was Brian Mulroney in 1984. That’s a long time ago. Hassle and woe are the more common hallmarks of the job.

But Scheer’s difficulties are more than just everyday job stress. The Ritz-Beyak-Rebel troubles are not merely evidence of a vindictive Liberal press corps. They suggest emerging flaws in Scheer’s own leadership style that he’ll need to address.

In all three cases, his first instinct was to hope the storm blew over. I don’t think it’s because Scheer underestimated the coming storm; it’s because at first he thought he could wear the storm as a badge of honour. Scheer fancies himself a happy warrior for free speech. He pitches his campus free speech policy as a defence of people’s right to say even upsetting things. The impression he gives is of a guy whose first instinct, when Ezra Levant or Lynn Beyak or Gerry Ritz gets into trouble, is to say, “Oh, come on; this isn’t that big a deal.” Then when it becomes a bigger deal he backtracks. This shows both a glass jaw and a limited ability to estimate the size of a deal.

I don’t think Scheer’s performance on these files is determined solely by his temperament, either. It’s also structural. He sold himself to his party as a specific kind of cure to Harperism. It’s not clear he has the luxury to be that kind of cure.

By the time Scheer became Conservative leader, many Conservatives, probably most, were heartily sick of the Harper party’s oppressive message-control mechanisms. The forms you had to fill out, the layers of approval. Opinions diverged on whether the party needed to change its policy direction, but in its day-to-day communications and caucus management, the overwhelming consensus was that it needed a lighter touch.

Scheer’s selling proposition to Conservatives was that he could appeal to moderates by being a nicer guy than Harper, but that he could mollify the activist base by letting it act up a bit, without fear of reprisal. Blow off some steam. Have a few debates. The driving assumption seems to be that Harper brought the hammer down on his own people because Harper is the kind of guy who enjoys bringing the hammer down. And there’s some truth to that!

But there’s also the absolutely brutal purgatory the Canadian Alliance went through for two years before Harper became that party’s leader. Plummeting in the polls. Constant MP defections from caucus. Mockery in the news coverage. To some extent, this continued through the 2004 election, which Harper believed he lost because he could not trust his own candidates not to sound crazy. That’s why he clamped down.

Scheer will soon have to decide whether he can afford to let his caucus members say what they want. Until he does, the emerging pattern of his management style—laissez faire, followed by hasty backtracking—will come to define him.

The backdrop for all of this, it’s worth remembering, is the formidable task the fates have assigned Scheer. He’s trying to defeat a new majority government after a single term. How easy is that?

The historical record suggests it… may be impossible. Since Confederation there have only been two governments that were swept into power with a majority of seats in the Commons, only to be swept right out of power at the next election. Those were the governments of Alexander Mackenzie in 1878 and R.B. Bennett in 1930. Realizing the peril they faced, each dragged out his time in office to the full five years. Each lost the next time—to the man he had beaten in the previous election. Mackenzie ran Sir John A. Macdonald out of office, only to be run out by Sir John five years later. Bennett beat Mackenzie King, only to lose to King at their next confrontation. It’s a bit like Joe Clark defeating Pierre Trudeau, only to lose to Trudeau, though Clark never had a majority. (This is why one of Harper’s worst fears during his first precarious year in power, 2006, was that Paul Martin would cancel his retirement to lead the Liberals at the next election. Or that Jean Chrétien would.)

What’s never happened is that a government elected with a majority loses power to a rookie leader at the very next election. There’s too much momentum in power, too much willingness among voters to stick with a new-ish government and give it time. That’s the trend Andrew Scheer is trying to buck. It can be done—precedent in politics isn’t the same as laws of physics—but it will be hard enough even if he does a flawless job.