Canada's Brexit talks with the U.K.: There are none 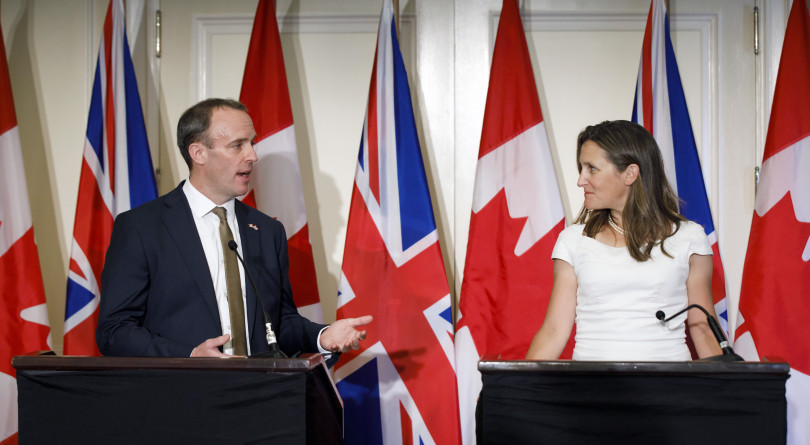 Freeland glances at Raab as he speaks during a press conference following a bilateral meeting in Toronto on Aug. 6, 2019 (THE CANADIAN PRESS/Cole Burston)

Sometimes it’s harder to spot what doesn’t happen than what does. It was a few hours after Chrystia Freeland’s news conference with Dominic Raab before I realized what she hadn’t said.

Freeland is Canada’s minister of global affairs. Raab is Britain’s foreign secretary. They’re roughly the same job. Raab is on what The Guardian calls “a symbolically important trip to North America,” which peaks with important Washington meetings Wednesday. Mexico after that. Of course it’s symbolically important because Raab is the foreign secretary in a government that is determined to exit the European Union in 85 days.

Raab stood shoulder to shoulder with Freeland for a brief media availability on the 19th floor of the Royal York hotel, during which his forehead was conspicuously shiny with flop sweat. Honestly, on the scale of calamities he has endured lately, he needn’t have worried. He was the Minister for Exiting the European Union for three months in 2018, during which, if you’ll recall, Britain didn’t exit the European Union. That term ended with his resignation over the “withdrawal agreement” Theresa May had negotiated with the EU. Raab didn’t like much about the deal, including some important elements of substance but also the obvious fact that the PM had taken pains not to consult her Brexit minister, who was he.

Yet his mix of philosophic disagreement and professional humiliation didn’t stop him from voting for the withdrawal agreement soon afterward—which in turn wasn’t enough for it to pass. If the U.K. undergoes a no-deal Brexit on Oct. 31, it’ll be because this was the deal Parliament didn’t pass, and there is no time to agree on any other. Honestly a news conference with Chrystia Freeland is a breeze by comparison with all that.

She is ever a congenial host. There was so much to talk about, she said. “We discussed our shared concern over the situation in Hong Kong, the crisis in Venezuela, the genocide of the Rohingya and Russia’s illegal invasion and annexation of Crimea,” she said. “I also thanked Dominic for the U.K.’s strong support of the two Canadian citizens arbitrarily detained in China.”

She thanked Raab because his predecessor had played host to a media freedom conference in London in June. The next one will be in Canada next year. And she said nice things about Canada-U.K. relations. “We are cousins, we’re family. I think that connection is based of course on our strong economic ties, on our military alliance, but above all on our shared values. Today was a great opportunity to discuss those.”

READ MORE: Dazed and confused, it’s Britain in the age of Brexit

Over to Raab. The newly re-minted minister endorsed Freeland’s remarks and threw in kind words about Canada-U.K. cooperation on D-Day. Because otherwise we might forget about that. Finally he was clear to talk about Brexit.

“The U.K. is at an important historic crossroads and the government is very clear that we will be taking the U.K. out of the EU on October 31st,” he said. “There is a democratic verdict from the 2016 referendum that must be respected whether or not we conclude a deal with the EU.”

Boris Johnson’s new U.K. government would “like, and we hope, to reach an agreement with our EU partners—but we will leave the EU in any event at the end of October.” This was the Johnson government’s relatively clear commitment to a “no deal” Brexit, if a new withdrawal agreement can’t be negotiated, ratified by Parliament, and accepted unanimously by the other 27 EU member states before Halloween. (Spoiler: It can’t.)

At this point Raab started… spewing words… in an apparent attempt to sound encouraging about Canada-U.K. relations after Brexit. “Seamless transition,” he said, and “not just about risk management,” and “grasping the enormous opportunities of our new found freedom.” He reiterated a desire to  “grasp those global opportunities” as well as to “expand our horizons” and “raise our level of ambitions in the world.”

Concretely, what might that mean? “As part of that, we want to take our friendship with Canada and the Canadian people to the next level”—ooh—”on trade, on security cooperation, on human rights and on those global challenges that are beyond any particular region like tackling climate change.”

With that, the foreign secretary and the global minister stood while reporters asked their questions. There were four. By a curious convention that long predates the Trudeau government, the more dignitaries at a news conference, from the more countries, the fewer the questions organizers permit. The reporters, all based in Canada, asked the ministers about China (Any news? No), Venezuela (Any news? No), China again (How about now? No), and—in a question that was put only to Raab—about Canada-U.K. relations after Brexit.

Raab was asked to compare the Canada-EU trade deal, CETA, with a hypothetical post-Brexit Canada-U.K. trade deal. “There are all sorts of opportunities for the future,” he said. “We’re talking about some of those issues right now.” Could he produce a third consecutive sentence with as little information as the first two? You bet he could. “I think the number one priority for the U.K. is just to have as seamless a transition as possible and we’re going to be working closely together to try and achieve that.”

What struck me later was that Freeland had not said a word about Canada-U.K. relations after Brexit, as such. Nothing. I checked this hunch with her office, and they were quick to confirm and to send the transcript from which I’ve been quoting.

Her silence, abetted by Canadian reporters who needed fresh clips on top-line stories so they had no time to ask about Freeland’s guest, permitted her to decorously avoid saying out loud what Raab knows well: That formal talks between Canadian and British officials over a post-Brexit trading arrangement ground to a halt weeks ago. In the event of a no-deal Brexit, Britain will offer radically reduced tariffs to all comers. Canadian officials, reasonably, decided there’s no need to offer concessions in return for what would be essentially automatic access to the U.K. market.

Nor did she have to add that last year, Canada was the 17th global destination for U.K. exports; that four of the top five destinations, and seven of the top 10, are EU member states; that exports to those EU destinations total nearly $180 billion, while exports to Canada stand at $7.3 billion; and that increased market access for Canada would hardly compensate for chaotic reductions in access to the far vaster, nearer European market.

It has been fascinating to watch Freeland in recent months, as she becomes ever fonder of picking her silences and keeps finding new silences worth picking. If discretion is the better part of valour, the minister has become steadily more valorous. In any event, a good host does not embarrass her guest, and Raab was free to escape Canadian airspace un-contradicted. Halloween crept another day closer.