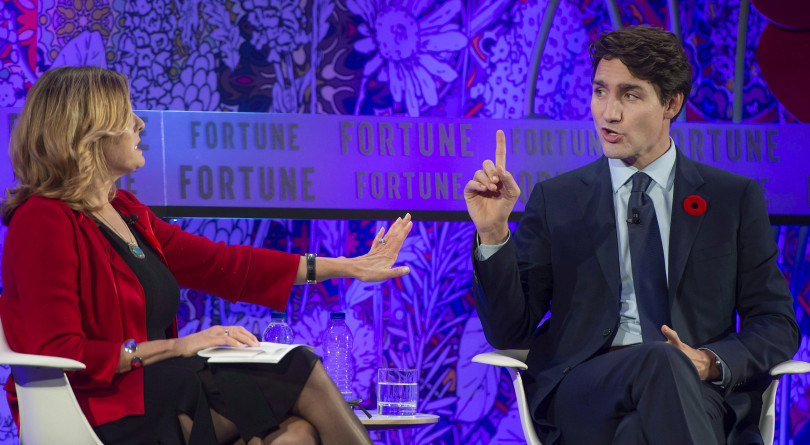 Trudeau speaks with Nina Easton, an American author, during the Fortune Most Powerful Women International Summit in Montreal on Monday, Nov. 5, 2018. (THE CANADIAN PRESS/Peter McCabe)

Among the various ways Justin Trudeau is being slammed for his handling of the SNC-Lavalin affair, the charge that the Prime Minister has revealed himself during this controversy to be no real feminist is the hardest to pin down.

Did he fail to properly respect the independence of the attorney general, back last fall when Jody Wilson-Raybould had the job? On this core question, there are meetings and phone calls and text messages to argue about, rules and codes to interpret, in trying to arrive at an answer.

Did he botch efforts to contain the controversy after it exploded, and ultimately go too far in kicking Wilson-Raybould and her chief ally, Jane Philpott, out of the Liberal caucus? On these issues, political strategists, Parliament Hill veterans, and even pundits, have thoughts about crisis management to kick around.

Did he somehow let down the feminist side, though? This question naturally arises because the two former cabinet ministers testing Trudeau’s mettle both happen to be women. And, to quite a few commentators, that fact alone is telling enough. But it is hardly sufficient.

There’s no solid reason I’ve heard to presume that two male cabinet ministers would have fared differently had they dissented from Trudeau’s handling of a file that brings into play hard questions about the administration of justice, worrying possible economic outcomes, and, yes, potential ramifications in the coming fall election.

What’s needed to give the critiques of Trudeau’s feminist credentials heft are facts that don’t require guesses about the dynamics between men and women in Trudeau’s famously gender-balanced cabinet, or speculations about the PM’s own putative biases.

In other words, does any data show that he’s running the government in a way that’s better or worse for women than what came before him? In fact, there are at least some numbers, and they tend to bolster his feminist credentials.

Maclean’s asked the Privy Council Office (PCO), the branch of the bureaucracy that supports the Prime Minister’s Office, for recent figures on what are called Governor in Council appointees. These are the fortunate individuals who get paid to work on federal commissions, boards, Crown corporations, agencies and tribunals.

As of the end of 2018, 49 per cent of these appointments had gone to women, according to the PCO data, up markedly from 35 per cent in 2015, the year the Trudeau Liberals beat Stephen Harper’s Conservatives in an election. That 14-point rise in the share of these plum federal jobs going to women compares to just a four-point increase, from 31 per cent to 35 per cent, in the previous three-year period.

Those numbers represent—to home in on just one significant segment of them—a shift from women filing only about a third of the seats on Crown corporation boards when the Liberals took power to very nearly half now—up from 34 per cent at the end of 2015 to 48 per cent at the close of 2018. That’s up 14 points in three years of Trudeau rule, compared to six points over the previous three-year span.

Looking more broadly at women in the executive ranks of the federal public service—known to bureaucrats by their “EX 01” through “EX 05” designations—there’s been less dramatic change, but still an uptick. The number of women at that level stood at 2,567 last spring, up from 2,264 in the spring of 2015. That meant women accounted for 49 per cent of the government’s executive ranks, up from 46 per cent over that three-year period.

Arguably even more important, or at least more prestigious inside the government, is the cadre of deputy ministers—the top mandarins in federal departments. Overall the number of women filling these powerful posts climbed to 39 last year from 30 three years earlier. That translates into 46 per cent women at the deputy minister level last spring, compared to 41 per cent three years earlier.

Even taken together, of course, these numbers don’t mean Trudeau’s Liberals have excised sexism from the federal government. Still, weighed against mere impressions of what the SNC-Lavalin affair might signify about his feminist bona fides, knowing how many more women are working in key federal jobs these days has to count for something.