Various shots from the first official day on the campaign trail, starting with the ceremonial dropping of the writ (not pictured) at Rideau Hall, liveblogged earlier here: 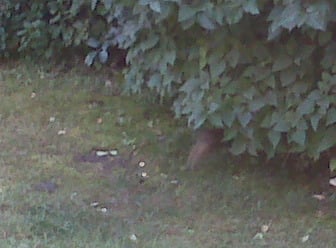 On the way to Rideau Hall, I spotted this adorable little Lapin-Canadian, but wasn't able to whip out my berry in time to get a decent shot, so you'll have to trust me that the brown blur is actually a bunny rabbit. 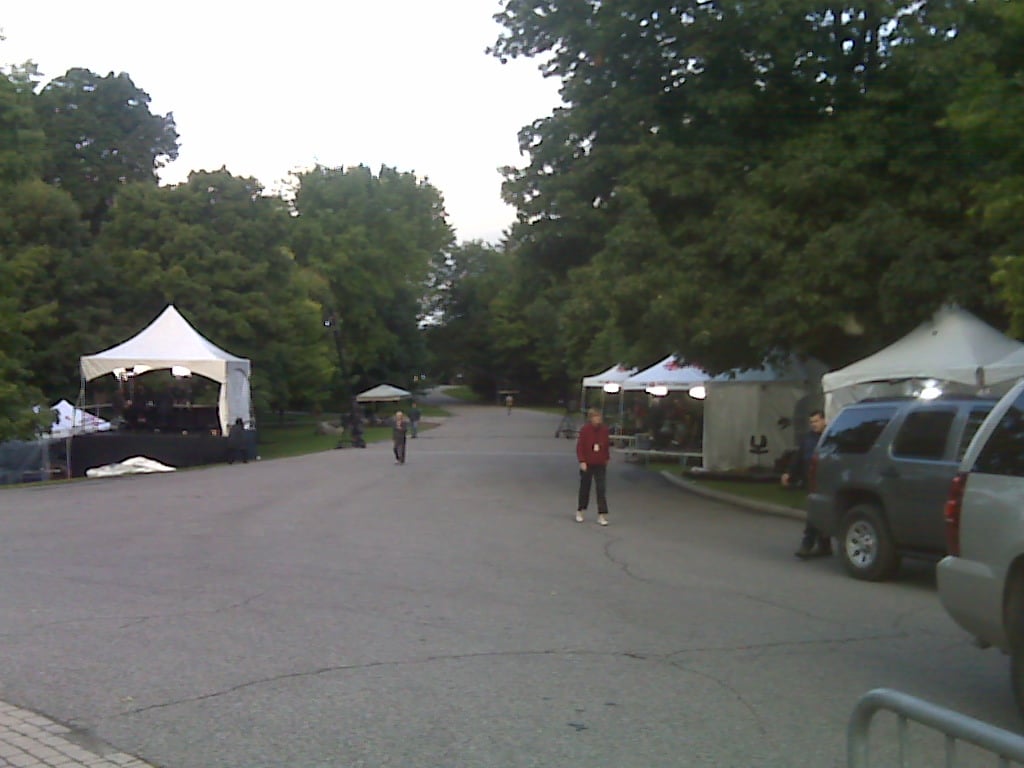 This was the scene outside Rideau Hall when I showed up just after 7am - more than an hour before the PM was scheduled to arrive, at which point I wisely decided against moaning over my 5am wakeup call to any of the bleary-eyed pundits wandering the grounds in search of some sort of caffeinated beverage. 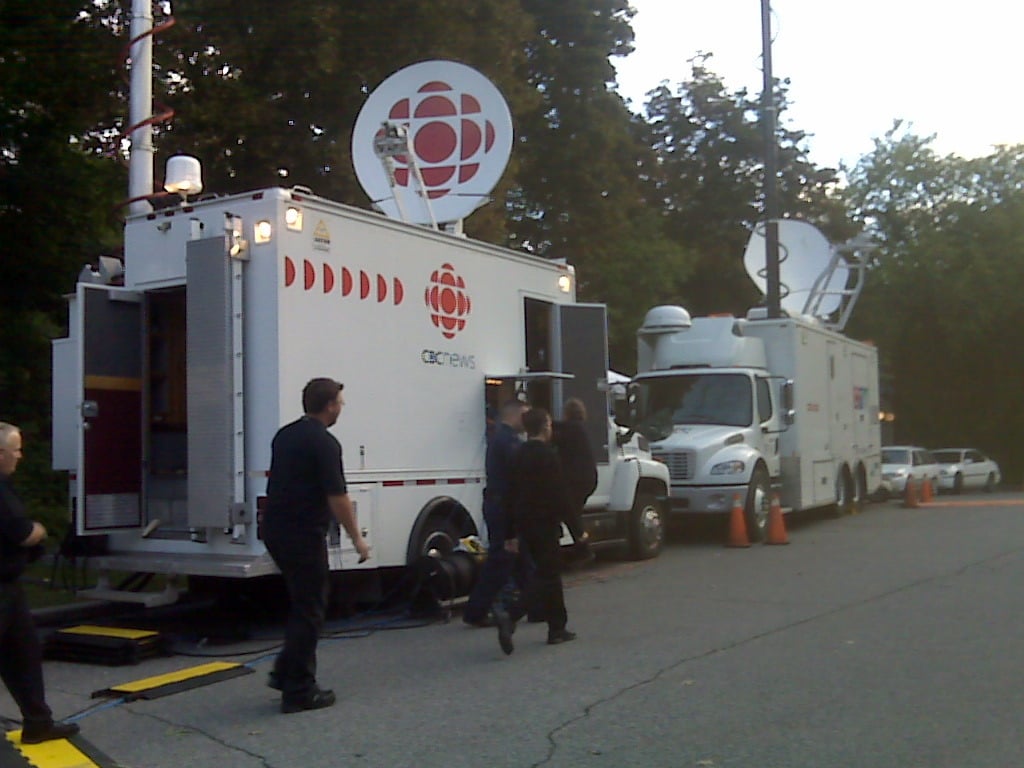 At least the CBC satellite truck got a change of scenery after spending most of last weekend parked outside 24 Sussex Drive. (Which was pretty much abandoned when I walked by, incidentally - only two camera crews waiting to capture the departure; the real show was at the other end of the journey, less than two blocks away.) 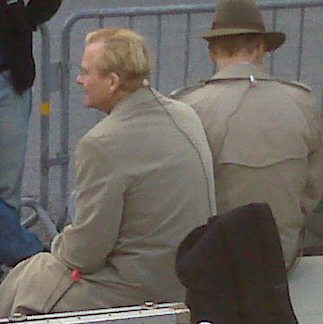 A contemplative moment for the matching tan-suited sages of CTV News, Bob Fife and Craig Oliver.

Perhaps as a gesture of strategic good faith, reporters were actually allowed to mingle with PMO and party staffers on the other side of the barricades, in sharp contrast to the last few times we've assembled outside Rideau Hall. 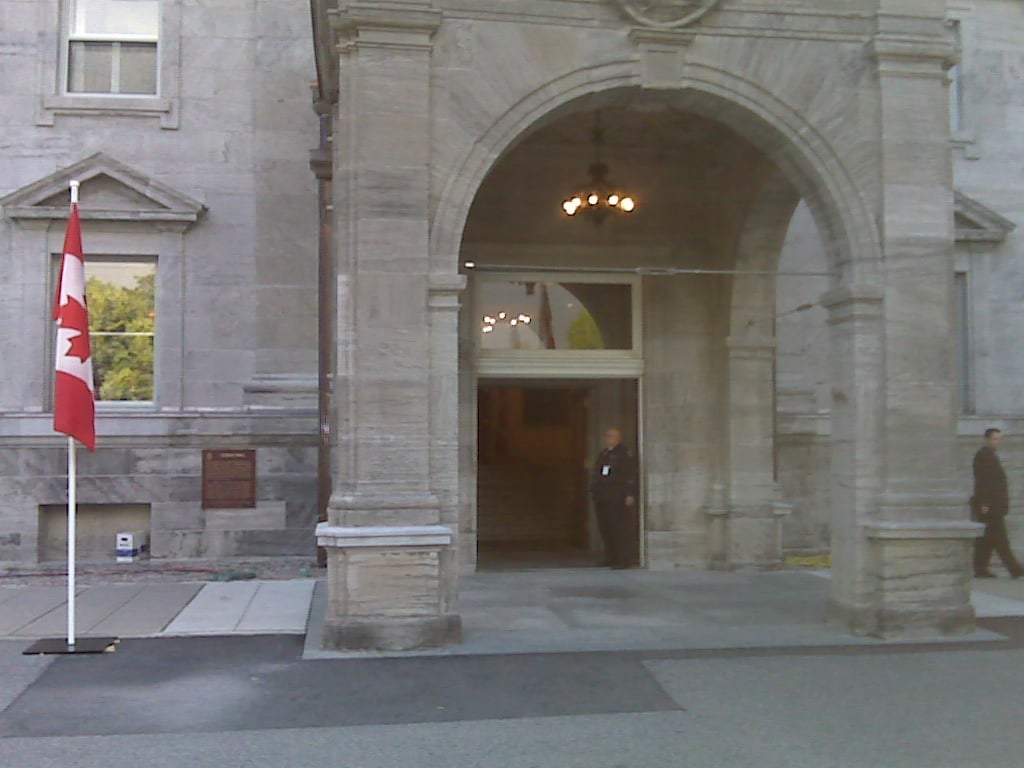 If I had moved, like, a foot to the right, this would have been a perfectly acceptable shot of the front door, but instead, I managed to go all asymmetrical. Oh, and there was actually a row of like, nine other flag poles lined up beside the one pictured, but I didn't think to include those in the shot either. 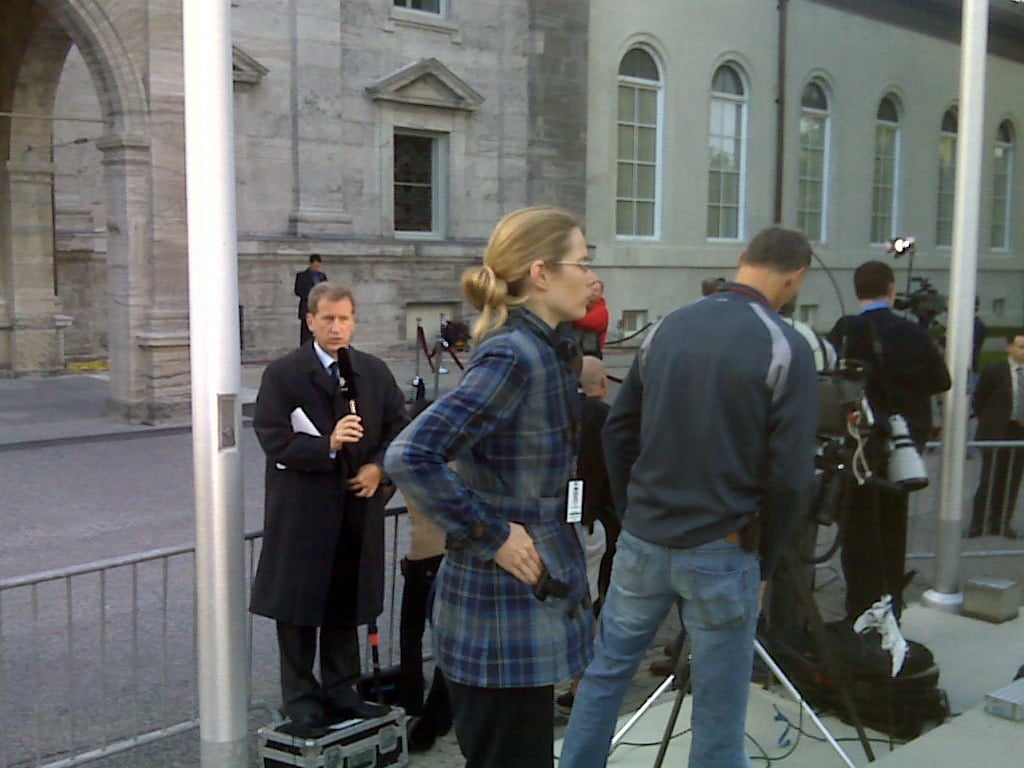 The CBC's Paul Hunter gets his serious face on just before going live with the PM's arrival. Wells was shooting this at the same time as I was, but moved out of frame just before I took this picture, thus saving this from being the meta-est media moment ever. 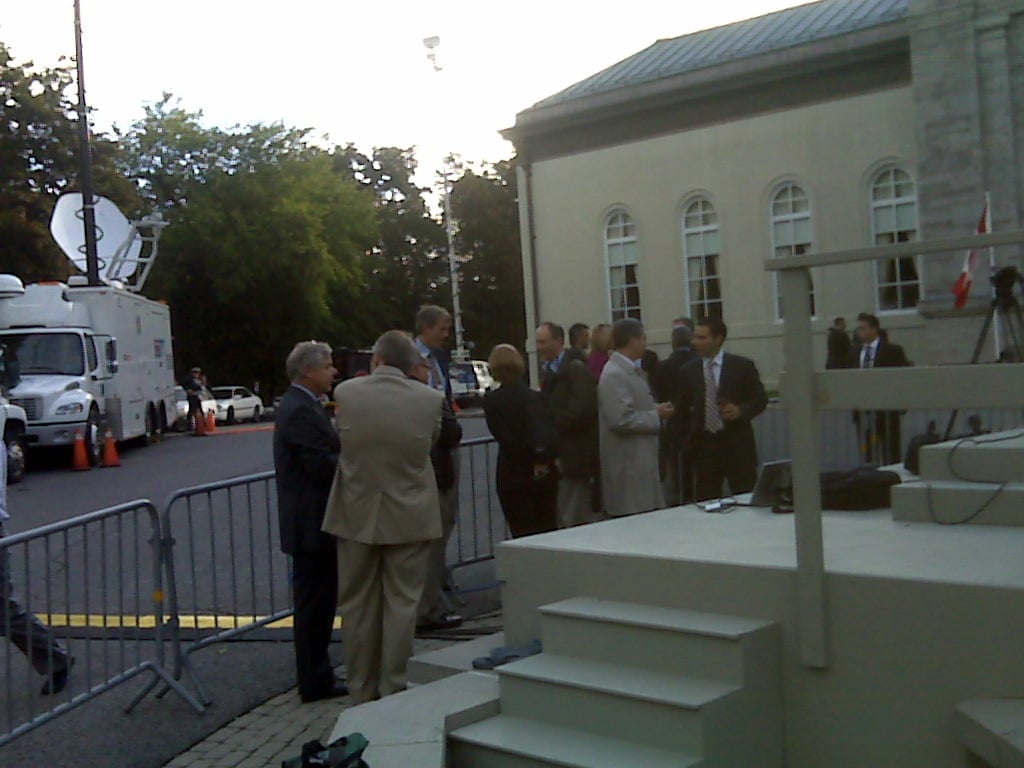 I think this was right around when we got a two minute warning that the PM was finally on his way. 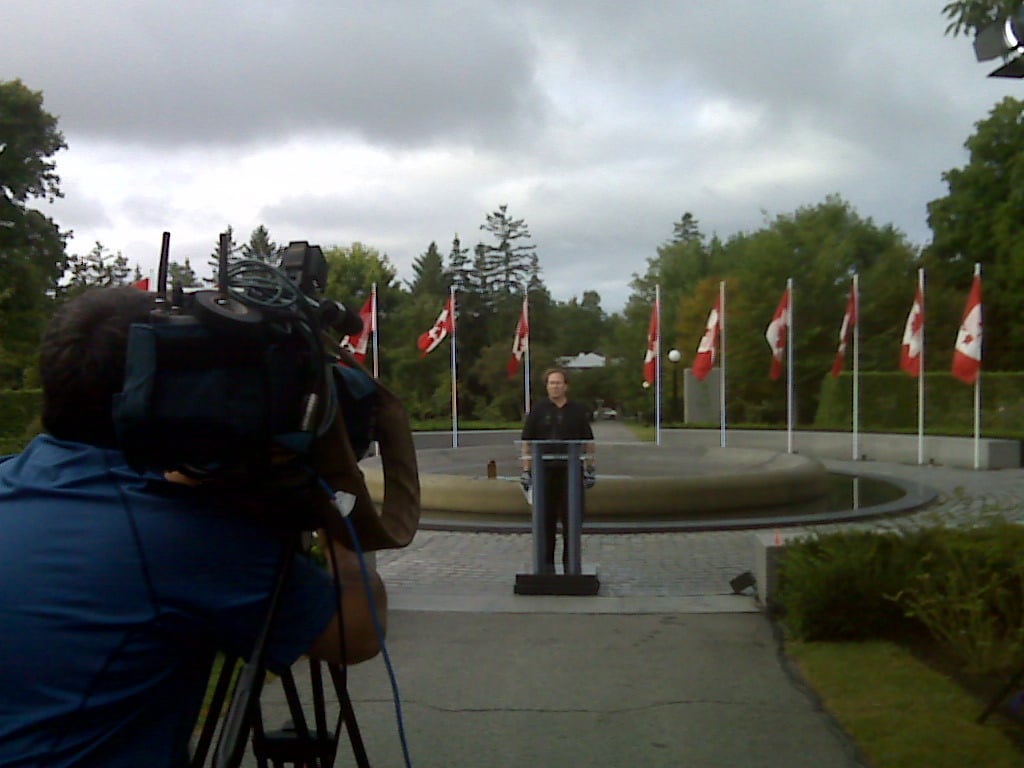 It's the sound check ... that never ends ... it just goes on and on, my friends. Hee. The PM spent far longer than expected with the GG - so much so that at one point, we wondered whether she actually had said no. 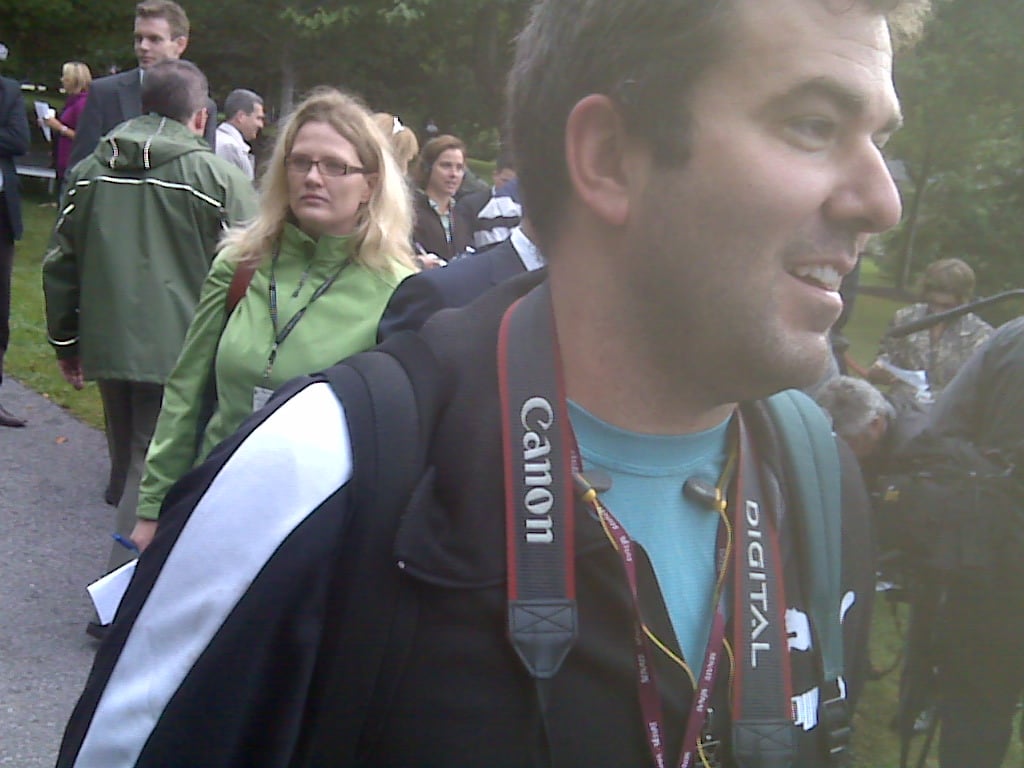 A totally and wonderfully random shot -- I think at this point, I was just holding my berry in the air and clicking blind, which is what you do when you're too short to be able to see what's happening. In the corner, you can see Colleague Wells striding purposefully towards a remarkably sanguine Kory Teneycke; the Winnipeg Free Press' fabulous Mia Rabson is in green, and the guy who takes up most of the shot is Jake Wright, who is almost always on the other side of the camera. Hah! Gotcha! 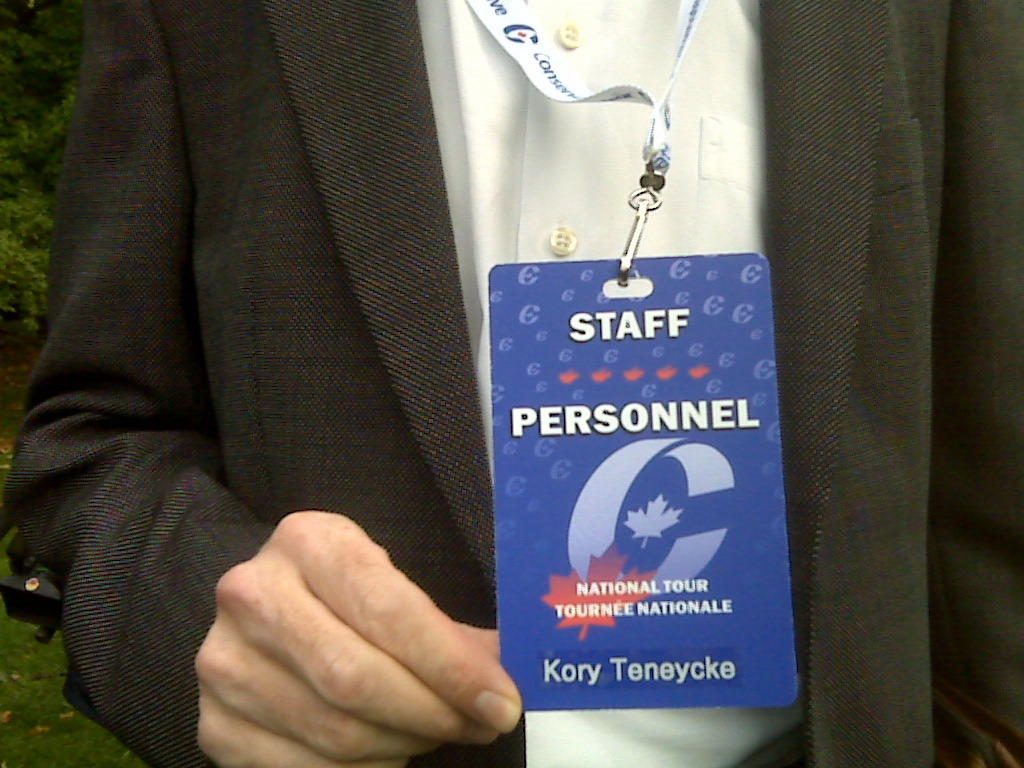 See what I mean about the sanguineness? (Why isn't sanguinity a word, by the way?) I asked if I could take a picture of his oversized pass, and he just -- let me do it. I didn't have to put my name on a list or anything. He also took my request for a souvenir lanyard under advisement. My goal is to get one from every campaign, and weave them together as a symbol of nonpartisanness, or braiding skills, or something like that.

FILED UNDER: behind the scenes election 2008 Election Watch ITQ BerryCam no they didn't let us film the actual dropping of the w photoblogthinging Rideau Hall