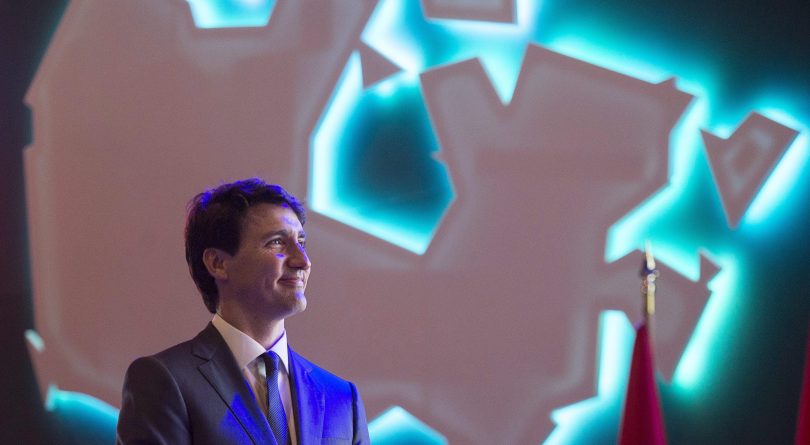 Prime Minister Justin Trudeau watches a video as he delivers a keynote address at the Federation of Canadian Municipalities' 2018 Annual Conference in Halifax on Friday, June 1, 2018. (Andrew Vaughan/CP)

The most pressing preoccupations of Canadian politics in this new globalized age—the rise of China, our aging workforce, the advent of artificial intelligence, global warming—are unlike anything that’s come before and demand an entirely new strategic vision.

Actually, scratch all that. As last week’s blur of developments hammered home, Justin Trudeau’s main worries these days would look strikingly familiar to just about any past prime minister. Canada’s continuing economic dependence on the U.S. market. Fractious provinces thwarting attempts to forge national projects and policies. Heavy reliance on natural resource wealth. All of these factors made the Trans Mountain pipeline dispute a classically Canadian clash.

These problems have been circling around Trudeau since his election in the fall of 2015. But it was only last week that they slammed into his government with full force, shattering what was left of the illusion that he was governing in unprecedented times. Instead, historic precedents feel urgently relevant.

Start with Trump’s tariffs on steel and aluminum, which hit not just Canada, but also Mexico and the European Union. Back in 1971, then-president Richard Nixon slapped import surtaxes on just about everything from just about everywhere. The world was outraged. The government of then-prime minister Pierre Trudeau (the current PM’s father, of course) concocted what was dubbed the “Third Option,” its label for somehow making Canada less reliant on U.S. trade and investment.

Decades later, Mitchell Sharp, who as Trudeau’s Secretary of State for External Affairs was closely involved in concocting the Third Option, admitted in a speech that it “wasn’t attempted and was probably too difficult to achieve, given the overlapping jurisdiction of the federal and provincial governments.”

Still, the temptation to look beyond the U.S. arises every time an administration in Washington makes Canadian economic life particularly difficult. Even former Conservative prime minister Stephen Harper, an instinctively pro-U.S. kind of guy, was susceptible. In late 2007, deeply frustrated by American “border thickening” restrictions on Canadian imports, Harper told me in an interview that he was fed up with trying to restore a “special relationship” with the U.S. to the point where he was pondering new strategies for “how we’re going to come to deal with it as a country.”

So Trump is only amplifying and distorting, in his peculiar way, what is really an old, recurring challenge—and a constant in Canadian foreign and economic policy. Similarly, on the domestic front, the course of federal-provincial affairs never did run smooth, as the Trudeau Liberals are now discovering.

MORE: What do Trump’s tariffs mean for Canada?

Not that they didn’t give mastering fed-prov relations a solid try. Their deal to reform the Canada Pension Plan, their hardball negotiation of separate health funding deals with each province, their landmark Pan-Canadian Framework on Clean Growth and Climate Change—all showed these federal Liberals could get stuff done inside Canada’s unwieldy federalist framework.

But the road ahead now looks far rougher. In fact, Trudeau’s strategists say they pushed for early breakthroughs, especially on CPP and climate change, partly because they foresaw how provincial elections might rob them of key cooperative partners. Sure enough, it was the election of an NDP minority regime in B.C. that turned the Trans Mountain pipeline into a crisis.

Even worse for the federal Liberals, the possibility of Doug Ford winning in Ontario this week, and then Jason Kenney in Alberta next year, makes Conservative governments opposed to their centrepiece climate-change accord a strong possibility in two crucial provinces. The prospect of Ottawa having to force carbon pricing on Ontario and Alberta—rather than having these two big economies on board as part of the pan-Canadian deal—could recast Trudeau as a PM who must impose, rather than inveigle, to get stuff done.

A connecting thread between bilateral friction with the U.S. and the frustrations of federal-provincial relations is Canada’s heavy reliance on natural resources. Often in Canadian history, resource policy—whether it’s about Quebec’s hydro-electricity, or Newfoundland’s cod, or Alberta’s oil—dominates regional politics. In his 2014 biography Common Ground, Trudeau observed that natural-resource development policies are “among the handful of big issues that define our success as a country.”

Perhaps that’s true of the Trans Mountain pipeline expansion. That project neatly connects the other the two other perennial worries highlighted here—diversifying away from the U.S. market and managing inter-provincial tensions. After all, Trans Mountain’s purpose to is to sell more Alberta heavy oil to Pacific buyers through a Burnaby, B.C., port, diverting a little away from the too-dominant U.S. market for Canadian fossil fuels. And the dispute over the project—the B.C. government’s resistance to tripling Trans Mountain’s capacity, Alberta’s insistence that it happen—forces Trudeau to be resolute.

So he’s buying Trans Mountain. He’s battling Trump on U.S. network TV. He’s bracing for even more difficult days ahead with the premiers. These are all reactions to the old pressures that reliably force their way onto the agendas of prime ministers trying to run a country largely defined by its proximity to the States, by its strong provinces, and by its natural resource endowment.

None of this means that Asian markets don’t need sustained attention, that the demographic shift isn’t fundamental, that AI isn’t reshaping industries, or that climate change isn’t catastrophic. It just means that Trudeau and his government must somehow make sure the old worries don’t keep them from getting around to addressing these new ones, too. Last week left little doubt about how difficult that test will be.