Canada once had a robust national housing program. Can we do it again? 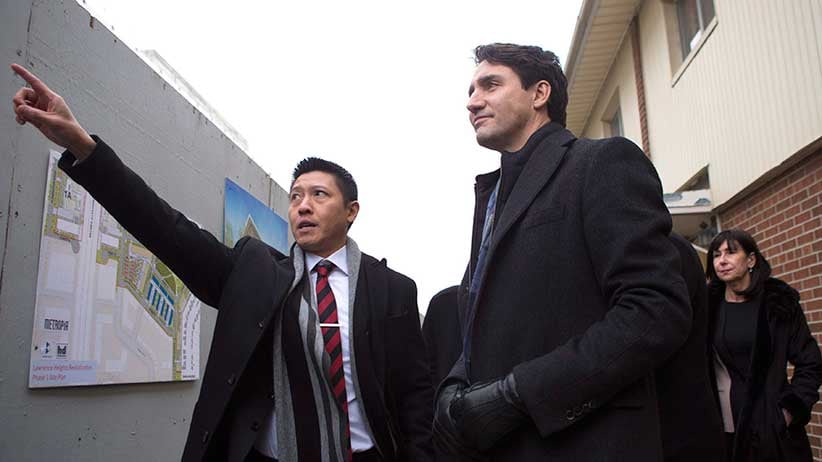 With the announcement of his national housing strategy on Wednesday, Justin Trudeau has signalled the return to an era of federal housing responsibility—a bygone legacy of his father’s.

Grabby headlines Wednesday afternoon boasted a $40 billion commitment to social and affordable housing over ten years, 100,000 new affordable units to be built, extending housing subsidies that were slated to expire, and deeming housing a right for all Canadians.

“This is the single biggest commitment we’ve seen since the cut backs started in the 1990s,” says Michael Shapcott, director of the Canadian Alliance to End Homelessness and a former adviser to the Ontario Minister of Housing.

Shapcott, a long-time housing advocate, is referring to systematic roll-backs of the federal housing program introduced under Pierre Elliott Trudeau. While the federal government had had a role in housing since the mid-1930s, the program thrived from the late 60s to the early 90s. The period marked a shift towards non-profit and co-op housing, as the feds took a more active role in making sure Canadians had access to affordable homes. Between 1973 and 1993, 600,000 new units were added to subsidized housing stock, which the feds funded through agreements with housing providers—be they non-profits, housing co-ops, or municipalities.

“Canada actually set a bit of a pace for the rest of the world in reducing poverty in that time,” says Shapcott, noting that housing, along with other social policies, played a significant role in that regard.

Then, in the 1990s, “the federal government got bitten by the austerity bug,” Shapcott adds. In 1996, under Jean Chrétien, the Liberal government ended all funding for social housing, and downloaded responsibility for existing and new housing onto the provinces. That involved amending the National Housing Act to absolve the Canada Mortgage and Housing Corporation (CMHC)—a federal crown corporation—of most of its social and affordable housing commitments.

In real terms, those policy changes translated into a rise in mass homelessness over the last 25 years as housing needs soared and resources plummeted, according to a report by Stephen Gaetz, a York University professor and director of the Canadian Observatory on Homelessness.

READ: A roadmap for bringing sanity back to housing markets

“The practical impact of the federal government withdrawing from housing in the 1990s was immediate and severe,” says Shapcott, pointing to growing subsidized housing waitlists as a unit of measurement. In Vancouver, for instance, 5,000 households are waiting for housing, 25,000 families or individuals are waitlisting in Montreal, and in Toronto, that number is pushing 200,000.

In a media briefing hosted by the CMHC, officials emphasized the extent to which the plan “re-establishes a federal leadership role in housing.” To a certain degree, that’s true. The plan shifts the trajectory from decreasing housing support to near extinction to increasing it. In 2016, for example, the federal government spent $15 million in new funding on housing. In 2018/2019, when dollars start flowing through the national housing strategy, the government plans on committing $1.5 billion in new funding, that budget growing to almost $3.4 billion by fiscal 2027. The plan also renews CMHC’s mandate to social housing, in practice if not on paper. And it removes Canada from the lonely list—on which we were the sole occupant—of G8 countries without a national housing strategy.

READ: Inside the taming of CMHC

Indeed, $40 billion over 10 years is a substantial sum, but it’s contingent on provinces and territories price matching the federal contribution. From that perspective, the plan is nowhere near as robust as the one implemented under Trudeau senior in the 1970s. David Hulchanski, a professor of housing and community development at University of Toronto, tracked federal housing spending from 1980 to 1989, and noted that the feds alone spent $14.5 billion on housing during that period. That’s equivalent to $30.4 billion today. If the new program rolls out as planned, the federal government will contribute roughly $26 billion over the same number of years. Likewise, the sheer number of affordable housing builds (and the term “affordable housing” has yet to be agreed on) will be markedly less under the new plan: 100,000 units in ten years compared to almost 600,000 between 1973 and 1993.

“It won’t be of the same scale as the [former] program, and arguably we’re in much worse shape in terms of housing now than we were in 1973,” Shapcott notes. “It doesn’t equal the amount of money we’ve lost since the 1990s,” he adds, “but it’s a heck of a good start.”