Even staunchly pro-choice respondents find denying job money regardless of how it will be spent is unfair, according to a survey by the Angus Reid Institute 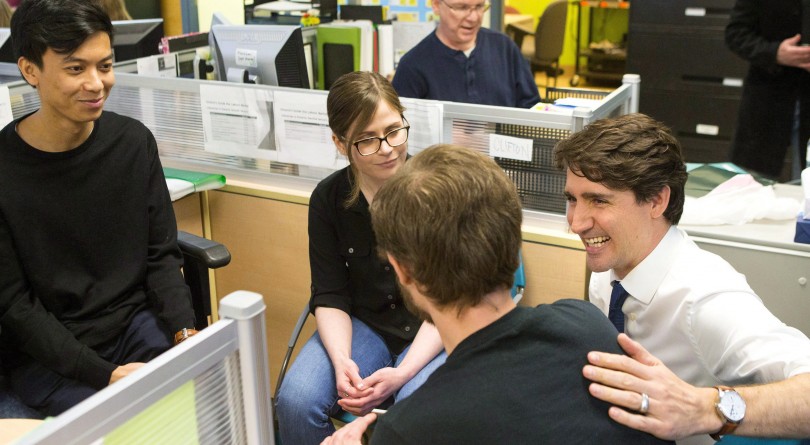 Prime Minister Justin Trudeau talks to clients and staff during a visit to the Employment Services Centre of WoodGreen Community Services in Toronto on Wednesday March 7, 2018. THE CANADIAN PRESS/Chris Young

The Liberal government may have overplayed its hand in requiring organizations applying for student summer job grants to sign an “attestation” confirming their core mandate respects abortion rights, according to a new poll.

The report, from the Angus Reid Institute, suggests that Canadians are evenly split on the issue, with 50 per cent saying the requirement is fair, while 50 per cent say it is not.

Of Conservative supporters, 68 per cent say it is unfair, while 41 per cent of Liberal voters and 44 per cent of NDP partisans agree. 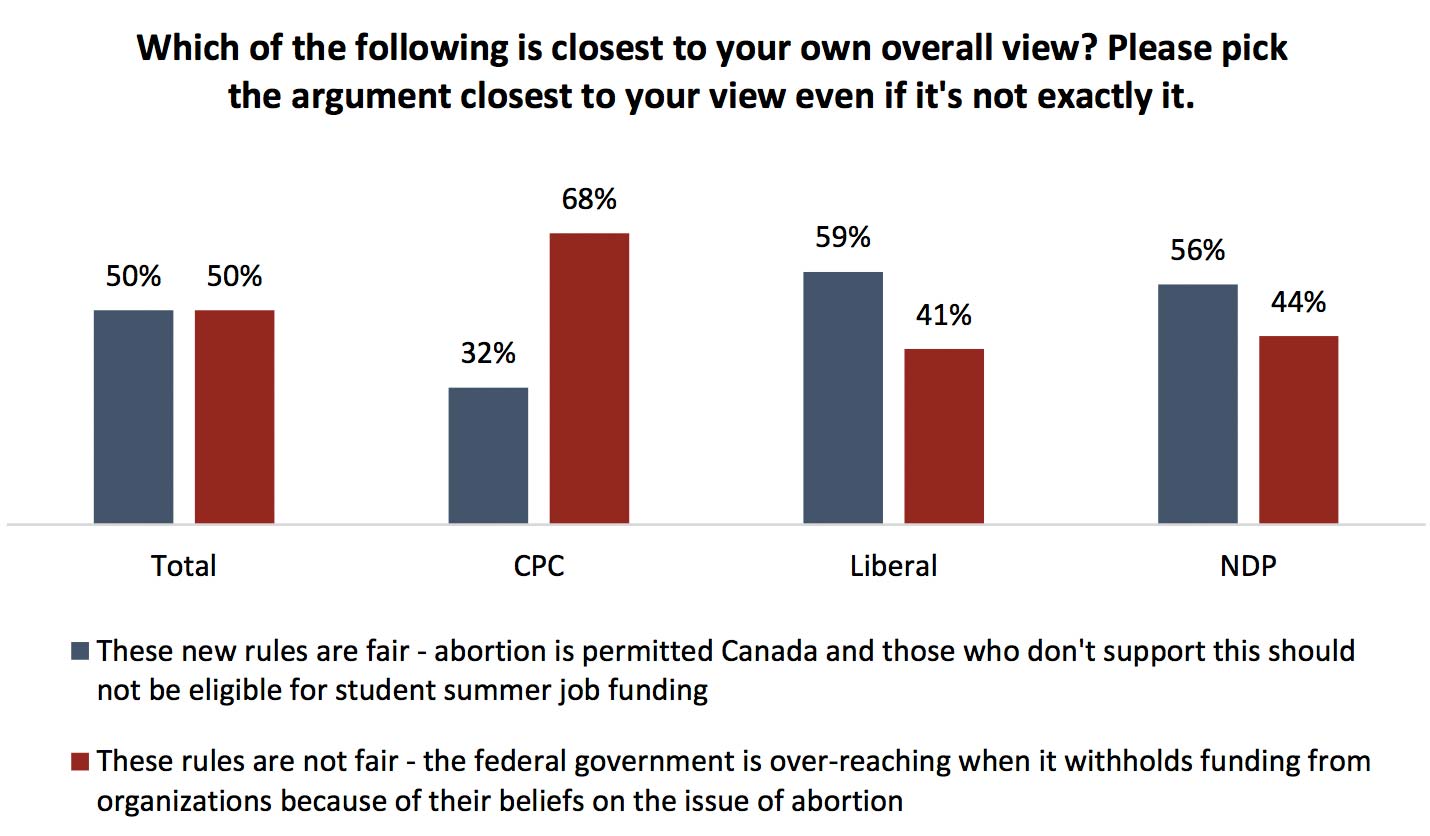 “Even cutting across the political spectrum, for many Canadians, this is not necessarily an issue about abortion now, but it is one about freedom of conscience and freedom of belief,” says Shachi Kurl, executive director of the research firm.

The institute also asked people about the funding requirements under two different scenarios. In the first, a hypothetical organization was a religious group morally opposed to abortion, which applied for funding to hire students to run a soup kitchen for the homeless, with no role in anti-abortion activities. In that scenario, 73 per cent of respondents said such an organization should get federal funding.

“In a scenario where you have a group that is morally opposed to abortion but isn’t going to be using the funds for that, that is something across the spectrum where people say, ‘Yes, that organization should be able to access the funding,'” Kurl notes.

In a second scenario, the hypothetical organization was again a religious group morally opposed to abortion, but they wanted funding to hire students to distribute flyers advocating for stricter abortion laws in Canada. In that imagined scenario, just 37 per cent of Canadians thought the organization should get funding, including 47 per cent of Conservative supporters, 28 per cent of Liberals and 38 per cent of NDP voters.

Whether or not an organization planned to use the funding to hire students to be directly involved in anti-abortion work is the “hinge point” for public opinion on this, Kurl says, and the Trudeau government denying money to organizations regardless of how it will actually be spent is the problem for many voters.

“This is something that I don’t think sits right with a number of people, who may be advocates of saying, ‘Yes, we should have access to abortion,’ but who maybe don’t like the idea of forcing or requiring organizations to make this attestation if what they’re seeking federal funding for has nothing to do with that issue,” she says.

Last year, the Canada Summer Jobs program dished out more than $200 million to fund nearly 70,000 student jobs. The Liberal government’s changes to the rules of the program for 2018 generated plenty of political headlines and hours of Conservative badgering during Question Period.

But the Angus Reid Institute poll suggests there may have been a strong Ottawa-bubble effect going on. Fully 56 per cent of respondents said they had heard nothing at all about the issue until the polling agency asked, while only 20 per cent said they had heard a fair amount about it. Perhaps logically, those who were following the debate closely were much more likely (68 per cent) to say the new rules were unfair than those who were oblivious to the issue (43 per cent).

Kurl notes that with the Liberals and Conservatives in a virtual dead heat in most recent polls, the Trudeau government might have miscalculated in drawing a hard line here, based on the way voters perceive their overreach.

“I think this is the type of thing where this is not an issue that the Trudeau Liberals maybe needed to double down on,” she says. “Or if they were going to, (they) perhaps needed to be aware of the blind spots that they were dealing with.”