What room can Andrew Scheer win, if not this one?

Jason Markusoff: Alberta Conservatives gathered to listen to their federal party leader. They were not very impressed. 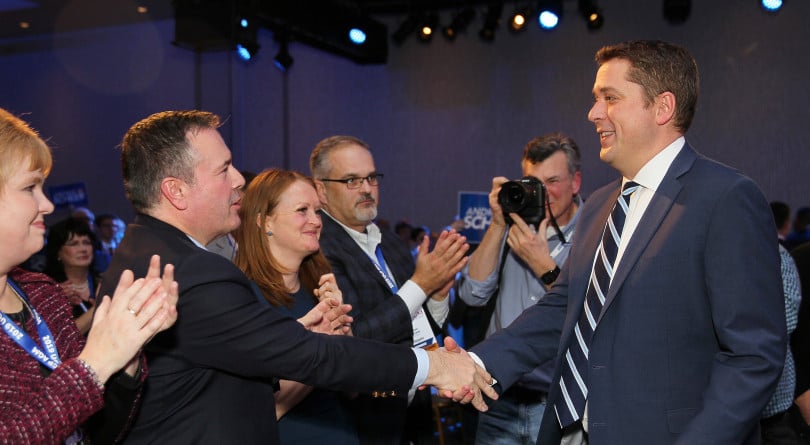 Scheer shakes hands with Kenney after his keynote speech at the Alberta United Conservative Party annual general meeting in Calgary on Nov. 29, 2019 (THE CANADIAN PRESS/Dave Chidley)

Andrew Scheer stood in front of a room full of Alberta Conservatives who were given blue “Andrew Scheer” signs to wave jubilantly as often as they pleased. With new critics of his leadership emerging almost daily—social moderates, social conservatives, Quebecers, Ontarians, assorted party veterans—the current Conservative leader delivered a well-scripted line about how uninterested he was “in what the talking heads, the naysayers and the people who make their money by stirring up division in our party have to say.”

Rather, as the runner-up party assesses itself, Scheer wants to hear from the “Conservatives like you,” he told the convention hall—people who knock on doors, are on the ground, and work hard.

Scheer, no doubt a busy man, did not stick around after his Friday night speech at Alberta’s United Conservative Party weekend convention to find out what the grassroots wanted. This Maclean’s writer did. It turns out that an awful lot of Alberta Conservatives want a new leader. Others would rather Scheer stay on, and they dread the ordeal of another democratic headhunting endeavour. At best, this group is mixed on Scheer’s future. And if he can’t solidly win the room among active Alberta Conservatives, in a province that voted 69 per cent for his party in October and whose oil industry he’s continually championed, one might ask: what room can Andrew Scheer win?

In Jason Kenney’s Alberta, a couple things have galvanized Tories: a hatred of Justin Trudeau, and winning. The same holds true in most of Canada—the lead conservative party has won all recent provincial contests from New Brunswick on west to the Continental Divide. They wanted to win; they expected to win. Scheer told them they would win. They did not win. They suspect they know a key reason why.

“We need to win in Ontario, so maybe that means we need a leader from Ontario,” says Martin Norman, a convention-goer from Edmonton. It’s striking, that in this moment when right-leaning Albertans are so frustrated that Confederation isn’t providing them what they want in the West—respect, pipelines, resource-friendly legislation—that they’d be particularly attuned to what Ontarians might want when it comes to Conservative leadership. But they know they can’t really run up the seat total in the Prairies much more than they did, so victory means caring what Brampton and Kitchener want.

Alberta Tories have, in Kenney, a leader that excites them. Similarly to Stephen Harper, charisma is not a part of Scheer’s brand. But at least with Harper, Conservatives grew enamoured by his toughness. Many want to feel something like that again.

“I door-knocked in seven ridings in three different (western) provinces, and there wasn’t a single door that I knocked on where I found  someone who wanted to vote for Andrew Scheer,” says Jordan Katz, a Calgary activist who was a 2004 CPC candidate Ontario. There are groups of Scheer skeptics and supporters throughout Alberta, just as in the rest of Canada, he says.

The Alberta Conservatives who want him to stay tend to say fewer pro-Scheer things and more anti-leadership-review things.

“I don’t want the party to go through a big mess-up,” says Maxine Sweeney of Vermilion, in northeast Alberta. He did improve the party’s seat count from 2015, so “don’t be tearing him apart,” she says.

“Any kind of disunity is detrimental,” says Lea Switzer of Lethbridge, in the province’s southwest. She believes Scheer can win if he holds the line.

Chris Davis, a lawyer in Fort McMurray, says Scheer is maturing in his role. He’s weary of his party’s “ritual bloodletting. I wish somehow we’ll learn to not rinse and repeat this cycle, again and again.”

Kenney himself, in a post-convention meeting with reporters: “There’s no point in getting into a partisan civil war that’s just a huge distraction from the task at hand which for him is to hold the federal government to account and for us to get things done for Alberta.”

It makes sense that Conservatives’ public defence of Scheer tends to be pragmatic, given how the scrutiny focuses on why he lost, says Dan Williams, a rural Alberta MLA and former Kenney aide. He’s made headlines lately for his controversial (and likely doomed) private member’s bill to strengthen “conscience rights” for physicians who oppose services like abortion, contraception and medically assisted dying. He praises Scheer as a “movement Conservative” who is principled and deeply committed. “He defends conservatism as an idea.” Williams says he speaks to provincial supporters all the time who think Scheer’s doing the right thing.

And here’s where we parse the significance of standing ovations, or at least the ovations themselves. The UCP convention hall stood and applauded at the end of Scheer’s speech, but the clapping was brief and tame, polite and respectful. His 19-minute speech roused listeners to stand twice—the first time, a standish ovation when he talked about defending Alberta’s interests, and a second, heartier bout of cheers when he praised Kenney’s accomplishments. The following night, the premier brought his flock to its feet several times more, in a speech triple the length. Some Conservatives said the reception to Scheer’s address was more generous than expected. Lower expectations might be what Scheer needs in his corner lately.

Before the speech, there were rumours of a group walkout. The group numbered fewer than a dozen, among 1,600 attendees. At this stage in a potential leader-ousting, few members are keen on stunts of public defiance. Rather, the sign of deep trouble in Scheerland is the numerous Tories who don’t want to be quoted by name who are convinced he’s toast—active federal and provincial politicians among them. It’s the loud, indifferent chatter from the back one-sixth of the ballroom throughout the leader’s speech. It’s the fact that only a few people waved around those giveaway Scheer signs during his speech. It’s the sentiment even among some supporters, that the public demands for Scheer’s head will keep growing. His pleas for party unity are too late when the question of his own future may be the most animating division in the Conservative party.

Mavis Christie, a Calgary Conservative, wrestles with this division herself. “He’s a very good man with very good values who would do well for the country,” she says. His speech seemed sincere to her. But, she adds, she constantly hears concerns from fellow Tories that he can’t stand up to Trudeau and succeed.

“They like him as a person, but can he play with the big boys?”

She pauses before answering her own question. She casts her gaze downwards.