The battle over the new NAFTA moves to the Hill 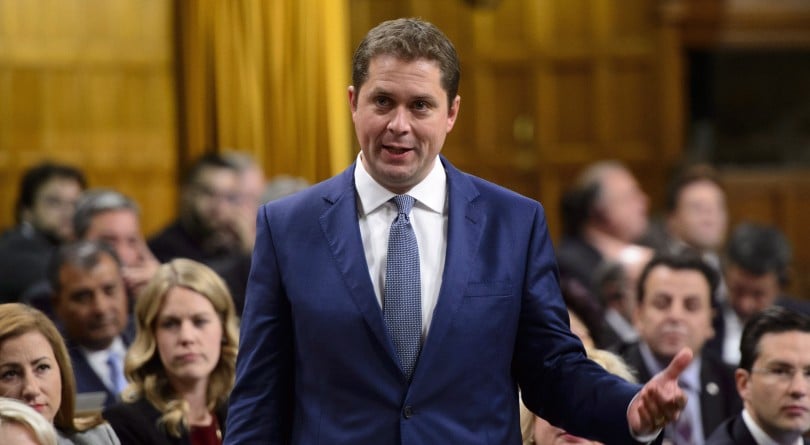 Conservative Leader Andrew Scheer stands during question period in the House of Commons on Parliament Hill in Ottawa on Monday, Oct. 1, 2018. THE CANADIAN PRESS/Sean Kilpatrick

What were Conservatives saying, as Andrew Scheer rose in the House of Commons to quiz Prime Minister Trudeau over the new North American trade deal?

You had to ask, didn’t you. What Conservatives were saying seemed to depend to some extent whether they are currently under the supervision of the Chief Opposition Whip. Those who currently revolve in orbits beyond Mark Strahl’s reach actually seemed pretty OK with USMCA, as we are apparently calling the new trade deal.

“A NAFTA deal in principle will help ease investor anxiety, stabilize trade exposed sectors and reassure the world that North America remains committed to free trade, Rona Ambrose, who used to occupy the seat from which Scheer was speaking, wrote on Twitter. “Congrats to Team Canada.”

READ: How NAFTA was saved: The bitter fight and the final breakthrough

“NAFTA 1.0 was not perfect, nor is the USMCA,” her longtime colleague James Moore tweeted. “But the most successful trading alliance in history will continue. Lots to discuss & analyze to be sure. Bottom line: free trade faced its greatest threat to date and free trade won.”

“I have not yet had the opportunity to study the full text — and frequently the devil is in the details — but Canada appears to have achieved most if not all of its important objectives in this lengthy and challenging set of negotiations,” Brian Mulroney said in a statement.

And from Kevin O’Leary, the former Conservative leadership candidate who dropped out because — well, because he just didn’t want to make everyone else look bad, this cryptic comment: “This years harvest of #olearyfinewines looks like it’s going to be the best ever. 2018 was a spectacular year. Natures work is over now mine begins!”

So perhaps it was understandable that Scheer proceeded cautiously as he faced Trudeau to discuss the effects of the new trade agreement. “Mr. Speaker, we’re awaiting the details of the new free-trade agreement with Mexico and the United States to evaluate all its effects,” he said in French. “We do know, on the other hand, that the prime minister made concessions regarding access to the dairy market as well as for Class 7 milk.” (Class 7 milk is — oh here, it’s in here somewhere.)

“Can the Prime Minister tell us whether he has obtained concessions on the level of support the Americans give their [dairy] industry?” Scheer asked.

Trudeau got up and said USMCA is a good deal and that dairy farmers will be compensated for losses. Scheer was not mollified. “Mr. Speaker, he did not answer the question,” he said.

“When the Prime Minister offered to renegotiate NAFTA,” he continued, “there were no sunset clauses, steel tariffs or auto quotas and we already had the dispute-resolution mechanism, so these are not new gains in this deal.”

This was at least mildly revisionist history. NAFTA was not renegotiated because Trudeau had spontaneously offered to renegotiate it. In fact the new President had campaigned for more than a year on a promise to overhaul or cancel the trade pact, which he often called the worst ever. The sunset clauses and auto quotas were indeed not in the original agreement: adding them was Trump’s idea. The steel tariffs were never part of  NAFTA, either before or now. Cancelling the so-called Chapter 19 dispute-settlement mechanism was U.S. Trade Representative Robert Lighthizer’s opening volley in this negotiation, more than a year ago.

MORE: NAFTA? USMCA? Trumpta? What should we call this new deal?

Over the first half of Question Period, however, it became clear that Scheer regarded Trump’s demands as bagatelles that Trudeau should have had no trouble brushing aside. Or at least, that if Canada was to be stuck with Trump’s impositions, Trudeau should have forced comparable retreats on the Americans. In other news, Scheer’s questions suggested he thought the new trade deal is a failure. He was so reluctant to say it, however, that it fell to Trudeau to put words into his mouth. “Mr. Speaker, I am sorry to hear that the official opposition’s official position seems to be that this is a bad deal.”

Perish the thought. “Mr. Speaker, we are going to evaluate this deal to determine if it is a good deal,” Scheer responded. This evaluation would come later, and in the meantime Scheer was — well, he was just asking some questions, is all. “One of the ways that we will be able to determine” whether USMCA is a good agreement “is to find out where Canada gained.”

So the Conservatives’ first-day reaction had a few layers to it. First, an elaborate show of open-mindedness. No rush to judgment here. Second, a running tally of Canadian concessions. Third, a series of invitations to the Liberals to brag about the concessions they had forced upon Trump. Fourth, one presumes, a kind of national pedagogical moment as Canadians realized that, for all Trudeau had given up, he’d gained nothing.

Canadians will decide whether they have reached the conclusion Scheer was hoping for. Tellingly, in the last third of Question Period, the official opposition went back to asking about convicted child-killer Terri-Lynne McClintic’s transfer to an unfenced Indigenous healing centre. On this issue, the number of prominent Conservatives who publicly disagree with Scheer is smaller. For now it seemed like safer ground.

What was also striking about Scheer’s line of questioning on trade was the way it positioned Trump, not as an admirable figure, but as a menace. Trudeau’s flaw, in this telling, was that he had been too much of a pushover, that he had let Trump walk all over him. This reminds us that the Trump presidency presents a rhetorical challenge for Canada’s Conservatives, who lose more than they stand to gain by seeming too close to Trump, or too admiring of him.

The problem with the why-weren’t-you-tougher line of questioning was that it contradicted advice Trudeau received last autumn from another prominent Conservative not currently serving in Scheer’s caucus, Stephen Harper. Indeed, all the former colleagues, leaders and prime ministers crowding around Scheer as he sought a path forward on USMCA complicated his task rather more than they did that of Scheer’s opponent.

Opposition parties sometimes ditch a big issue in favour of a smaller one that offers more immediate political opportunity. I’ve seen both Liberal and, back in the day, Canadian Alliance oppositions ignore popular federal budgets in favour of smaller-scale issues that were less tricky to attack. It’ll be interesting to watch how long Scheer continues to ask questions about the new trade deal before moving on.