Maclean’s Bulldog, Sept. 14: Your daily rundown of what happened on the U.S. campaign trail 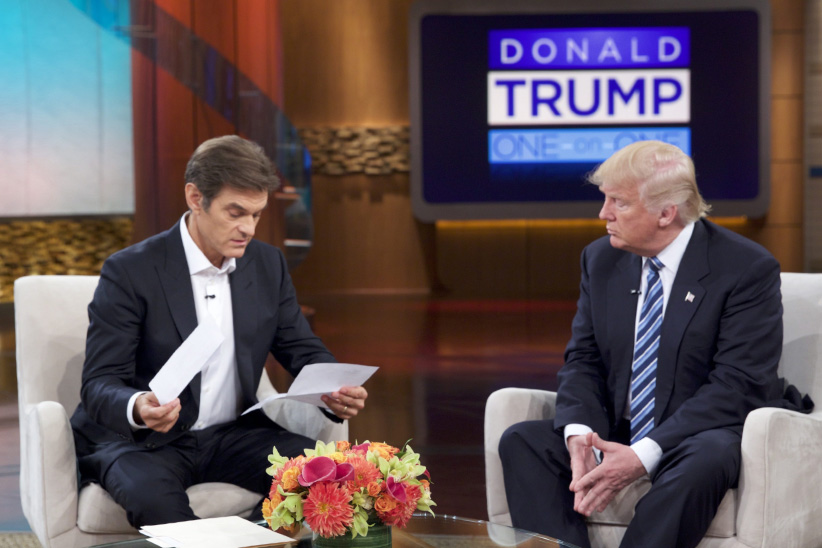 Dr. Oz and Republican presidential candidate Donald Trump during a taping of “The Dr. Oz Show,” in New York. (AP)

Sept. 14, 2016: Our daily Bulldog election-campaign recaps return as a critical stretch of the U.S. election begins. On Wednesday, Donald Trump found himself leading the polls in Ohio, a state that’s been picking winners for 50 years now. A series of leaked emails from Colin Powell revealed how Powell, the former Secretary of State under George W. Bush, feels about the Republican nominee. (In short, not very good.) Meanwhile, Hillary Clinton took one last day off before a planned resumption of campaigning on Thursday, but that didn’t stop her team from directing a slew of questions to Trump via Twitter after a Newsweek article shed some light on his business dealings.

As Ohio goes, so goes the nation?

One of the most favourable new polls for Donald Trump is a Bloomberg Politics poll that shows him carrying a five-point lead over Hillary Clinton in the crucial swing state of Ohio. The poll, taken during the weekend of Clinton’s “basket of deplorables” comments, indicates that Trump may have more of a shot with Ohio’s white blue-collar voters than John McCain or Mitt Romney, both of whom lost the state to Barack Obama. Ohio has voted for the eventual winner of every U.S. presidential election since 1964.

Can the Democrats win back the Senate?

This seemed like it should have been a good year for Democrats’ chances to win a majority of seats in the U.S. Senate. But despite many vulnerable Republican-held seats and an unpopular Republican candidate, the party isn’t faring well as it tries to capitalize on pickup opportunities, like Ohio, where former governor Ted Strickland is running well behind his Republican opponent. Attempts to tie Republican candidates to Trump have so far proved unsuccessful. If the Democrats don’t win back control of the Senate in this cycle, they’ll have a hard time doing so in 2018—when they may be on the defensive in their own territory.

Since Donald Trump dumped his previous campaign chairman and installed a new team, he’s received different advice from different advisers. According to Monica Langley of the Wall Street Journal, Breitbart‘s Steve Bannon wanted Trump to stick with loud campaign rallies and a hard-line position on deportation, while campaign manager Kellyanne Conway thinks the Republican nominee comes off better in quieter settings. If Trump seems like a different candidate at different times, it might just be that he’s getting different advice.

In a series of hacked emails leaked online, former Secretary of State Colin Powell called Trump a “a national disgrace” and an “international pariah.” That’s not to say Clinton fared much better in Powell’s missives, especially after it was revealed she tried to pull the four-star general into defending her email practices. “I didn’t tell Hillary to have a private server at home, connected to the Clinton Foundation, two contractors, took away 60,000 emails, had her own domain,” Powell wrote in one email. He also wrote: “[Clinton] could have killed this two years ago by merely telling everyone honestly what she had done and not tie me into it. I told her staff three times not to try that gambit. I had to throw a mini tantrum at a Hampton’s [sic] party to get their attention.”

In a Wednesday morning taping with TV celebrity Dr. Oz—to be aired on Thursday—Trump revealed that he weighed 267 lb. and takes the drug statin to keep his blood pressure low. Trump also produced a letter from Dr. Harold Bornstein, the same doctor who in five minutes wrote a letter for Trump stating that if he were elected would be “the healthiest individual ever elected to the presidency.” Outside of his high body mass index, the TV doctor reportedly sent Trump on his way with a clean bill of health.

Even before Election Day, Libertarian Party candidate Gary Johnson has accomplished what no third-party candidate has done in 20 years: appear on the ballot in all 50 states. Johnson won’t reach the threshold of 15 per cent in major polls to appear on the televised debates alongside Trump and Clinton, but for Americans dissatisfied with the two leading candidates, it’s a welcome change to see a third option for all Americans.

Remember in 2012 when Trump once offered to donate $5 million to charity if Obama released his college records and applications, plus his passport applications and records? Well now the founder of LinkedIn, Reid Hoffman, is using the same stunt against Trump, promising to donate up to $5 million if Trump releases his tax returns—something presidential candidates normally offer willingly.

Recommended Reading: What’s the story that got Clinton’s campaign up in a massive tweetstorm of 20 questions for Trump? Read Newsweek’s “How the Trump organization’s foreign business ties could upend U.S. national security“