Team Trump has pivoted to an attack on 'birthright citizenship' ahead of the midterm election—will his fearful base follow? 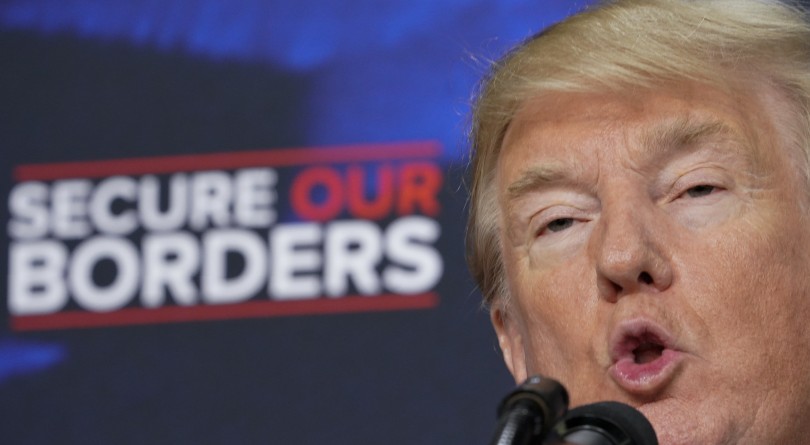 In a small corner of Donald Trump’s 2016 campaign platform sat a promise to end birthright citizenship — the policy by which any person born in the U.S. is deemed an American.

The proposal garnered little attention at the time; only a few interview clips feature candidate Trump railing against so-called “anchor babies.” But the idea resurfaced again last month when Michael Anton, a former spokesman for Trump’s National Security Council, wrote his first post-administration op-ed calling for the president to end the “absurdity” of birthright citizenship (which is embedded in the Constitution).

More recently, Fox News host Tucker Carlson took up the cause: If it’s possible, “why wouldn’t [Trump] do that?”

Why indeed? From the beginning, Trump’s campaign has aligned with the rise of anti-immigration sentiment on the right—that is, not just anti-illegal immigration, but anti all immigration, or at the very least demanding its dramatic reduction. “It’s the most anti-immigration administration since the 1920s,” said Alex Nowrasteh, the senior immigration policy analyst at the libertarian think tank the Cato Institute. The longer Trump holds office, the clearer that becomes.

In a moment long foreshadowed by the president’s unceasing focus on immigration—his Twitter feed exclamations about the border wall, deportations, MS-13 and DACA; his administration’s family separation policy and proposals to cut legal immigration by as much as 40 per cent—the fate of the U.S. midterms will likely hinge on the issue.

Two recent polls in June and July peg immigration as the top concern for voters, ahead of health care and the economy (which is doing very well).

Fox’s punditocracy is in lock-step. Carlson has blamed immigration for “radically and permanently changing” America and said Democrats see it as a way to seize power and hold it in a kind of a demographic “coup.”

This month, Fox host Laura Ingraham earned widespread scorn after she told her viewers, “It does seem like the America that we know and love doesn’t exist anymore” thanks to “massive demographic changes … foisted on the American people, and they are changes that none of us ever voted for, and most of us don’t like.”

CNN’s Don Lemon accused Ingraham of “firing up white fright.” She defended her remarks and said they had “nothing to do with race or ethnicity.”

What stood out to Robert P. Jones wasn’t the ideas behind Ingraham’s comments, but their sheer transparency. “I think what’s most outstanding about it, I guess, is just how clear it is,” said Jones, CEO of the Public Religion Research Institute (PRRI) and author of The End of White Christian America. Jones’ book was published just months before Trump’s win, and it looks at the broad demographic changes taking place in America. By 2043, the Census Bureau predicts America will be majority non-white. “This past year was the first year whites declined not just as a proportion [of the population], but in absolute numbers,” Jones told me. “We’re at a point where American children under the age of 10 are majority non-white.”

In a survey with The Atlantic last year, PRRI found that cultural anxiety among white working class voters was the greatest predictor of voting for Trump — and it’s a group that still retains strong electoral power. White adults without a college degree number 90 million and make up the majority of all white adults in America, according to 2015 Census data. “The measures we were using were things like, ‘Sometimes the county has changed so much, I feel like a stranger in my own country’ or ‘The U.S. needs protecting from foreign influence,’” Jones said. “What we can clearly document is negative attitudes towards immigrants and a sense that whites are facing as much discrimination as any other minority group,” he added.

The electoral math of a changing America certainly skews in favour of the Democratic Party, which attracts more women and non-white voters. Overall, Democrats have a 14 point lead when Americans are asked which party does a better job of dealing with immigration, according to the Pew Research Center’s recent survey. But Republicans are more likely to view immigration as the most important problem facing the nation.

PRRI research has found a majority of Republicans favour stricter immigration laws of all kinds, including preventing refugees from entering the U.S. More Republicans also view demographic changes as mostly negative rather than mostly positive and believe the country has changed for the worse since the 1950s.

Meanwhile, Trump and the GOP have put legal immigration in the crosshairs by investigating alleged fraudulent citizenship claims in order to strip people of their citizenship, pushing to end the visa lottery program and family migration (also called chain migration, and the way by which Melania Trump’s parents recently immigrated to the U.S.), and lessening the number of immigrants overall, including asylum seekers.

Illegal immigrants might have been the president’s early focus, but they’re dwarfed in numbers by immigrants in the U.S. legally by a factor of four to one.

In this, Nowrasteh sees a kind of bait a switch: While Trump has been softening the ground by claiming illegal immigrants are “infesting” the nation and leading chants for a border wall, a group of ideologues led by Trump’s senior advisor Stephen Miller, Attorney General Jeff Session and the Center for Immigration Studies, a hardline immigration think tank, have taken the debate into far more extreme territory.

“It’s an elite-driven phenomenon” of people who view legal immigration as a source of economic and cultural ill, said Nowrasteh, and he believes their policies are ahead of the base. He pointed to the GOP “compromise” immigration bill as a prime example: It would have traded amnesty for what the base views as “illegals” in order to dramatically reduce legal immigration, and it failed by a large margin in the House.

One influential group is the Center for Immigration Studies. Its tagline: “Low-immigration, Pro-immigrant.” It supports an end to birthright citizenship and has supplied the Trump administration with two appointees: Ronald Mortensen as assistant secretary of state for the Bureau of Population, Refugees and Migration at the State Department, and Jon Feere as a senior advisor at Immigration and Customs Enforcement.

Andrew Arthur, the Center’s resident fellow in law and policy, said the center wants to limit immigration to solely merit-based categories and focus on assimilation. “There is a fiscal cost to the United States from immigration, particularly family-based immigration, because there’s no guarantee that those individuals will bring with them the skills and abilities,” he said in an interview. He warned of the terrorist risk posed by immigration (the center has argued illegal immigrants are a source of crime generally), and said the country needs to save entry-level jobs for Americans. He rejected outright that immigration has anything to do with race. “To conflate the terms immigration and race would be inept,” he said.

The most common findings of academic peer-reviewed research on U.S. immigration show immigrants are less likely to commit crimes, require per-capita less financial support from the government and have a very small impact on wages, Nowrasteh countered (which he’s summarized here).

“They think immigration is something that makes the U.S. less American,” Nowrasteh said. “It’s good old fashioned 19th century-style European nationalism. It’s the idea that a nation needs to be homogenous to truly realize its potential and to prosper and thrive.”

The midterms will help answer just how closely the Republican base is aligned to that thinking. But the shift was inevitable for Trump. His brand requires hard lines and extreme rhetoric, which means it’s always pushing the limits. And he campaigned as the “last chance” to elect a Republican and fix immigration “because you’re going to have people flowing over across the border” who will be legalized and vote —“once that all happens,” he said, “you can forget it.”

If voting immigrants are the GOP’s problem, ending illegal immigration solves only a fraction of it. Thus, an op-ed on birthright citizenship carries the appearance of a test balloon sent out to determine the direction of the debate. To find the next convincing line in the sand. To save the America they know.