Donna Ferrato: 'What is wrong with white women?'

Donna Ferrato, the renowned photographer known for her work on domestic violence, looks back on the Women’s March as ‘the end’ 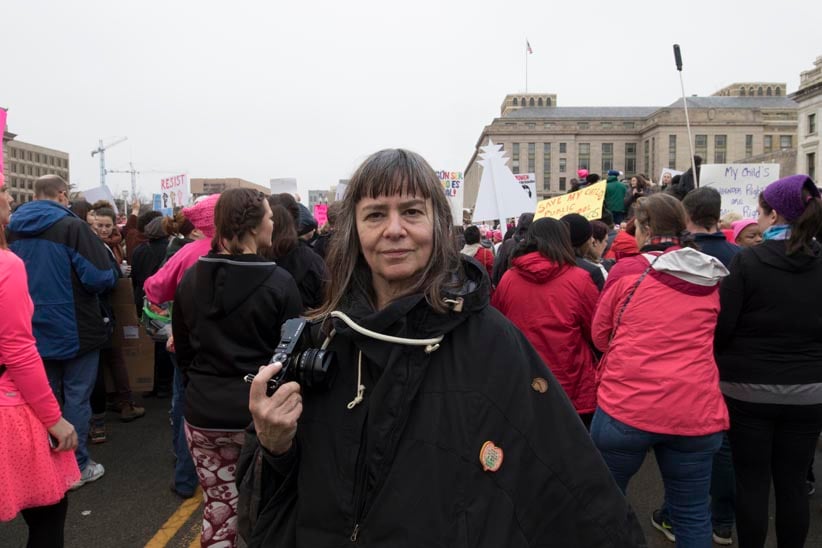 Saturday, Jan. 21, 2017, the day of the women’s march on Washington, held an electric energy for renowned photographer Donna Ferrato. She saw a “huge resistance wave” headed toward the new White House administration, a promise “we won’t go back” to Donald Trump’s vision of a once-great America.

Ferrato captured the scene for Maclean’s as hundreds of thousands of pink pussy hats paraded through the streets behind her (and millions more marched in cities across the globe).

“I know the price of democracy,” Ferrato said that day. “I know how precious it all is. And how we can lose it so fast.”

A year later, and those words may strike Trump’s critics as prophetic. Trump has indeed faced accusations he’s eroding American democracy through attacks on the media, a well-documented habit of lying and threatening the independent investigation probing his campaign’s ties to Russia.

Ferrato, 68, speaking to Maclean’s recently from her home in New York, said the “glitter” of the women’s march has long since faded.  In hindsight, she said, the march was “the end.”

Q: How are you doing?

A: It’s been… (pause) quite an eventful year. The blinders have come off, with the gloves. There’s no attempt to be kind anymore, to be considerate, to give people room to think and to make smart decisions. I feel we’ve been pushed to the brink, to be as vicious and angry and suspicious as possible.

The march was a wonderful thing. I enjoyed it very much. It was a moment in the year when I felt we could breathe and walk together and support each other and be happy to see each other side by side. Men, women, children, white women, black women, Hispanic women, Chinese women, Asian, Arabic, everybody. We were all together.

WATCH: Marching with Donna: Seeing the Women’s March through a photographer’s lens

Q: When did that happen?

Q: Are you talking about—?

A: I’m talking about, yes, Roy Moore. [Editor’s Note: Moore was the Republican candidate in Alabama to fill Attorney General Jeff Sessions’s Senate seat. He was accused by multiple women of sexual assault and pedophilia, and lost to Democrat Doug Jones.] And all the other men! All the other white women who are married to these men who are bowing and scraping. I’m talking about all the wives of these men who are serving in the White House, and when I say serving, I mean they are on their knees kissing ass every day. What is wrong with these women that they just look up at their men as though they’re gods?

Q: Where did that quote come from?

A: I’m reading Fire and Fury [an incendiary new book by controversial journalist Michael Wolff], which is an excellent book, and I totally recommend it. It takes the blinders off, so everybody can really see how these guys talk, how they think, why they do what they do. These guys are all broke, morally. They have no real vocabulary of decency and empathy. There’s nothing in this administration that points to compassionate thinking.

Everything! Honestly, Rosie, it’s everything we’ve been getting every single day. I don’t understand this kind of thinking that has been dormant. It’s been here for a very long time, but we liberals did not want to see it. We didn’t want to believe how racist people still were in this country. And now we’re seeing it, and for a lot of us it is so disgusting. You know, we feel dirty all the time, because of these white people and their racist, homophobic, anti-women mentalities.

What I’m telling you is kind of inflammatory, and it will piss some people off. I see it on Facebook when I talk about how I don’t trust some white women anymore. I don’t trust some women who look like me—that’s a crazy thing to have happen to you when you’ve lived for 68 years. 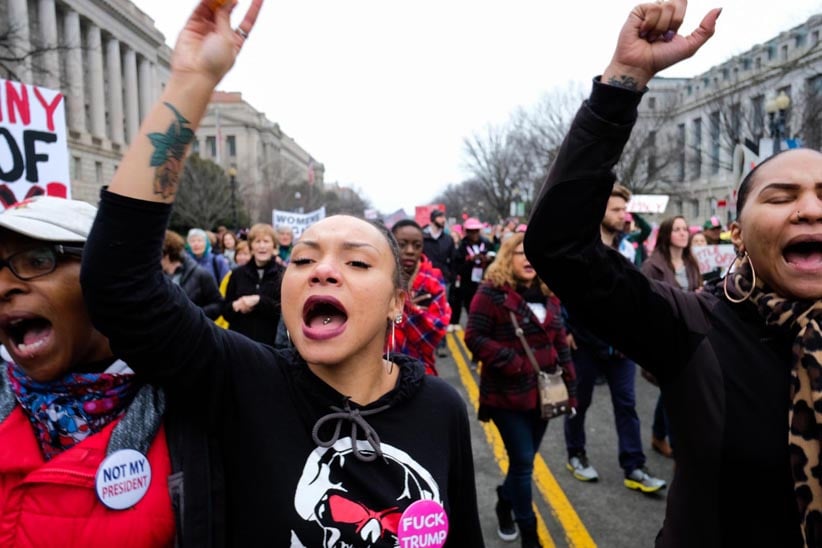 Q: We are living in such a heightened moment for gender, and sexual violence, topics you’ve long been photographing.

A: I spent 10 years of my life, about 60 per cent of my time living in shelters, riding with cops, living in prisons, meeting with women in the homes of the abusers when the women had gone back. So many of the women in my book [Living with the Enemy, 1991] allowed me to use their names. We still wouldn’t really understand domestic violence [without that], because we can’t understand it unless we can connect real people to real stories.

Q: Did that idea, of telling people’s real stories, drive you during the women’s march?

A: That’s always been in me, since the ‘70s. That’s why I have a camera. That’s why I’m not an art photographer. For me there’s nothing more powerful than real stories. Facts. Truth. And now I realize how important it is more than ever because of Trump. Because of all the people who will follow Trump no matter what. And they don’t care about the truth, they don’t like the truth, even. They don’t even know what the truth is anymore, they lie so much.

Q: Some of the women who participated in the women’s march seemed to view it as transformative, but I’m not really hearing that from you.

A: No, it wasn’t transformative, Rosie. We didn’t do what the women of Iceland did when they went on strike in 1975. After [the women’s march], everybody went back to reality. Women who care about their sisters, who care about making things better, they’re being kicked in the teeth every day by this president. Women in America have never been as vulnerable and exposed to becoming homeless, to seeing their children without any futures, it’s never been this bad. You understand? Not since we’re going back to 1963 [when women began fighting for greater equality].

What we saw throughout the year was that the women who voted for Trump, no matter what he did, no matter what he said—they didn’t care. I even have a friend in Ohio who I care about, who voted for Trump, and she was saying that the reason she still loves him is because he says the most outrageous things and he does the most outrageous things. There are too many women in this country who are privileged, who are educated, who are white, who support white supremacy. And we can’t gloss it over. We can’t hope that this is just going to go away someday soon. This is now! And this is going to affect us for the next four years, the next eight years, the next 40 years with what’s being done to the court system. Trump is appointing white conservative men to rewrite our laws. And all these Republicans are stealing from us, they are all highway robbers.

A: Okay, the tax reform [bill]? That’s just putting money into their pockets. They’re not giving us jobs. The people who voted for [Trump] are the ones that are going to get hurt most because they had these huge hopes and expectations for him. They were fools. They were big fools. But, honestly, it was a white man they wanted. It was a white man.

So we have nothing to be magically thinking about—the women’s march was the end. That was a great day, it was beautiful, but the glitter and the pink pussy cat ears and all of that, they’re in the dustbin of history now. Now it’s work. It’s warriors. I’m glad to see that women are really fighting back, because they sure weren’t all these years, they sure were not fighting for our reproductive rights. We sure have not been fighting for the ERA [Equal Rights Amendment] in this country, we sure have not been fighting for battered women to be able to get out of their abusive situations and find jobs and get any kind of loans and support so they can start all over. We haven’t seen men being held responsible and suffering consequences for being abusive or for being rapists. 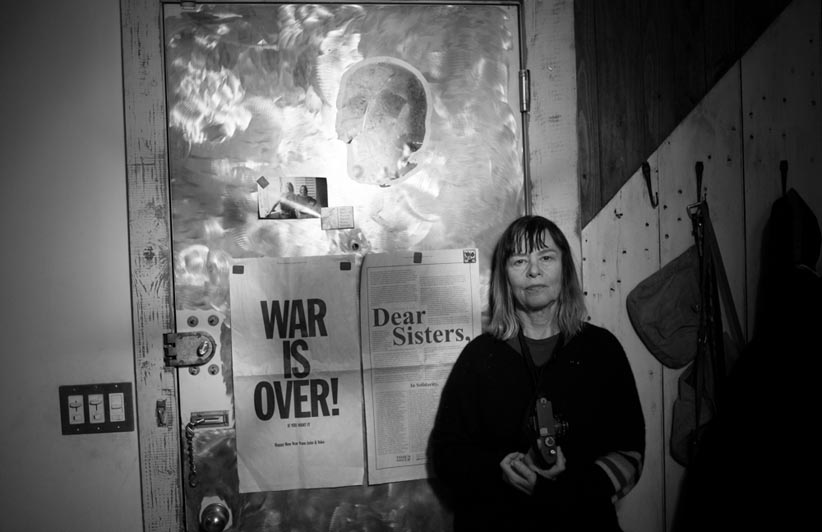 Q: Do you feel hope that the #MeToo movement will change that?

A: No, I don’t feel hope about the #MeToo movement. I have faith in women, and I have faith in men. I have faith in good people. But I don’t really like the #MeToo movement. I think it was a good beginning, to go after Harvey Weinstein was great, to go after Matt Lauer, etcetera.  But what they did to Al Franken? No. I’m pretty angry with the way the Democratic women just railroaded Al Franken. He was found guilty before he was even given a chance, before there was any interrogation or interview. He didn’t get a fair trial. I really want women to start standing up, strong, and if you don’t like the way some guy is harassing you, say it to his face. Be real. You know. Be strong. Women are so much stronger than men.

Q: So how does it feel to go through this time in America, on a day-to-day basis? What’s it like to get up, and have this deep anger and sense of—I don’t know what word you’d put for how you feel about the state of the U.S., but it’s not good.

A: Not, it’s not good. This is what fuels me—I am a fighter, Rosie. I’ve always been a fighter. When I was doing domestic violence work, my house was a shelter for women and children who would come here from all over the world, and my phone was a hotline for battered women who just needed to talk. For me, that’s what life is all about. It’s the fight, the struggle. It’s about keeping the faith, absolutely, but I will not be naive and I will not gloss things over, and if see things are wrong, I will call them out. And if I can I will photograph it, because I know without the pictures, most people will not believe anything I have to say.