Even in so-called ‘sanctuary cities’, many immigrant families now live in a state of fear 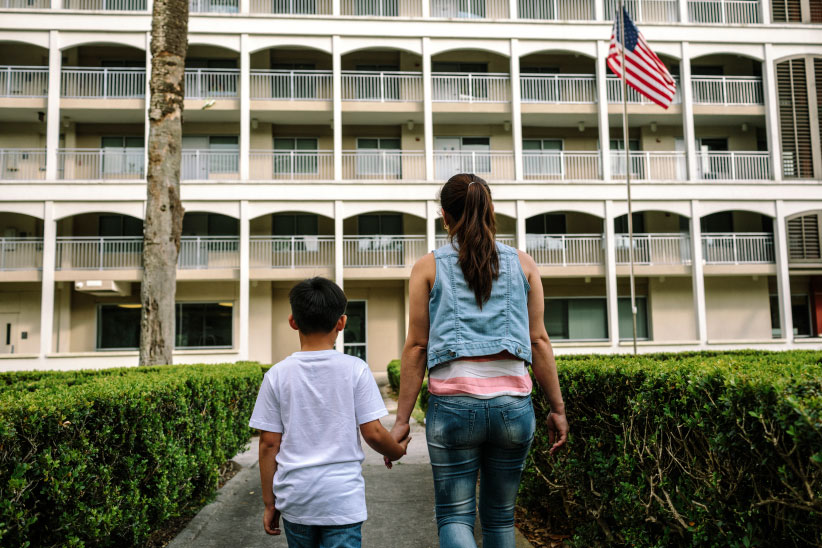 The knock came at 6.30 a.m. on the morning of Dec. 7. Five men in ordinary clothes waited outside the house in New Orleans. They’d opened the wooden front door, but a second, metal and plastic one remained shut and locked from the inside. Santos, answering the knock, knew better than to open it.

“You Santos?” one of the men asked. “I need you to come outside.” They needed to talk, he said. Santos had had a problem with his car—he’d been in an accident the night before, the man said. He repeated: “You need to come outside.”

“No,” Santos answered. He didn’t know what the man was talking about. He hadn’t gone to work that night. He hadn’t been in any car accident. Santos asked for identification, and one man held out the badge that undocumented immigrants across the U.S. dread: Immigration and Customs Enforcement, or ICE. All Santos needed to do was open his front door, and the officers could have arrested and deported him, splitting his family in two.

His two teenage daughters stood behind him, crying. His wife was in the bedroom, listening.

“If you want to speak to somebody, my lawyer call you,” Santos told them in improving, but imperfect, English.

“You want to play it like that?” one officer asked.

Santos said he wasn’t playing any game, but the officer was angry now, and he answered: “You started playing the day you crossed the border.”

Santos and his wife, Greyssy, both 39 and both from Honduras, are among the estimated 11 million undocumented immigrants living in the U.S. (Maclean’s agreed to use only first names for undocumented immigrants interviewed for this article.) Under the Donald Trump administration, increased deportations and mass sweeps in some U.S. states have set the population on edge, even in so-called “sanctuary cities” like New Orleans, which avoid helping enforce federal immigration laws.

New Orleans bars police from asking for people’s immigration status, and Mayor Mitch Landrieu has promised that officers “will not be coerced into joining Trump’s deportation army.” In late March, Attorney General Jeff Sessions threatened to withhold federal policing funds from New Orleans and other sanctuary cities, which he accused of putting “whole communities at risk.”

Immigration advocates are ﬁring back, arguing deportations could worsen budget shortfalls in states with large immigrant populations (by as much as $75 million in Louisiana’s case) and overwhelm an already backlogged justice system.

In recent months, the case load at the Stuart H. Smith Law Clinic and Center for Social Justice at Loyola University in New Orleans has soared. “Students used to have four or five cases per semester, and now it’s up to 15,” says Hiroko Kusuda, a professor at the clinic, which provides free legal services to undocumented immigrants. Professor Ramona Fernandez, who oversees cases of immigrant children, says calls to the clinic have tripled, if not quadrupled, “and I’m being conservative.”

“People are scared,” said Wendy, a 42-year-old mother of five who was born in El Salvador and has a U visa, an asylum status designated for victims of serious crime.

Six years ago, she was facing deportation, but “God sent an angel, Professor Hiroko,” she said, and now she’s applying for a green card. People at her church, her friends and neighbours are afraid every day, she said. “They cannot go out, they cannot drive, they cannot even go to bed.”

“Even the clients who have permanent residence status or citizenship are freaking out,” Kusuda said. “They believe they’re going to be deported.”

Despite Trump’s focus on Mexicans, many of the clinic’s clients come from Central American countries. Ana, a soft-voiced 28-year-old from Honduras, is seeking asylum through the clinic as a member of a particular social group facing violence in her home country—in her case, gang violence. “We knew things were going to change,” she said through a translator. “He’s a president who’s not shy about what he wants. He wants to break up our dreams.”

Ana dreams that her six-year-old son, Eddy, will grow up to be a doctor or lawyer. In February, the clinic helped him gain special immigrant juvenile status, which can lead to permanent residency, or green card status, and, ultimately, citizenship. Under the Obama administration, that designation often led to a last-resort reprieve from deportation for parents like Ana, called prosecutorial discretion.

The Trump administration’s immigration orders, however, have dramatically widened efforts to target and deport not just immigrants convicted of more serious crimes, but anyone in the country illegally—reversing Obama-era policies that largely left law-abiding undocumented immigrants alone. Under Trump, Kusuda said, “everybody’s a target.”

Ana’s partner, who is in the U.S. on a visa and has a young daughter who’s a U.S. citizen, is now afraid to go to his biannual check-in with ICE officials, in case they detain him. Worries about going to court are not uncommon now, even for routine events like setting a hearing date. In the past, undocumented immigrants could rest assured that ICE officers typically wouldn’t detain people at court. But that, like much of the immigration landscape in the U.S., is changing. ICE officers have been reported in Texas, Colorado and California courthouses in recent months, a practice the Trump administration has defended.

Organizations across New Orleans who help the undocumented community are now urging everyone fearing deportation to prepare power of attorney documents, laying out what would happen to their children if they were deported.

Like so many, Santos and Greyssy’s family is a mix of immigration statuses. Their two older daughters gained special immigrant juvenile status. They have two younger children, both born in the U.S. and thus U.S. citizens. But Santos and Greyssy have no pathway to legal status. And so they came to the Loyola University clinic to sign power of attorney papers on a recent, hot night in mid-March. “I don’t want my kids to go in different hands, to the state, or people we don’t know,” Santos said. “Before Trump, we were not scared. But now, everywhere we go, we’re scared.”

For a week after ICE officials came to their house in December, Santos and Greyssy did not go outside. There was a car parked nearby that seemed to be watching them. Ten days later, they moved to a new home.

Santos and Greyssy both came to New Orleans after Hurricane Katrina, part of the pivotal rebuilding efforts by undocumented immigrants. Santos built houses, and Greyssy cleaned them. He’s training to be a pastor at a church of about 200 people, 99 per cent of whom, he estimates, are undocumented. When ICE officials were spotted near the church last month, nobody showed up for prayers. But Santos still believes God will find a way to keep his family intact.

“I think it’s important to note that our president has grouped us all in one category; we’re all considered criminals, delinquent, but in every race there are all different types of people,” said Greyssy, speaking through a translator. “I don’t believe I’ve come to this country to do any harm. I’ve come to work.” She started to cry, then apologized.

These days, she often waits for Santos to get home before stepping outside: “That’s the first time I feel the breeze.”

Ana has decided it’s time to fight. She’s attended marches to protest ICE arrests. Her son is worried his family will be sent back to Honduras. “Hopefully Trump won’t deport us,” he told his mother.

“I have faith that something will come through,” Ana said about her asylum case. But the truth is, the odds are increasingly against her.