Despite Donald Trump, Canadians are still flocking to America 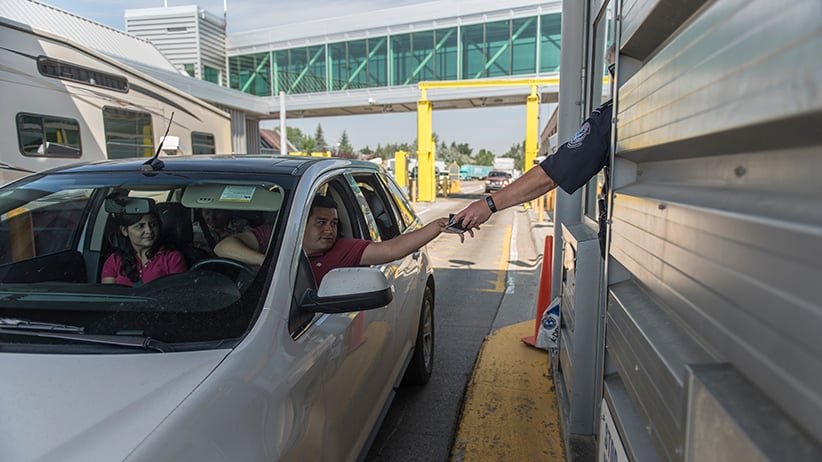 Trucks and cars enter the U.S. from Canada at the Customs and Border Protection Sweetgrass border crossing on Interstate 15. (William Campbell-Corbis/Getty Images)

When President Donald Trump enacted his unilateral, nasty, morally-dubious travel ban targeting Muslim-majority countries, the Internet’s collective, well-meaning, morally sound response was to turn the tables on Trump and the country that elected him president. Many Canadian academics and tourists-to-be decided that banning their own cross-border travel was, for several reasons, the right thing to do. Others urged the masses to pile on and punish those dangerous Americans for their sins.

At the time, ambitious boycotters rejected any suggestion that a principled, grassroots crusade would fail. “What an absolute load of twaddle,” replied one reader on Facebook to a Maclean’s post that said as much. “All these individual decisions by people are collectively adding up to quite a projected hit to tourism to the United States.”

Others—the vast majority of commenters—didn’t give a hoot about any collective effort, but were simply turned off by an unwelcoming country amped up on hostility to outsiders. Trump was simply the last straw. “Last year going through Nashville my kids were scared due to all the yelling at bewildered travellers going through security,” wrote another reader. “I have no interest in seeing how much worse it is with the orange abomination in charge. Due to family I mostly travel to red states and I’m quite simply tired of being made to felt unwelcome.”

A common conclusion: “There are many other places I can visit instead.”

But did Canadians actually pick the rest of the world over the United States? Was the collective rallying cry to say no and stay home successful? And did those principled Canadians who snubbed vacations in America outnumber those who still travelled south?

Google tells us part of the answer. Recall that searches for “Trump boycott” spiked after the president’s first announcement of a travel ban aimed at six Muslim-majority countries. Watch those searches dwindle as Trump settled into his new role.

Another snippet of Google analysis tells more of the story. Canadians may have stopped asking about a Trump boycott, but they never stopped googling “exchange rate.”

In the grand tradition of Canadian frugality, we plan our travel relative to the strength of the loonie. When our dollar is stronger, border lines grow. When it’s weaker, Buffalo’s outlet malls have empty parking lots. Measure the number of Canadians who drive across the border against the number of Americans who return the favour, and the trend is clear—almost without any lag at all between the loonie’s fortunes and our itineraries. 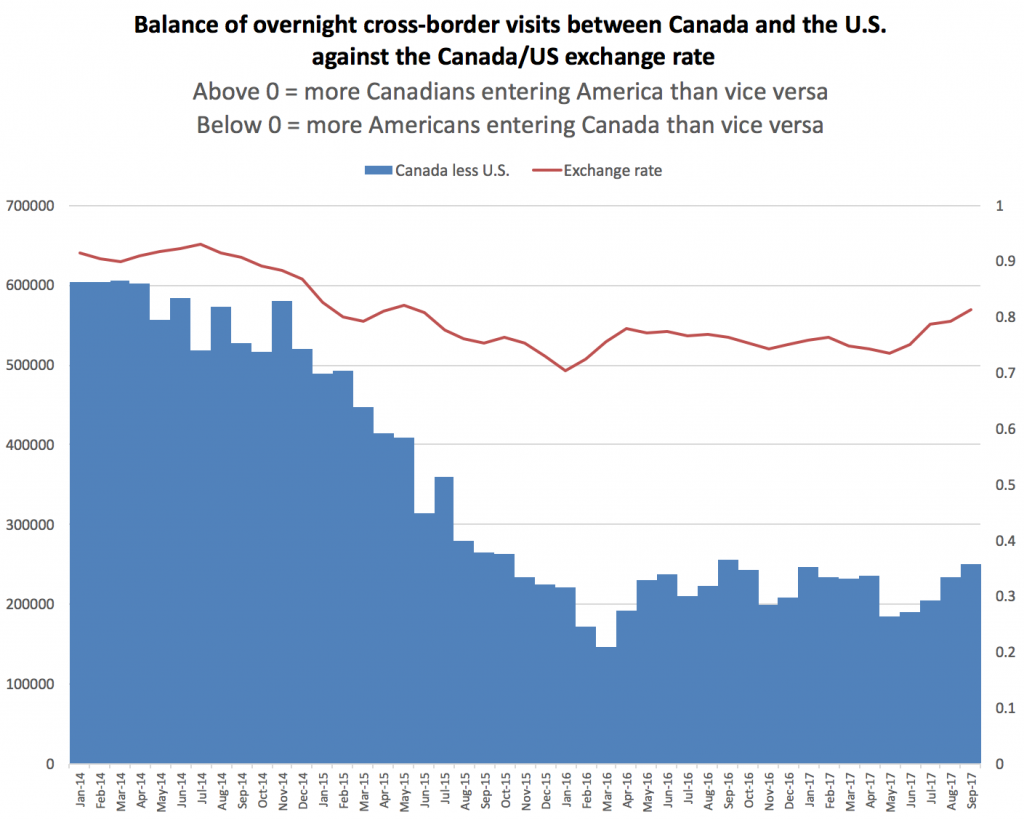 Incredibly, U.S. data, backed up by Statistics Canada, reveals that Canadian tourists are actually bucking a global trend in the Trump era. Canadian business trips to the U.S. have declined, but visits for pleasure are up markedly. In January, total travel to the U.S. from overseas dropped 2.3 per cent from the same time in 2016. But Canadian tourist trips ticked up 7.4 per cent. The next month, overseas trips were down more than 10 per cent, and Mexicans reduced their own travel by eight per cent. As for Canadian vacationers? Our year-over-year number increased 7.04 per cent. March was the same story. In May, when the loonie sagged to its lowest point of the year, tourist trips dropped. But that number rebounded in the months that followed. By September, the latest month for which data are available, Canadian tourists had amassed more than 15 million trips in 2017—4.8 per cent above 2016 levels. (Total trips, including business, had increased by 1.9 per cent.) 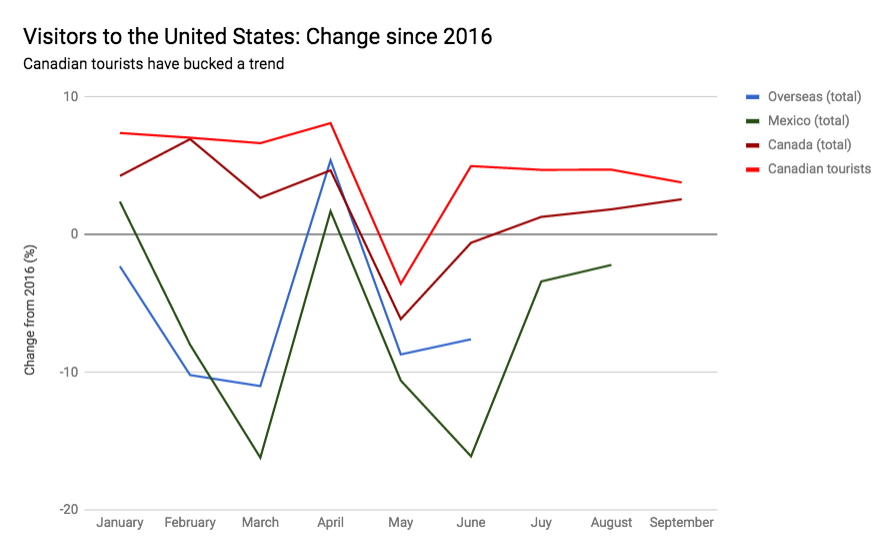 Among a select group of countries with high volumes of travel to the U.S., only a few have joined Canada on the positive side of the ledger. June 2017 data shows that South Korean trips to the U.S. have spiked this year, while Italy, Ireland, and Spain’s numbers are higher than Canada’s. But trips from the U.K., China, India, Switzerland, and a clutch of South American countries are down significantly. 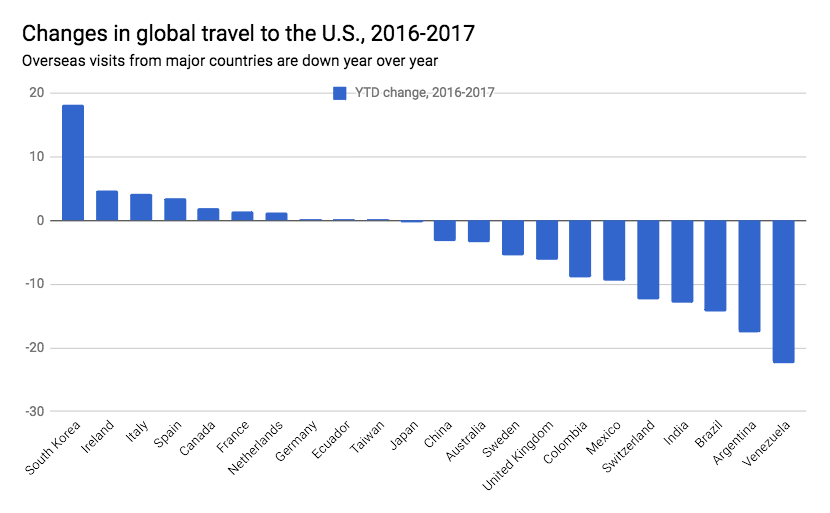 SOURCE: U.S. Department of Commerce, ITA, National Travel and Tourism Office from the Summary of International Travel to the U.S. (I-94) report

If Canadians want to punish America by joining the rest of the world and withholding tourist dollars, the best thing they can do may be fight for an end to the North American Free Trade Agreement. The demise of that deal, and the economic uncertainty unleashed in its aftermath, would likely hit the loonie hard. And that’s the easiest way to get a Canadian tourist to go see Banff instead of Yellowstone—or their local Walmart instead of that mall they can see on the other side of the Niagara River.