Fixing the world, from a hotel in Halifax 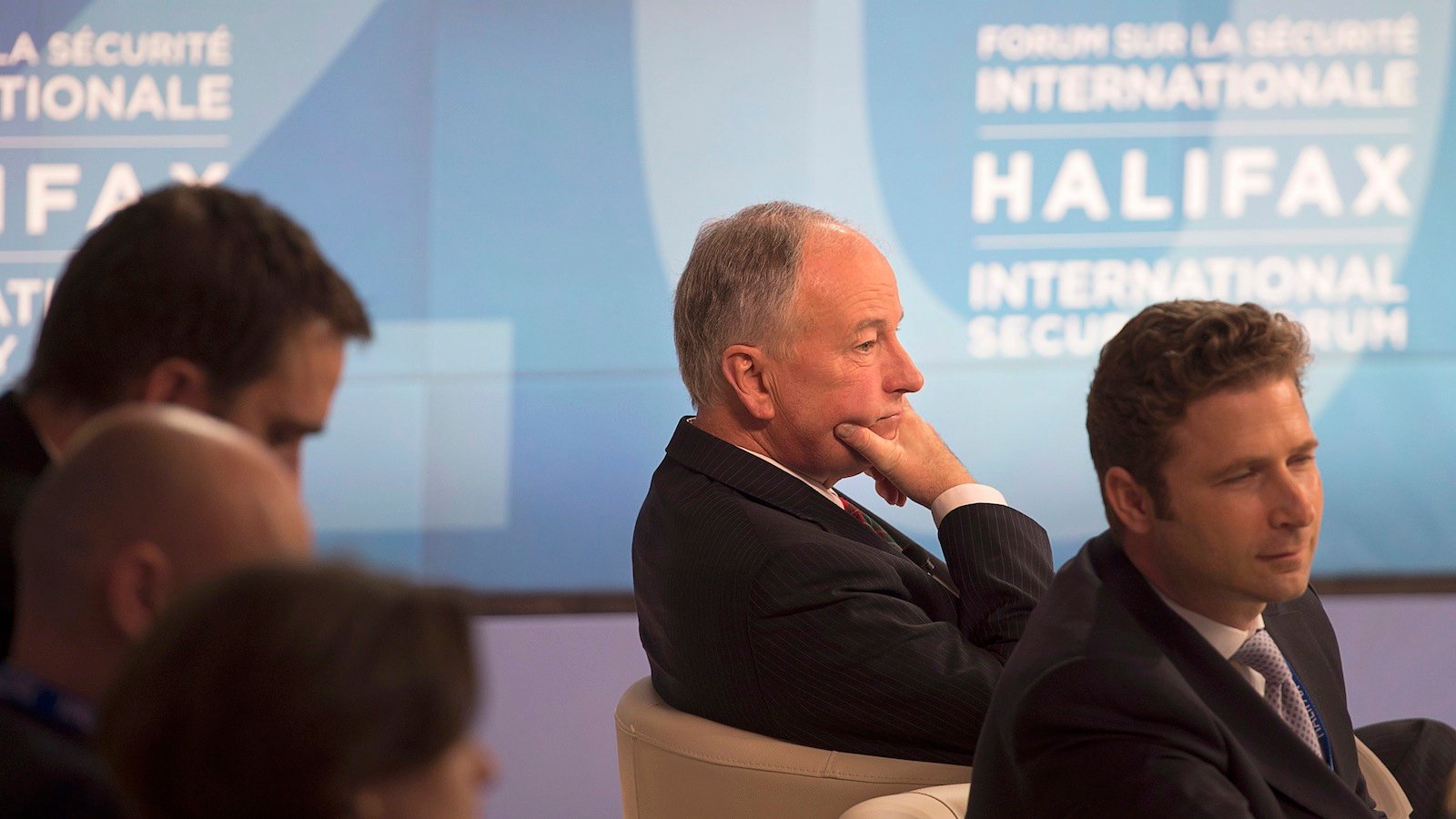 To Halifax, then, where defence and foreign-policy experts from around the world converged on the second floor of the Westin Nova Scotian for the sixth Halifax International Security Forum. John McCain was there, leading a large U.S. congressional delegation. So was Toomas Ilves, the Estonian president, bow-tied and erudite. Ehud Barak, the former Israeli prime minister. Abdullah Gül, the former Turkish president. Four ministers in the Harper government were on hand — On Baird! On Nicholson! On Blaney and MacKay! — along with their chiefs of staff, deputy ministers, and short trains of less-exalted staffers and officials. Diplomats and generals, pundits and academics and think-tankers filled out the rest of the attendee list. They had from Friday morning to Sunday afternoon to fix the planet. They gave it the college try. They’ll be back next year.

Between sessions, the delegates poured from the plenary room and the breakout panels into corridors where they scarfed from groaning boards of refreshments — falafel, puff pastries, s’mores perched on teaspoons, tiny woven baskets stuffed with crudités. Smoothies or Perrier to wash it down. Most of the food went untouched. By the end of the next session, all of it had been replaced with something even more fabulous. Jars of candied nuts. Lobster macaroni. Most of that went uneaten too. Such bounty is “the only way to get the Americans to come,” one of the Canadians shrugged. Visitors from Ottawa, where you can’t expense coffee, wept.

Getting the Americans to come is a key strategic objective of the Halifax Security Forum. “Halifax,” the shindig’s mission statement reads, “brings together informed leaders to consider international security threats in a unique setting that leads to building democracy, creating opportunity and promoting peace.” The most informed leaders, or at least the ones with the serious throw weight, are Americans. Halifax works, to the extent it does, because it’s a pleasant weekend retreat from Washington. Since the Americans are there, the Europeans come. Add Barak from Israel and M.J. Akbar from India and Saad Mohseni from Kabul, and pretty soon you’ve got a party.

This year there was much to discuss, as there usually is when the topic is trouble. Half of Ukraine’s tanks have been destroyed in the country’s eastern precincts. By whom? Russia, obviously, though Russia denies it. There was much talk about “hybrid warfare,” and a little about the “Gerasimov doctrine,” after an article written in the Military-Industrial Courier in early 2013 by the Russian chief of the general staff, Valery Gerasimov. The two terms refer to the same thing: messes of the sort the Russians have confected in Ukraine. “Wars are no longer declared,” Gerasimov wrote, in what reads in hindsight as a preview of coming attractions. “A perfectly thriving state can, in a matter of months and even days, be transformed into an arena of fierce armed conflict, become a victim of foreign intervention, and sink into a web of chaos, humanitarian catastrophe and civil war.”

A few thousand kilometres south, Western fighter jets, including Canadian CF-18s, are attacking Islamic State targets in Iraq. They’ve rocked the group back on its heels, but “we’re not even close to beginning to win,” one soldier told me. The Commons voted in October to authorize a six-month RCAF deployment. When those six months run out in March, there is no chance the fight will be done. It’s up to MPs, or at least the Conservative majority, to decide what happens next.

In three days, 300 people can touch on a lot of subjects. A deadline for negotiations over Iran’s nuclear program was looming; attendees were divided on how the talks would fall apart, as few doubted they would fail. A U.S. Navy admiral said she hopes to field an aircraft-carrier battle group that runs on biofuels by 2016. A Canadian energy analyst called that a dumb idea: it will lay waste to cropland somewhere else to make the biofuels. There was much handwringing over the presence of Islamists and other propagandists on Twitter; Mohseni, the Afghan media mogul, said most government attempts to fight back on social media simply make the problems worse.

Two conversations with Vladimir Putin were cited endlessly. In Brisbane a week earlier, Stephen Harper told the Russian leader: “I guess I’ll shake your hand, but I only have one thing to say to you: You need to get out of Ukraine.” Rousing stuff. Canadians among the Halifax attendees received many congratulations for having such a staunch leader. But Angela Merkel was in Brisbane too, and she talked with Putin for six hours, most of it alone. Does that make Merkel a soft touch? Try telling her that to her face.

After the Brisbane marathon, Merkel said nothing for a day, then delivered a lecture in Sydney that sounds like an update of Churchill’s Iron Curtain speech. Putin’s way “will not prevail,” she said, “even though the road may be long, even though it may be arduous and bring with it many setbacks.”

Neither Islamic State nor Ukraine appeared in the agenda for the previous Halifax Forum, only a year ago. Both will surely be on the agenda next year and beyond. Much about the weekend’s discussions left the impression that something big has snapped, and that two crises that were fast to rise will take a generation to fix.