Jeremy Corbyn's defeat is a win for the democratic world

Terry Glavin: Britain will not be yanked out of the western alliance. Its leader will not be a man who has counted holocaust deniers among his friends. It's a victory of sorts. 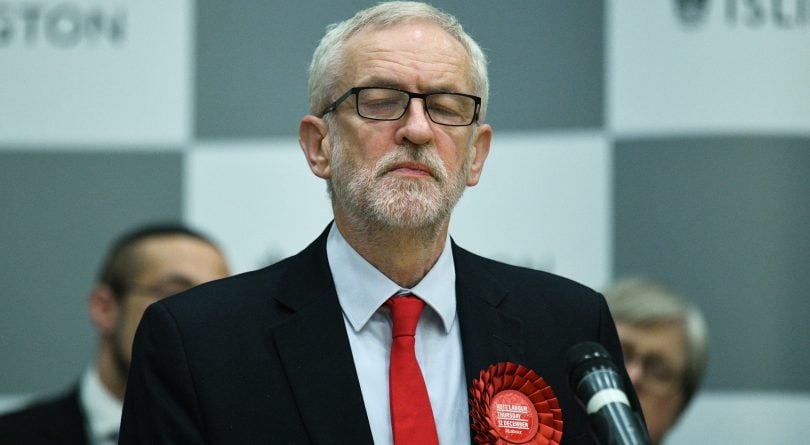 Corbyn pauses while speaking in his Islington North constituency on election day in the U.K. (Leon Neal/Getty)

One would have hoped that the United Kingdom’s just-concluded national elections would reveal at least the glimmer of some silver lining in the menacing black cloud that has been darkening English skies these past four years. No such luck.

The crushing and richly-deserved defeat of Labour leader Jeremy Corbyn, who has led the once proud and gallant party of the British working class to its worst humiliation since 1935, should have been sufficient to put a spring in the step of any decent social democrat. It could have been the moment when Labour began to free itself of the Corbynite millstone that has been hanging from its neck since September, 2015.

But even that was not to be. In conceding defeat Friday morning, Corbyn made clear in his remarks to a gathering of reporters that the Labour Party will not be quickly shut of him. “I was elected to lead the party and I think the responsible thing to do is not to walk away.”

RELATED: Boris Johnson and the peculiar British art of believing in nothing

Instead, the spindly, grey-bearded vegetarian allotment gardener declared his intention to hang on for the next few months, and instead of resigning along with him in disgrace and contrition, his loyalists on Labour’s executive board will perform the post-election autopsy and sort out the timetables involved in selecting a successor. “What I hope is that we have a period where there will be a discussion within the party,” Corbyn said. “It will be in the early part of next year sometime.”

In the Conservative camp, the mood around the buffoonish Boris Johnson was euphoric. The Tories have come out the other side of Britain’s most absurd election campaign in a generation with 364 elected MPs. With only one riding count left to declare Friday morning, that’s a walloping 78-seat majority over the combined strength of Labour, the Scottish National Party, the Liberal Democrats and the other minor parties. Not since the days of Margaret Thatcher in the 1980s have the Conservatives had it so good.

Thursday’s election hands Johnson an unambiguously solid mandate to proceed with his intention to make good on the razor-thin July 2016 “Brexit” referendum and pull Britain out of the European Union. The United Kingdom will be gone from the EU on Jan. 31, when new talks to determine Britain’s trade realignments with Europe begin, and the economic and political chaos of the past three years begins a new chapter.

RELATED: Dazed and confused, it’s Britain in the age of Brexit

The anti-Brexit majority in Northern Ireland’s six counties will be obliged to sort out a complicated regime of customs checks with the 26-county Irish republic, an EU member state, as well as with the British mainland across the Irish Sea. And then there’s the anti-Brexit Scottish National Party, which drove Labour almost entirely out of Scotland in 2015. The SNP took 48 of Scotland’s 59 seats in Thursday’s vote. SNP Leader Nicola Sturgeon is now demanding a Scottish independence vote aimed at ending Scotland’s three-century union with England in a referendum Johnson implausibly claims he is entitled to disallow.

As daunting as these prospects will seem, it is the Labour Party’s immediate relevance to the course of British history that is now most at stake. Jeremy Corbyn’s leadership cost Labour 59 seats across the party’s mining and industrial motherlands on Thursday, and there is little indication that the neo-Stalinist core of the Corbynite project is in the mood for any serious reflection.

So, while there is nothing like a silver lining that can be discerned in what has happened in the United Kingdom this week, there is still a glimmer of hope in what did not happen. Jeremy Corbyn’s Labour Party did not win the election. The United Kingdom will not be jolted out of the western alliance. The prime minister of Britain will not be a man who has counted holocaust deniers, 911 conspiracy theorists, Hamas and Hezbollah leaders and unreconstructed Jew haters among his friends.

Vladimir Putin’s Russia will not be able to count on another NATO leader as acquiescent and accommodating of Kremlin subversion and aggression as U.S. President Donald Trump. A tawdry teetotaller in a Lenin hat who was happy to take the equivalent of $27,000 for his services to the Khomeinist propaganda channel Press TV—before the network was banned in the U.K. for broadcasting the forced confession of a tortured journalist—will not be taking up residence at Number 10 Downing Street.

RELATED: What you need to know about Jeremy Corbyn

The Corbynites remain for the moment in control of the Labour Party leadership, but at least Corbyn will soon be surrendering the party helm, and the legions of cranks and antisemites that have flocked to the Labour Party in his tailwinds, will be without a preeminently powerful figurehead in Labour.

Two weeks ago, the U.K.’s Campaign Against Antisemitism released the annual results of its surveys, revealing that left-wing antisemitism has overtaken right-wing antisemitism in Britain, and that Corbyn had become the favoured politician among Britain’s anti-Jewish racists. Two thirds of Corbyn’s vanguard were found to have expressed antisemitic views. More than 80 percent of British Jews identified Corbyn as a specific threat to the Jewish community.

Thursday’s election result means that Jeremy Corbyn will not be the prime minister of Britain.

Not much to be cheerful about, but at least there’s that.