The country's seething political tensions took over the streets of Westerville, Ohio, while, onstage, the candidates struggled for words to address them 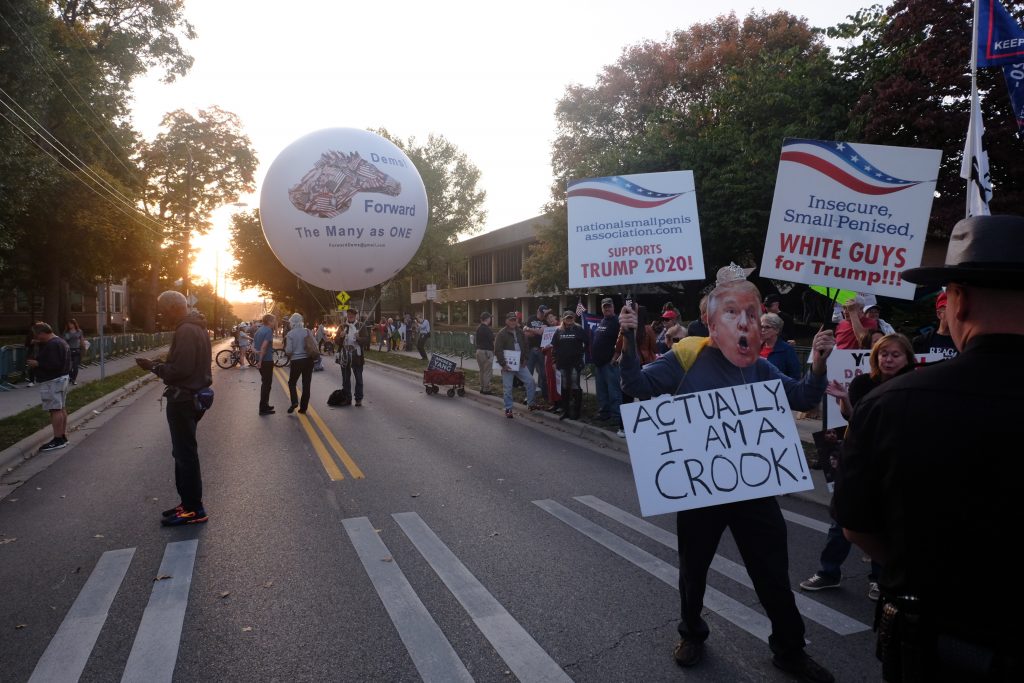 Stephen Parlato, in the distance, holds up his balloon on West Main Street in Westerville, Ohio. (Michael Fraiman photo)

A few feet from the madness, nine police officers sat quietly on horseback, watching over the chaos. Cycling past, a female student turned to laugh at the horses and tell her friend, “Can you imagine how much horsesh– there’s gonna be tonight?”

The answer: a lot. Just a couple blocks away, on the campus of Otterbein University, 12 Democratic candidates for president gathered on a stage to partake in an exhausting three-hour debate hosted by CNN and the New York Times. Supporters and protesters travelled literally from across the country to be there not even with a ticket in hand, but just to feel a part of something big.

RELATED: Elizabeth Warren, once at the back of the pack, is rallying like a contender

“I am truly concerned about the selection and what a pivotal election this is for the country,” said Stephen Parlato, who flew here with his wife from Boulder, Colo., to fly a fragile 10-foot-tall helium balloon he strapped into his jacket with electrical wires and rope. (He gently folded his contraption into a cloth bag that he secured with custom-cut foam core panels for the flight, but even then, airport security confiscated the 12-volt battery he needed to light the thing up after dark. He bought a replacement in Ohio.)

At 65, Parlato has retired from his career as a mental health counsellor and transitioned into the life of a full-time artist. On his balloon is emblazoned his latest creation: a speeding horse composed of American flags and the self-explanatory slogan, “Dems! Forward, the many as one.” Because the Democrats’ traditional donkey logo was born from Andrew Jackson being called a jackass by his opponents, Parlato felt it time to introduce a more positive symbol. “People relate to the image, understand almost immediately that it’s a more invigorating one,” he says. “That’s all I have to offer, really. It’s anybody’s who wants it.”

A little cohesion would be welcome in Westerville. On the debate stage, the 12 candidates (two more than appeared in last month’s debate) fought for speaking time while glossing over familiar topics, such as gun control and foreign policy. Depending on who you ask, the night was a boon for frontrunner Senator Elizabeth Warren, who (mostly) deflected criticisms about her purported plans for everything, and South Bend, Ind. Mayor Pete Buttigieg, whose impassioned statements about the value and integrity of America’s military should resonate with moderates. There were newsier themes, like Senator Bernie Sanders’s recent heart attack (handled deftly in a sincere thank you to everyone who supported him), former vice-president Joe Biden’s Ukrainian connections (handled awfully, with vague non-answers) and the looming threat of job-killing automation.

RELATED: Don’t count out Andrew Yang, the populist technocrat who wants to be president

That last one—a signature talking point for entrepreneur Andrew Yang, and the first time his issue has been raised on the national stage—felt especially raw for Ohioans. The politicians pontificated onstage nearly one full month to the day after General Motors employees began striking nationwide, costing the company more than $1 billion and plenty of bad press, spurred in part by GM’s decision to sell its newly closed plant in Lordstown, about three hours northeast of Westerville.

Specific questions about handling the strike, as well as GM’s decision to move plants to Mexico, made for some of the night’s iffier answers, especially from the optimistic but low-polling Senator Cory Booker. Strengthening unions? Raising the minimum wage? It’s difficult to incentivize a corporation to move back home when you’re touting socialist policies, popular though they may be at home.

It marks the kind of hurdle these politicians will have to overcome if they want to win in Ohio, which is often dubbed a swing state, but in reality flocked to Trump in 2016. Ohioan Democrats are optimistic when they say things are starting to change. Nancy Larson, a candidate for the Ohio House of Representatives who came down to Westerville to protest with an anti-corruption poster in hand, believes local farmers are being crushed by climate change on one side and Trump’s tariffs on the other. “Thirty-five per cent of farmland in my district was not able to be planted because we had five days of rain out of every seven for over a month,” she says. “There needs to be people turning out to say that’s not acceptable.” 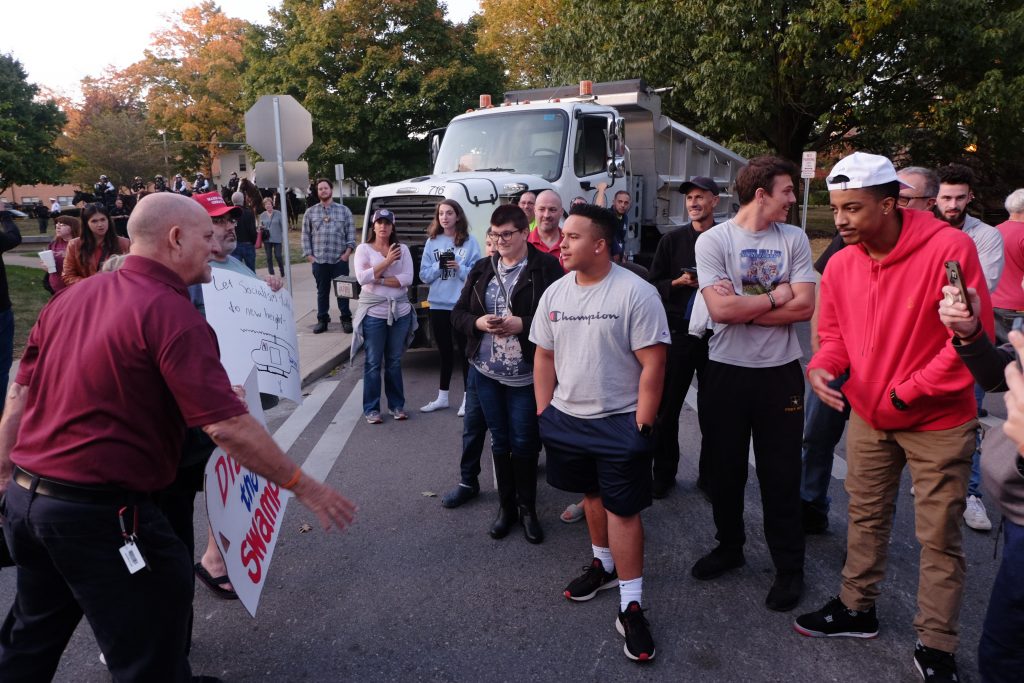 Christian Cooper, at right in the red sweatshirt, stares down Donald Trump supporters with his friends. (Michael Fraiman photo)

Larson stood within one of the biggest, most indecipherable crowds of the night, amassed at the corner of West Main and North State streets at the cusp of Westerville’s crisp, old-fashioned downtown. The hundreds of fans waved a hodgepodge of slogans—Make America Great Again, Win With Warren, Yang 2020, Boot Edge Edge, Feel the Bern—spiced with more blown-up posters of fetuses from the anti-abortion crowd, generic cries to keep money out of politics and at least one sign that says, simply, “Tulsi,” which, proportionally speaking, was a fairly accurate representation of Congresswoman Tulsi Gabbard’s support.

Larger groups staked out corners exclusively for themselves, at least for some time, but inevitably the crowds intermingled such that Trump supporters were shoulder-to-shoulder with Warren’s fans and Buttigieg’s team awkwardly shared their corner with the pro-lifers.

Then again, isn’t that what the night was all about? A healthy exchange of ideas? A passerby could see it everywhere. On the first floor of The Old Bag of Nails pub, a 30-something bearded white guy sat alone by the bar in his Yang 2020 T-shirt, then turned to challenge two women in MAGA toques over the differences between gun and knife violence. Down the street, lingering by a parking lot, a student blasted her companion’s explanation of trickle-down economics. And back near the police horses, a 20-year-old black student named Christian Cooper got into a heated argument with a grizzled Trump supporter (whose cardboard sign featured a stick-figure drawing of a man falling out of a helicopter and the caption, “Let socialism take you to new heights”) over the allegations that their president is a sexual assailant.

“I do criminal defence work,” the Trump supporter shouted. “If we went off whatever people said—”

“But people should be held accountable for their actions—”

After the Trump crowd thinned out, Cooper laughed about the argument with his friends. They live on campus, just a few blocks away. How does he feel about this invasion in his own backyard?

“I think it’s pretty dope,” Cooper said with a grin. “Even if that guy was saying ‘n—er’ or stuff I didn’t agree with, it’s like, he has his opinions, as do I. That’s what makes us all American. I think it’s great for a small town like Westerville to have an event like this and bring awareness to make people more woke to what’s all going on.”

He mocked his friend, who froze up when the Trump supporter targeted him.

“I can take that,” Cooper boasted. “I guess it’s all a part of us being Americans.”