What’s cooking in the U.K.? Politics.

For the U.K. Labour and Tory party leaders, the family kitchen is an unfriendly campaign-trail stopping point 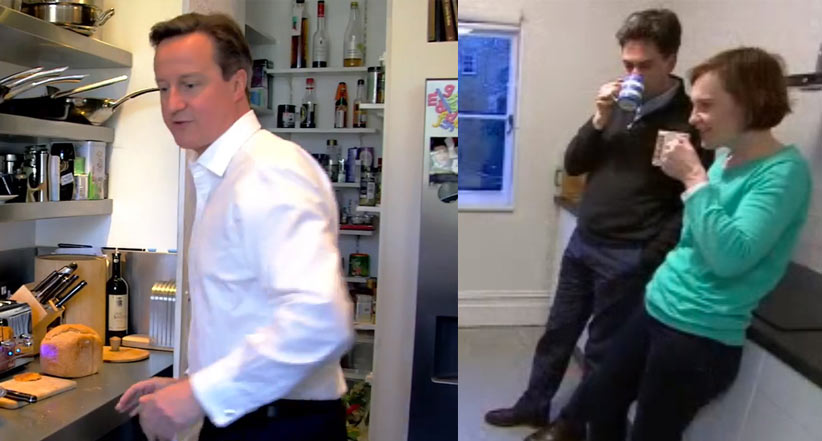 Last month, when Labour Leader Ed Miliband and his wife Justine were interviewed on BBC television in their tiny, modest kitchen, the great nation of Britain found itself once again divided, this time along lines of class and home decor.

On one hand, there were those who mocked the Milibands’ lack of taste and dowdiness. Sarah Vine, who happens to be married to Michael Gove, the Tory chief whip, used her column in the Daily Mail to sneer at the kitchen’s “bland, functional and humourless” design and went on to compare it to Soviet-era workers’ housing—a reference to Miliband’s intellectual Marxist upbringing. “Very rarely do I feel sorry for Ed Miliband,” she wrote, “but seeing him standing there in his forlorn little kitchen, staring into the middle distance while sipping from a stripey blue-and-white mug, part of me wanted to rush home from work, sling some jolly painted crockery in a bag and head over there with a tin of homemade brownies.”

Others (mostly Labour supporters) defended the kitchen’s defiant, standing-room-only austerity. Admittedly, the acid-green Ikea bin was hideous, but who cared? It was functional and, more importantly, very real. How authentic of Ed Miliband not to have fallen prey to the fetish for high-end kitchen design that’s afflicted the rest of the professional classes of north London, where he lives with his family in a $3.74-million Georgian townhouse. Only a man truly in touch with the concerns of common working folk would dare to have such an ugly kitchen, surely?

That would have been the end of it, except one of the Milibands’ professional-class north London friends­—Times columnist Jenni Russell, whose daughter is the couple’s godchild—took to Twitter to defend her pals and ended up causing them a sinkful of trouble. “Ed Miliband’s kitchen is lovely,” she tweeted indignantly to Sarah Vine, clarifying that the room on the BBC was actually not the family’s main eating area but “a functional kitchenette by sitting room for tea and quick snacks.”

Before you could say “marble countertop,” the right-wing press had dubbed the Labour leader “two kitchens Miliband” and were comparing him gleefully to the duke and duchess of Cambridge, who were famously mocked for having a second kitchen installed in their family-size apartment in Kensington Palace a couple of years ago. In the Cambridges’ case, one kitchen was said to be a “show kitchen” for entertaining and casual dining, while the other was for servants to actually prepare food in (à la Downton Abbey). Presumably in an effort to convey he was far less grand than royalty, Miliband took pains to point out that his second kitchen was in fact used mainly by the family’s live-in nanny, which of course only caused more howling. Two kitchens! And one for his servant!

Just a few days later, David Cameron bravely allowed the Sun to interview him while preparing a sardine sandwich for lunch in the kitchen of his Downing Street residence. The photos were instantly disseminated across the Internet and helpfully annotated by the British media with labels explaining the significance of every single item in the Cameron fridge, cupboard and pantry. It’s impossible to know how staged the kitchen glimpse might have been or what insights it can offer into Cameron’s leadership style, but a quick scan of his larder seems to suggest just the sort of down-to-earth sophistication Cameron would like to project. From his high-end vegetable spiralizer (good for making zucchini pasta for his low-carb diet) to a $60 shiraz, to food items like Marmite, za’atar seasoning, Heinz ketchup, artisanal bread, maple syrup, raw honey and PG Tips tea, Cameron’s pantry exuded a carefully crafted blend of the aspirational and the deeply familiar—just like a good politician on the campaign trail should do.

When the two leaders faced each other in parliament for the weekly Prime Minister’s questions, the kitchen jokes kept coming. Cameron, who can never resist a bit of smug ribbing at someone else’s expense, came in with the opening groaner. While talking about changes to the NHS, he joked that shadow chancellor Ed Balls “wants to be in the kitchen cabinet, he just doesn’t know which kitchen to turn up to.”

To which Miliband tartly responded, “I thought he might mention kitchens. At least I paid for my kitchen, unlike the government chief whip.” This mention of Michael Gove and Sarah Vine’s kitchen, which was renovated at the taxpayers’ expense—expenses that were later paid back during the British MPs’ expenses scandal back in 2009—brought the tale of two kitchens full circle.

With Miliband’s tepid performance in the recent leaders’ debate and Cameron pulling ahead in the polls leading up to the May 7 election, the pressure is on Labour to turn up the heat and leave this pile of dirty dishes behind them. As one party insider recently told the press, “We’re desperate to get out of the kitchen.”