The U.K. could use a 'bloody difficult woman' like Theresa May

May is moderate, hard to predict, demands loyalty—and might be British PM until 2020 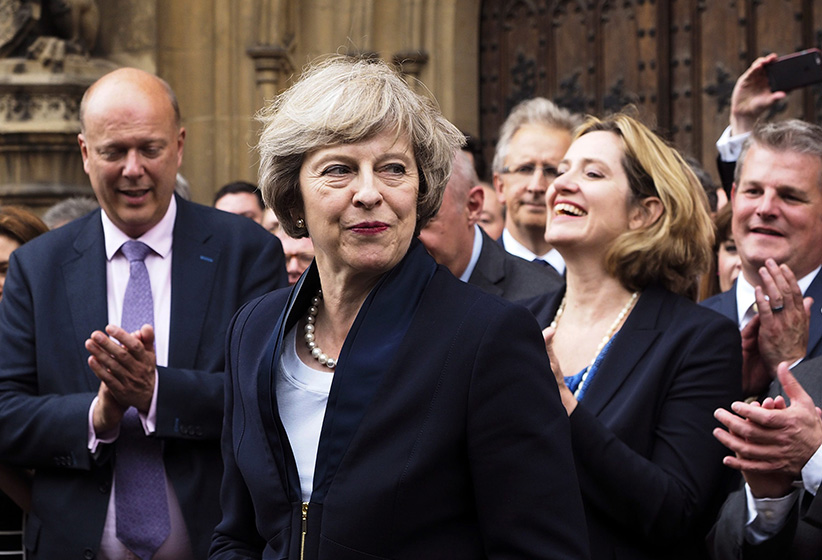 Britain’s Theresa May is applauded by Conservative Party members of parliament outside the Houses of Parliament in London, Monday July 11, 2016. Britain’s Conservative Party has confirmed that Theresa May has been elected party leader “with immediate effect” and will become the country’s next prime minister. Prime Minister David Cameron has said he will step down on Wednesday July 13, 2016 and May will immediately replace him. (Max Nash/AP)

These were the words, spoken by veteran Tory MP Ken Clarke, that best sum up the steely image of Theresa May as she is sworn in this week as Britain’s second female prime minister.

Do not mistake them for a putdown: They were spoken with admiration, and have been hailed by most of the British press as well as Twitter as the ultimate political compliment. Even May herself embraced the title. “Politics could do with some more bloody difficult women actually,” she said in an interview with the Telegraph newspaper last week. “I think that if you believe in something strongly you should go for it and if that makes me difficult…” And the paper’s editorial page concurred, making the inevitable comparison between May and her only same-sex predecessor, Margaret Thatcher: “We have had one running the country before; we need another now.”

Unlike her affable, privileged predecessor David Cameron — a leader well-known for his love of country weekends and “chillaxing” — May has a reputation for austere resolve and little time for small talk. The daughter of a small-town vicar in Oxfordshire, May went to grammar school before attending Oxford University, receiving a degree in geography. From there she went on to work at the Bank of England before entering politics as a local councillor. Classmates remember her as fashionable, studious and deeply ambitious. “I cannot remember a time when she did not have political ambitions,” her university friend Pat Frankland told the BBC in 2011. “I well remember, at the time, that she did want to become the first woman prime minister and she was quite irritated when Margaret Thatcher got there first.”

First elected as an MP in 1997 – a dark time for the Conservatives as the Blair era was dawning – May has managed to hold on to her safe seat in Maidenhead since then. Under Cameron she has proved herself as the longest serving Home Secretary in a century. At 59, she is also the most senior female cabinet minister in the Tory cabinet.

As Home Secretary, May developed a reputation for being meticulous and controlling, occasionally engaging in turf wars with other ministers who dared to cross her.

In 2014 she managed to successfully deport the extremist Muslim cleric Abu Qatada after a lengthy court battle.

Her politics are moderate, though not always easy to predict. She has been deeply critical of the police on the issue of corruption, and supported same-sex marriage when many in her party did not. A self-described feminist, she nonetheless expressed the personal view that legal limits on abortion should be curtailed in Britain from 24 weeks to 20 weeks.

More than anything, however, it is her reputation as a lone wolf that defines her. She has never been part of Cameron’s “Notting Hill set” of privately educated Oxford Union cronies (although her own husband, Philip May, was president of the prestigious organization in the ’70s). At a time when the British political and economic landscape resembles a dining room trashed by the notorious Bullingdon Club, May’s reputation for being deadly serious and “unclubbable” can do her no harm.

“My whole philosophy is about doing not talking,” she told the Telegraph last week. “I’ve always championed women in politics. We just get stuck in. Politics isn’t a game, the decisions we make affect people’s lives and that is something we must all keep to the forefront of our minds.”

Described by colleagues as an even hand, she is said to be fiercely immovable and the opposite of impulsive, a micromanager who demands unswerving loyalty from her employees. Never one to make important decisions on a whim, May must be just as astonished as the British public to have learned she would achieve her life’s dream of becoming prime minister within just a couple of weeks of announcing her campaign for party leadership.

But as we have seen in recent weeks in British politics, ambition and careful plotting only count for so much. The wildly unexpected chain of events that led to May’s virtual coronation on July 13, was in the end, as much happenstance as calculation.

Key to May’s appeal was her cautious (and some would say politically expedient) position as a moderate in the Brexit debate. Although she quietly campaigned for the side of Remain in the EU referendum alongside her boss David Cameron, May is understood to be a RINO (Remain In Name Only) in her personal convictions. She has already said there will be no second referendum or unduly prolonged negotiation with the EU. Instead, she will create a special “Brexit unit,” likely headed by a by a prominent member of the Leave campaign. “Brexit means Brexit,” she has said, making clear her intention to take Britain out of the European single market. Whether she can heal the deep political wounds left by the EU debate remains to seen. What does seem certain is that there will not be a snap election, and May will stay on for the duration of the Conservative mandate until 2020.

At least that’s the plan. Let’s see what happens next week.