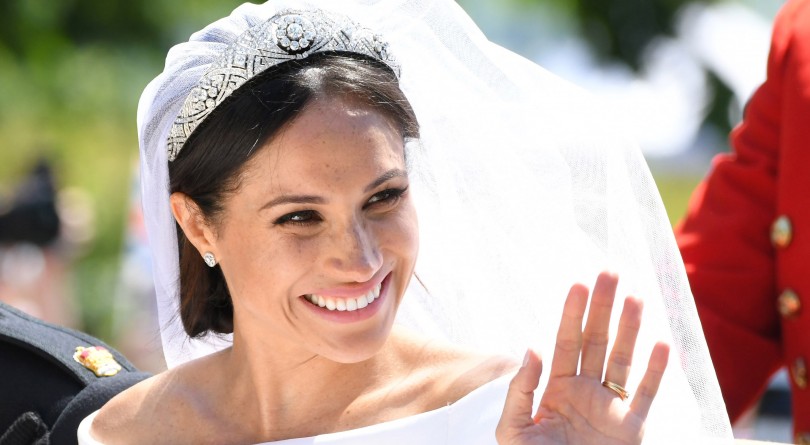 Meghan, Duchess of Sussex leaves Windsor Castle in the Ascot Landau carriage during a procession after getting married at St Georges Chapel on May 19, 2018 in Windsor, England. (Photo by Karwai Tang/WireImage)

Name one reason to add letters to the name, Megan. It’s a unique enough name as it is, which rhymes with nothing and was originally a pet form of Margaret until the 1902 birth of a British Parliamentarian.

Megan is easily pronounced, pluralized and translated in its five-letter form, but it has been warped by the parents of the world who take advantage of the free price of letters in strokes of linguistic inefficiency.

On Saturday, Meghan Markle married into the monarchy, bringing her misspelling and all. She will begin signing letters as “Meghan,” and the spelling will spread as children get named after the Duchess. The name historically acquired an “H” when the Welsh name was confused with Irish ones, and since I personally know the resultant irritation, I have become a Megan purist.

My own mispelling, Meagan, looks like it rhymes with “vegan,” but the extra vowel adds nothing except phone calls from people whose e-mails bounce back due to the confusing first name, which actually sounds more like “egg pan.” The name is now spelled with all manner of silent letters slinking in each syllable. As Markle changes her last name, I humbly suggest she also change her former.

The first Megan hardly died 50 years ago, but parents have gotten straight to the business of mispelling it. Megan Lloyd George (1902 – 1966) was the first woman MP in Wales and the daughter of a British Prime Minister. Before her birth, the name was merely a nickname for Margaret, but her parents made it a first name itself, I’m told by Cleveland Evans, a past president of the American Name Society.

“Some authors of baby name books couldn’t get their Celts straight,” Evans wrote to me when I asked him how to truly spell my name. He explained authors confused Megan with the Irish last names Meighan and Mehegan, and in 1977, a character by novelist Colleen McCullough brought the mothership: Meghann.

Parents have since gone wild. The United States released its Social Security list of baby names, showing that, in 2017, parents used at least seven variations of the name (the list doesn’t include names with fewer than five cases). There were 162 American Meghans, 47 Meagans and 7 Maegans, and while Canada doesn’t publish a federal list of baby names each year, Alberta’s data from 2016 shows the province had two Meghans and one each Meagan, Meaghan and Megyn.

I didn’t know how to spell my own name until seventh grade. I had always just been Meg, so on my first day of junior high school, I wasn’t expecting a homeroom teacher, while taking attendance, to ask me out of curiosity how I spelled my name in full. I did not know, nor did my parents when I asked them that night. My mother checked my birth certificate, and we concluded an “A” had been slipped in. You sneaky Mom.

Markle’s first name is actually Rachel, with Meghan in the middle, but the name and spelling she goes by will likely gain momentum, as did Melania in the States (from 88 babies in 2015 to 283 last year) after one became First Lady.

Parents are name creatives, rendering at least 24 versions of Mackenzie and 36 versions of Mickaela last year in the States. In the most recent Alberta list, there was Meredith and also Mereditt; Samantha and also Samandriel. When parents get to name their children, they do not pay per letter, but may they dine in moderation at the alphabet buffet.