Are First Nations back to vague assurances on child welfare?

Jane Philpott's emergency summit reflected a new era of good will. Concrete agreements were harder to come by. 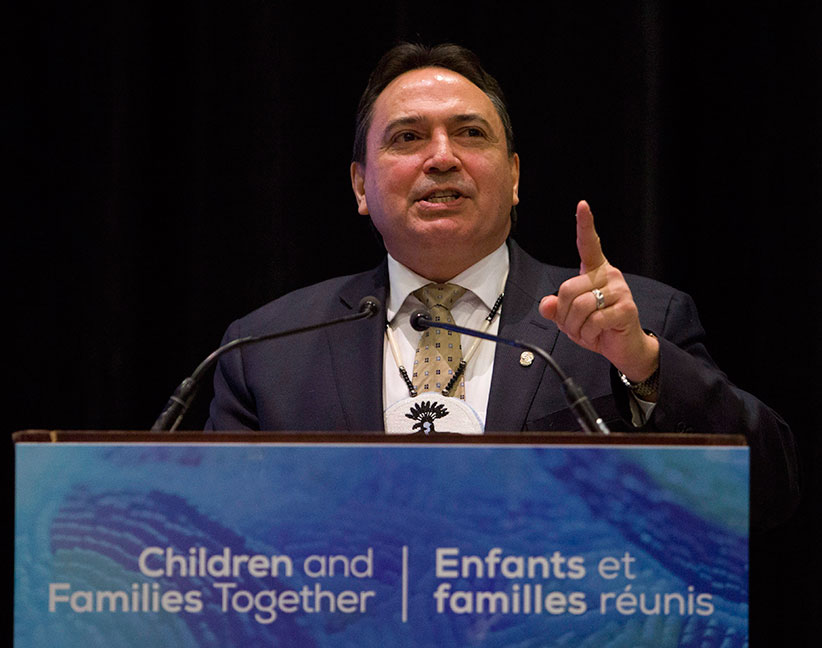 At a panel discussion behind closed doors devoted to Métis youth, Gerald Lavallee spoke nervously about his time in foster care. Carolyn Bennett, the minister of Crown-Indigenous relations and northern affairs, sat nearby—paying close attention. Lavallee’s first contact with the system came when he was three months old. He grew up in it, living in 40 different homes throughout his life (he recounted to Maclean’s what he told the group). Now 25, he somehow remains hopeful, saying, “Everyone is going to walk away from this meeting with a better understanding of what it means to be a foster kid.”

Indigenous Services Minister Jane Philpott capped her two-day emergency summit on Indigenous child-welfare with a stock of enduring good will—if little in the way of specific fixes. First Nations leaders, child-welfare experts and advocates from the across the country had accepted her invitation, in hope of addressing the gross overrepresentation of Indigenous children in care. In 2016, Indigenous kids made up just seven per cent of children under 14 in Canada, but represent a disproportionate 52 per cent of those in care.

Lavallee, who is from North Bay, Ont., spoke about growing up with anger issues and depression, and how the system can rob children of hope. Now working for the Métis Nation of Ontario, he’s an advocate for Indigenous youth and no stranger to being in front of Ottawa politicians—these days, he greets Bennett with a hug rather than a professional handshake. “I like to think that when those leaders hear the true stories, that it does something that touches their heart,” he says.

RELATED: How First Nations are fighting back against the foster care system

What change that connection will yield is still unclear. The past several days have seen a flurry of activity from Philpott, who before holding this summit announced her five-month-old department’s key priorities to close the socioeconomic gaps that exist between Indigenous peoples and Canadians. Commitments ranged from better housing and infrastructure on reserves to a new fiscal relationship providing long-term funding arrangements for First Nations.

At the onset of the emergency meeting, the minister touted six points of action to reduce the number of children entering care and bring kids home faster, including full compliance with the orders from the Canadian Human Rights Tribunal and to implement Jordan’s Principle, a policy ensuring jurisdictional disputes don’t block First Nations children from getting medical services, so named after the death of a boy named Jordan River Anderson. (In 2016, the tribunal ruled that the federal government was racially discriminating against Indigenous children by chronically underfunding child-welfare services.)

“The commitments that we’ve made here collectively together are strong,” Philpott said on the final day of the summit. But when pressed on how the federal and provincial ministers will work together to solve jurisdictional differences, her tone shifted: “There’s work to be done in terms of what that looks like in collaboration with the territories and provinces. I think the will is there.”

Others felt that something was missing at the end of the summit: a clear, concrete plan. For Cindy Blackstock, executive director of the First Nations Child and Family Caring Society of Canada, the first day felt less like a meeting than a conference. “I’ve seen this before,” she says. “Be vague and that way you don’t need to be necessarily held accountable.”

RELATED: Jane Philpott has a lot on the line at Indigenous child-welfare summit

Blackstock, along with the AFN and the Caring Society, launched the human rights case against the federal government in 2007. Talk of government compliance with the tribunal’s orders gave her a sense of optimism. But for her, it’s not same thing as clear plans of action agreed upon by all parties. “That’s my worry,” she adds. “Meetings like this, MOUs—all that kind of stuff—can make people think they’re doing the right thing, but change nothing. We need to be doing something that actually makes a difference for kids.”

On the final day of the meeting, AFN National Chief Perry Bellegarde and several Indigenous leaders went behind closed doors to mull over the various commitments and assurances given to them by Ottawa and provinces. Bellegarde did not see what he had hoped for coming out of the meeting: a formal announcement of partnerships with First Nations governments. “My big push was that you need to find processes that unite rather than divide,” he says. “They’ve got to communicate, they’ve got to talk, they’ve got to pay the actual costs.”

Like Blackstock, Bellegarde stresses the orders from the human rights tribunal and expects to see the federal funding gap addressed in the 2018 budget. As for the meeting, Bellegarde says it was a start but that they need to happen annually: “I see a great focus on this human rights crisis, now.”

Nearly two years ago, during a sunrise ceremony on National Aboriginal Day, Lavallee found himself paddling a canoe with Justin Trudeau along the Ottawa River—the Prime Minister sat in front. Lavallee told Trudeau that he voted for the first time in 2015, casting a ballot for the Liberal leader and the promises he made to Indigenous peoples. As they sat together, Lavallee recalls asking: “Are you going to keep your promises?” Trudeau looked back at him and said: “I’ll try.”