Can we talk? Sports is still a man’s world. 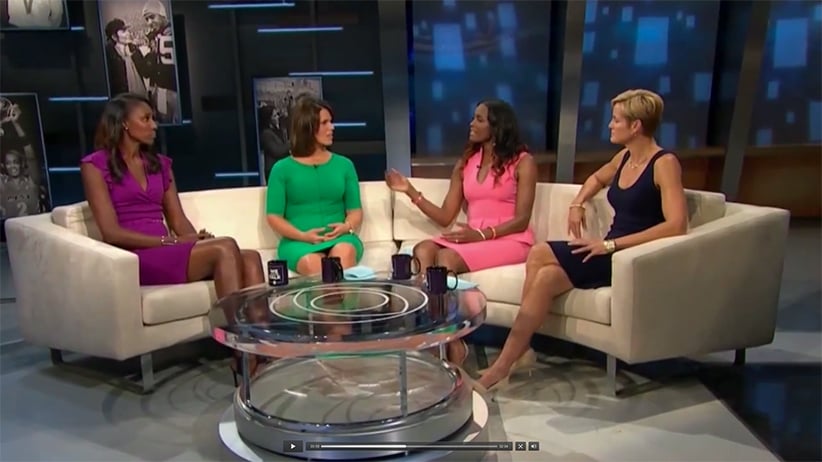 In the world of sports, women are mostly invisible players. According to the University of Minnesota’s Tucker Center for Research on Girls and Women in Sport, women receive just four per cent of sports media coverage even though they represent 40 per cent of all American athletes. It appears the only time the world cares deeply about women’s sports is during the Olympics, when patriotic fervor and high stakes are involved. Female athletes are worth our while, then, when they’re competing like their lives depend on it; I don’t know a single hockey-loving Canadian who did not tune into the gold-medal women’s game in Sochi this year, when the Canadian and U.S. teams—perfectly matched—played the kind of blood-pressure-raising hockey their male counterparts couldn’t.

The uncomfortable truth about women’s sports, though, is that Olympics aside, we don’t watch enough of them to keep many of our best female athletes gainfully employed, let alone rich with endorsement deals. After the Sochi Olympics, Finnish goalie Noora Raty famously quit women’s hockey for good, claiming that she couldn’t afford to train at the game’s highest level while working part-time to pay the bills. According to the online news site The Daily Dot, last year “only two of 102 Sports Illustrated magazines had women on the front, and both of those covers featured Kate Upton, who is a model.” Canada’s Sportsnet magazine (which is owned by Rogers Publishing, Maclean’s parent company) has been better in this regard: In 2012, the magazine named Canadian soccer star Christine Sinclair its athlete of the year. But the reality remains that, overall, sports fans—both male and female—do not get nearly as excited about women’s professional sports as they do about men’s sports.

Perhaps it was with this disparity in mind that CBS launched We Need To Talk late last month, the first-ever, all-female sports talk show that will feature some of the biggest stars in women’s sports: contributors include U.S. Olympic swimmer Dara Torres and WMBA basketball stars Lisa Leslie and Swin Cash. In other words, if sports media wouldn’t cover notable women athletes, it would give us the next best thing: notable women athletes covering sports. Well, sort of.

On the show’s debut broadcast, the all-female panel didn’t cover sports so much as dissect the culture around it. One lengthy topic of discussion was Janay Rice’s abusive relationship with her disgraced former husband, Baltimore Raven Ray Rice, an issue some of the panelists linked to their own personal experiences with domestic violence. The show has already drawn comparisons to The View, not just because the cast is all female, but because the topics raised aren’t sports specific—at least not in the same way men’s sports shows are. One panelist, former Oakland Raiders CEO Amy Trask, says this is intentional. “It’s definitely not a show about women’s sports,” she told the press prior to the premiere. “It is a show about the overlap of sports and society hosted by women and directed by a woman.”

The question remains, however: Are females viewers interested in this kind of gender-inspired hybrid? And is this model good for women athletes and their fans? Recently a Fox News panel talked about what a novel idea the show is: “Women like stories,” said one host. “Men like statistics,” said another. Frankly, I like both, but I prefer them in separate doses. I love The View on a weekday afternoon when I have the flu, but I don’t really want my sports coverage watered down with View-style cultural commentary. The notion that I might is more than a little patronizing. This model may resonate with women who were previously uninterested in sports, but I doubt it will appeal to die-hard female fans, who aren’t exactly perfect paradigms of sensitivity where their favourite teams are concerned. When the Toronto Maple Leafs blew their three-goal lead to the Boston Bruins in the playoffs last year, the women around me at a Toronto bar were far more interested in overturning garbage cans than talking out their aggression.

I’m unconvinced that a daytime-style TV show is the answer to a sexist sports world, which, despite platitudes about respect for female fans and broadcasters, continues to cleave to the grossly superficial. In mid-July, Fox announced plans to replace 53-year-old NFL sideline reporter Pam Oliver, a 19-year network veteran, with the drastically younger, blonder, Erin Andrews—a decision Oliver described as “humiliating.” I don’t recall anyone telling Don Cherry to take a hike when his hair turned white. It’s also important to note that female sports broadcasters, many of them former professional athletes, are pilloried daily online by misogynist trolls. I hope that We Need To Talk, despite its embarrassingly earnest name, achieves nothing but enormous success. It offers a range of perspectives rarely heard in the mainstream sports world. But it isn’t a triumph for sports egalitarianism. It is a crude reminder that our best female athletes make the bulk of their income talking sports, not playing them.