'Run! It's coming this way': What it's like at the centre of a tornado

‘My husband had to pry her hand away from that table. She never did hear me screaming for her.’ 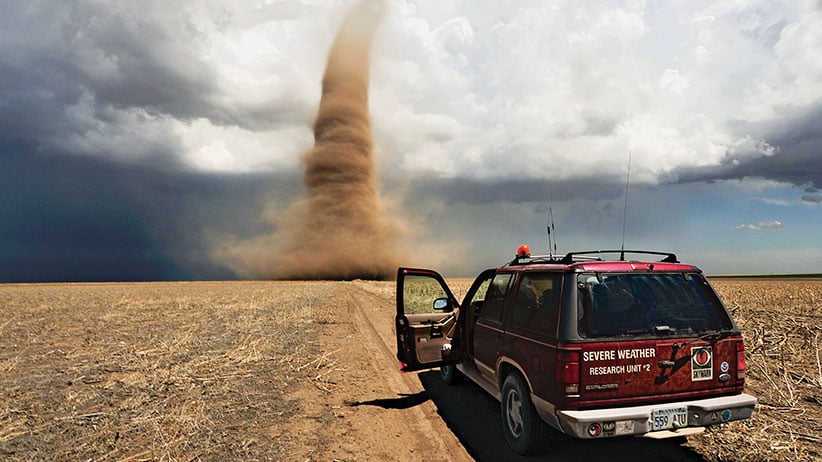 Barbara Deerman, owner of Wright’s Restaurant in Tuscaloosa, Ala., whose home was destroyed and her business heavily damaged by the tornado that swept through the southeastern U.S. in April 2011, killing more than 340 people.

“We were standing on our back porch and we saw it turn and come this way. It doesn’t look that big from a distance, but it’s on you before you know it. I said, ‘It’s coming this way,’ and my husband said: ‘Run.’ You don’t have time to think. We ran in the house and got in our bedroom behind our door. We saw our ceiling flop up and down. He said to hold on, that we were fixing to be sucked out.

My sister-in-law, she ran in the living room trying to get her little poodle. I opened the door to scream to her and the stuff from my dining room was coming toward my bedroom door. It peeled the paint right off the door. I pushed it open a bit to scream, but she couldn’t hear. It was so much roaring and everything flying in so many directions, you couldn’t hear anything. It’s worse than being right next to a train.

It seemed like we were in there for a long time, but they said it was two or three minutes. Then it just stopped. When it’s gone, it just stops still. Everything is just still. There’s no wind.

My sister-in-law, she was in shock and her knees were all skinned up. The front room of our house, it got blown away and came toward her. When we got through, my husband went in there to try to find her. She was beside the fireplace, behind the recliner and next to a wrought-iron table. My husband had to pry her hand away from that table. She never did hear me screaming for her. Everything just got destroyed.

We had a two-storey house, and it took the top layer off our house and put it on the next street. It tore up our living room, our kitchen, our dining room, all that stuff. Our roof was in a tree. Our stuff was all over the neighbourhood—because it wasn’t a neighbourhood anymore. It’s a sight you won’t forget.

My husband was a musician and he had these big old heavy speakers, and my grandsons found them on the next street. Our washer was out in the yard, and our dryer was out there too, but the tub had nearly pulled out of it. It looked like an atomic bomb had come behind our house; that’s exactly what it looked like.

The next night, we went and looked and we know now why we were saved. Our chimney fell right on the corner of our bedroom ceiling, and that’s the reason the ceiling couldn’t come off. The good Lord knew and he pushed that chimney right on top of us. Nothing bothered us in there.”

— as told to Tamsin McMahon