Feminism is not whatever you want it to be 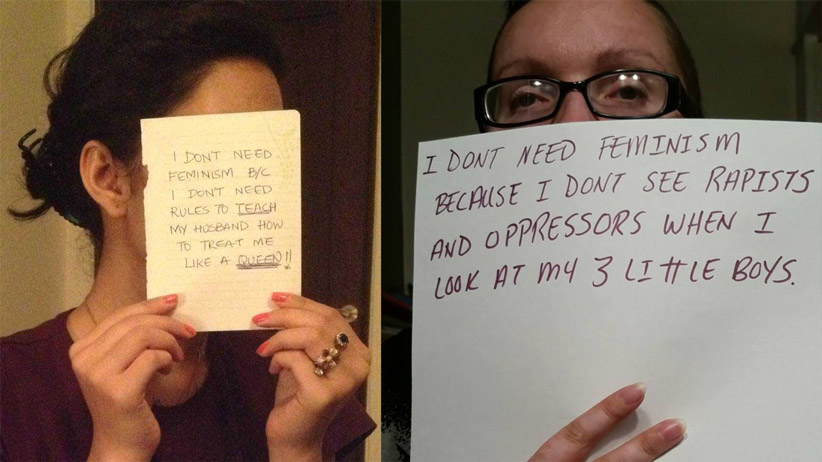 In the early 1970s, Joan Didion wrote an unkind essay about the burgeoning feminist movement in North America; a movement, she argued, in which “even the brightest women found themselves engaged in sullen public colloquies about the inequities of dishwashing and the intolerable humiliations of being observed by construction workers on Sixth Avenue.” In other words, despite its remarkable gains and grit, the women’s movement seemed eternally bent toward self-indulgent insecurity and pearl clutching. In times of strength, it spoke of nothing but fragility. Didion may not have been entirely fair to the female pioneers who secured her right—and mine—to live as a first-class citizen. But she certainly was on to something. Fast-forward four decades and fragility has all but swallowed the women’s movement whole.

Today, Western feminism isn’t concerned primarily, as it should be, with civic action, but with overreaction to unsavoury elements in popular culture (sexist song lyrics, sexist TV writing) and a never-ending obsession with the identity politics of “privilege.” Every space where feminist theory and issues are discussed must be a “safe” one, which is to say a conformist one. According to the Geek Feminist Wiki, a popular online feminist forum, a “safe space is an area where a shared political or social viewpoint is required to participate.” Discussions, therefore, tend to end before they begin, unless they devolve into yelling matches between men’s rights activists (a ragtag collective of angry virgins and divorced dads) and indignant feminists (a ragtag collective of angry everything) futilely trying to reason with them.

Despite this shift toward insular Internet bickering and suffocating identity politics, the number of self-identified feminists in America increased nine percentage points between 2008 and 2012, according to a 2013 poll for Ms. Magazine, a feat former Jezebel editor-in-chief Anna Holmes attributes to “attacks on abortion access” in the United States and the sexist treatment of female politicians like Sarah Palin and Hillary Clinton. However, Holmes told Glamour, “Some people think that even uttering the word feminism is equivalent to saying ‘men suck.’ ”

Now, it turns out, those people are organizing. Enter the Women Against Feminism campaign, a social media bonanza conceived by real women all over the world who have recently taken to Tumblr, Facebook and Twitter in the thousands to decry modern feminism with selfies and hashtags. Posts range from the defiant—“I don’t need feminism because I am not a victim”—to the crudely practical: “How the f–k am I supposed to open jars without my husband?” A few others that capture the spirit of the movement include: “I sure as hell don’t need anything that makes playing the victim out to be empowering,” “I don’t need feminism because I don’t need a leg up to succeed,” and, “As a raped woman, I know not all men are monsters.” (One of the most surprising and interesting things about the campaign are posts that appear every so often by survivors of sexual assault, seemingly critical of the feminist concept of rape culture.)

It’s easy to dismiss Women Against Feminism in the same fashion sexists often dismiss Sarah Palin: as a stupid, irrational, destructive force, blindly and proudly acting against its own interests. But to do so is shortsighted. After all, the most telling thing about the campaign isn’t its blasé attitude toward patriarchy, but its cluelessness about the thing it means to reject. Go online and read the posts. These self-proclaimed anti-feminists, judging by the slant of their complaints (“I am not a victim”) regard feminism as a synonym for political correctness, humourlessness and fragility: Feminism, in their eyes, is a declaration of weakness, rather than strength. It is Joan Didion’s dig on steroids.

In other words, nobody “against feminism” actually knows what feminism is: the social and economic equality of the sexes. That says a lot more, I think, about the current state of fourth-wave feminist activism than it does about the women admonishing it.

In its modern form, feminism alienates people with dissenting opinions, and confuses everyone else. Are we talking about genital mutilation in Mozambique or the inequities of dishwashing in Medicine Hat? It’s like a phenomenally less sexy incarnation of Ryan Atwood, the romantic lead on The OC, who is famous for telling his girlfriend, “I’ll be whatever you want me to be.” And that’s a problem. Movements need not only conviction, but focus.