For transgender women, the pay equity gap is even wider 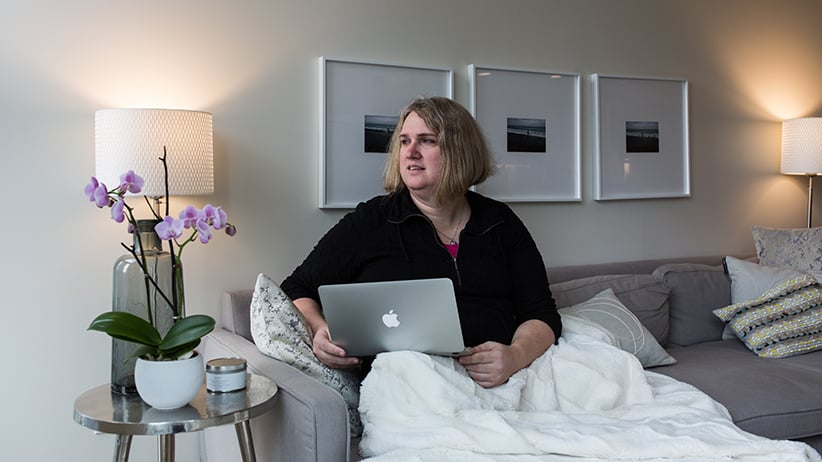 Clayre Sessoms at her home in Vancouver, BC. (Photograph by Jackie Dives)

Clayre Sessoms’s career was on track. After earning a bachelor’s degree in communications, she worked as a freelance copywriter for more than a decade, with a stint at New York’s renowned WNYC radio station as well as at marketing ﬁrms and advertising agencies. Between her strong portfolio and network of satisﬁed clients, she rarely had to seek out work. “I was successful,” says Sessoms, now 40 and living in Vancouver. “It was a great situation—until I started to come out.”

Sessoms is transgender and began identifying and presenting herself as a woman in 2013. Shortly thereafter, she experienced changes in her career. “First, things were great. Then, as I interacted with clients, I noticed a new distance from one agency and then another. I used to make a lot during our busiest months, but after coming out? Nothing,” says Sessoms. Over the past ﬁve years, the copywriter says her once-comfortable freelance career has been “slowly evaporating.”

“There have been times I’ve been perfectly aligned with the job description and capable, but they cite my ‘skills’ as a reason for ‘going in another direction,’ ” says Sessoms.

READ: Why the gender pay gap is worse for women of colour

Losing work after transitioning is just one challenge affecting the ability of trans women to earn a fair wage. Women overall are paid 87 cents on the dollar compared to men on an hourly basis. But the gap is more severe for trans women like Sessoms, according to Sarah Kaplan, the director for University of Toronto’s Institute for Gender and the Economy. “When we think about the gender wage gap, we tend to think on the gender binary of male and female,” she says. “But there’s an increasing awareness that gender isn’t binary, and we’re not really including the experiences of, for example, trans and queer people when calculating these measures.”

Ample evidence demonstrates a clear reduction in the earning power of the transgender community. About half of transgender individuals earn $15,000 or less per year, even though 71 per cent have some level of post-secondary education, according to the widely cited 2011 Trans PULSE survey conducted by Toronto’s Sherbourne Health Centre. The same survey found only 37 per cent of respondents were employed full-time, while the National Transgender Discrimination Survey in the U.S. found that trans people experience double the rate of unemployment compared to the general population. And while some female-to-male transgender workers earn more after their transition, male-to-female transgender workers can see their earnings drop by nearly a third, says research published in the B.E. Journal of Economic Analysis & Policy.

“I never had a problem getting a job interview when I presented as a male,” says Mya Hicks, a 29-year-old from Guelph, Ont. With a strong track record in retail and customer service, Hicks says she would easily land at least one or two interviews after handing out 10 resumés to store managers. But like Sessoms, that all changed after she began transitioning in 2015. “You know when you walk in somewhere and you’re being looked at and judged for not being the same as everyone else? It was like that,” she says.

Transgender individuals struggle to ﬁnd work even when they aren’t meeting face-to-face with potential employers, says Carleton University associate professor Dan Irving, who is researching the subject. While trans women apply to jobs under their chosen name, their background records and references may use their birth name or incorrect pronouns, indirectly “outing” them. Participants in Irving’s study feel employers often do not “want the hassle” of hiring a trans person when they could easily hire a non-trans person. And just as there’s evidence of ethnic minorities and women struggling to get past the resumé stage, employers also seem to approach applications from gender-non-conforming individuals differently as well. The very mention of being involved with LGBTQ organizations on a woman’s resumé made employers significantly less likely to respond compared to applicants who were perceived to be heterosexual, a New York University study found.

READ: Why Maclean’s is asking men to pay 26% more for our latest issue

These issues can limit a person’s career even before it begins. Scarlett Jodha began presenting as a woman at 16, and has wrestled with workplace challenges even before she had her ﬁrst “real” job. She recalls the inappropriate questions from colleagues during a youth employment program. “I was asked about my genitals and if [transitioning] was something that I was doing because I wanted to be like my sister,” she says. “They’re trying to get some form of knowledge since I’m in their face. But that’s not what we’re here for, it’s not the time and it’s not appropriate,” she says.

Hicks, too, is early in her career, but she’s already facing setbacks. She works part-time at a bar in Guelph where she knew the manager, supplementing that income with Ontario Disability Support, which she began receiving before her transition. But since she started presenting as a woman, she has not had a single job interview. “All a trans person wants is to be respected like everyone else and to be given the same opportunities as everyone else,” says Hicks. “If someone is qualiﬁed and the right ﬁt for the job, their identity shouldn’t be a factor. It’s discrimination.”

Even after they ﬁnd employment, signiﬁcant barriers prevent trans individuals from advancing at the same rate as their cisgender colleagues—further widening the wage gap. A recent Ontario-wide study entitled “Transforming Justice,” which will ofﬁcially release a series of reports over the next few months, found that at least one in ﬁve transgender respondents experienced setbacks over the past three years, including improper employment terminations, unfair disciplinary procedures, persistent harassment and unpaid wages.

Nadia, who asked that her real name not be used, landed a job after years of searching, only to face new problems. She ﬁrst came to Canada from the Middle East, looking for a fresh start. An engineer in her home country, she knew she would have to start over, learning French and completing an apprenticeship to be employable in Quebec where she was living. She eventually managed to secure a short-term contract in her ﬁeld. On her ﬁrst day, someone emailed her new employers and sent a fax to the company informing them that Nadia was a “shemale” and raised concerns about the image of the company. Nadia is convinced the email came from one of her colleagues, but says the company insisted that no one in their ofﬁce would act in that fashion. They instead accused Nadia of bringing problems to the workplace. She stayed at the company, but was eventually let go after four months of her contract. She resorted to freelancing online and social assistance to sustain herself.

Stories like this are all too familiar for advocate and public educator Dalia Tourki, a trans rights advocate and public educator at the Centre for Gender Advocacy, an organization affiliated with Concordia University. “This is a community that even though it is basically protected by the law, in more day-to-day realities, people are still experiencing discrimination and transphobia, which leads them sometimes to quitting their job or living through this harassment just to be able to have a minimal kind of income,” she says. This struggle affects more than just a trans woman’s bank account. Numerous studies, including the Trans PULSE survey, found that chronic unemployment and underemployment contributed to high rates of depression in the trans community.

Tourki says there are things companies can do to start closing the transgender wage gap, like allowing employees to have an email address with their chosen name rather than the one that appears on their original birth certiﬁcate. Other measures include encouraging hiring managers to learn more about the trans community, creating speciﬁc policies that include gender identity and gender expression as protected grounds, and allowing these people to access the washrooms they choose. 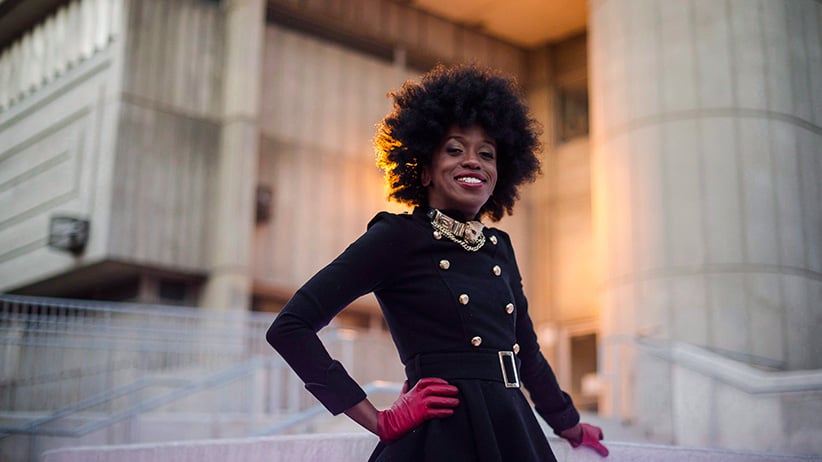 Biko Beauttah poses for a portrait in Toronto, on Saturday, November 11, 2017. (Christopher Katsarov/CP)

While structural and social change is slowly happening, grassroots advocates are taking action to help open more job opportunities to trans individuals. In November, Biko Beauttah, a trans woman who moved to Canada from Kenya, launched Trans Workforce, the nation’s ﬁrst job fair held speciﬁcally for transgender job seekers. Beauttah, who has struggled with unemployment herself and turned to sex work for a number of years, calls the event a “transolution”—a solution by trans people for trans people. The event, held in Toronto, hosted 23 companies including TD Bank, the Durham District School Board, the City of Toronto, Apple Canada and various arms of the Ontario government. “It was very surreal,” says Beauttah, now working on a second Trans Workforce fair this June. “I’m having a hard time describing it because I have never seen anything like it before. I have never seen a job fair full of trans people with employers eagerly there to hire them.”

Beauttah says the event wasn’t just an attempt to give trans individuals the same opportunities as other job seekers, but also to increase their representation throughout the labour force. “You need to not only give us opportunities but also give us chances to advance ourselves, so that we can see the same diversity reflected at the top,” she says.

Among the more than 250 trans individuals who attended the job fair was 19-year-old Jodha, who served as the event’s emcee. Looking around the room, Jodha realized she was “seeing a few hundred people who were all in the same boat as me.”

While excited by the event’s success, Beauttah says she hopes her creation will soon become obsolete. “Trans Workforce is great,” Beauttah says. “But my goal through this job fair is to normalize the trans experience to the point where we won’t need Trans Workforce to exist anymore because we’ll be living in a world where trans people are seen as equal in the workforce.”