An accomplished DJ and martial artist, he was a gentle giant, once lauded as a hero for chasing down a robber 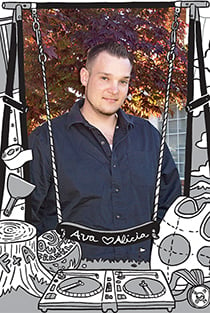 Frank Simchak Jr. was born on Sept. 3, 1982, in New Westminster, B.C., the third child and only son of Frank Sr., a drywaller, and Susan, a homemaker. In chasing construction booms for work, Frank Sr. moved the family around often. When Frank was 2, they left for Los Angeles.

With his sisters, Susan and Helen, eight and six years older, respectively, Frank was the baby and the blue-eyed object of his dad’s affection. As a preschooler, his father took him fishing for the first time. Frank couldn’t throw the line far, but he managed to reel in a five-inch catch. “He was running all over, showing it to people he didn’t even know,” recalls Frank Sr.

The family moved back to B.C. in 1989, settling in Port Coquitlam. From a young age, Frank was protective of those closest to him. At age 6, he met Brent Aldred, a four-year-old who lived in the same apartment complex. “This kid was actually beating me up and Frank came and stopped it,” recalls Brent. The two became best friends.

Frank Sr., a black belt in kung fu, routinely watched Bruce Lee movies with his son, and Frank begged his dad to enrol him in tae kwon do. He excelled at it, winning first place in kickboxing at the B.C. tae kwon do championships at age 12 and taking home a gold in sparring at the U.S. championships four years later. He grew to be six foot four and 250 lb., a gentle giant, but still “faster than anyone,” says Frank Sr.

Frank’s mother was diagnosed with kidney cancer in the fall of 2002. She died a year later, but not before giving her son a set of turntables to encourage his interest in music. After she passed away, Frank took up drywalling as a day job but practised spinning records and beatboxing in his spare time, landing gigs at weddings and local nightclubs under the name DJ QuiteFrankly. He had a respectable following and even opened for hip-hop legends Warren G and Lil Kim. While playing at the 2009 Shambhala Music Festival in B.C.’s West Kootenay mountains, Frank met Alicia Kiefiuk, a 24-year-old nurse. She was instantly drawn to his large stature, and the two swapped phone numbers. They bumped into each other at another festival weeks later and were making their way to one of the stages when Frank tripped over a large tree stump, landing flat on his back. “He said, ‘Help me up,’ and I said, ‘Not until you kiss me first.’ So I leaned in and we had our first kiss.”

Frank and Alicia moved in together in April 2010. Two months later, Alicia was pregnant. “We were head over heels for each other,” says Alicia. The couple got married at a golf course in Surrey, and their daughter, Ava, was born on Feb. 22, 2011. In June, they decided to take some time apart and Frank moved out. But he continued to see Ava often, taking her to parks and playgrounds and building her blanket forts in his living room. Although Frank and Alicia had their differences, she always felt safer when he was around. “He was fearless,” she says. “He would just get into this hot-shot, marital-arts-guru, tough-guy mode.”

Last September, Frank was using the restroom at a Subway restaurant in Vancouver when he emerged to find an employee crying after her till had been robbed. Frank chased down the suspect and knocked him out, keeping an eye on him until police arrived. Newspaper reports lauded Frank as a hero, but he only expressed concern for the traumatized employee.

Over the last few months, things had started to fall into place for Frank. He and Alicia were getting along, and he was doing well at his construction company.

On March 17, the day before he was scheduled to oversee a drywalling job in Calgary, he took Ava and his dad out to the playground. Frank Sr. was pushing Ava on a swing, and was surprised to see his son in tears when he looked up. He asked what was wrong and Frank replied, “This is the happiest day of my life.” Later, at the airport, Frank kissed Alicia and made a commitment to work on their relationship when he got back home.

At the construction site the next day, He went to use to a mechanical lift. He was alone; it was around 4 p.m. and many workers were leaving for the day, but he wanted to get one last task completed. Sometime later, he was found pinned between the machine and the ceiling, unconscious. Frank was rushed to hospital and put on life support. He died four days later on March 22. He was 30.