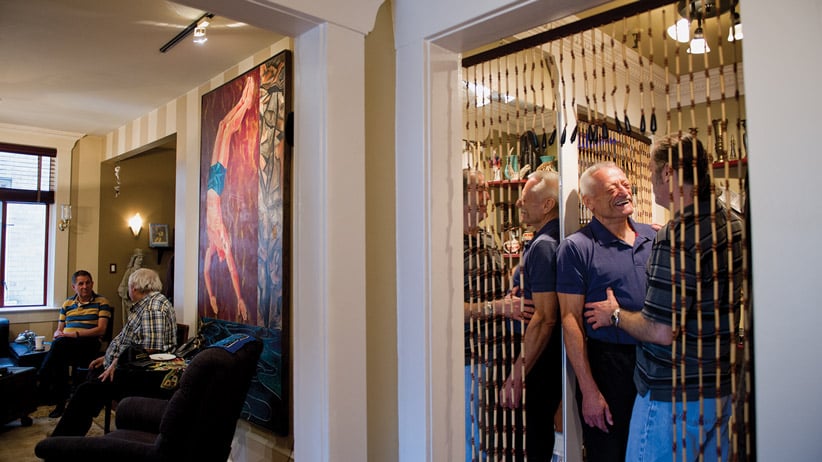 For more stories like this, watch Ellen Page and Ian Daniel’s Gaycation on the newly launched TV channel VICELAND. Here’s how to watch.

When 52-year-old Fraser Doke underwent a liver transplant in Vancouver last year, he found himself in an uncomfortable position that had nothing to do with his health. The surgery, recommended after he was diagnosed with two tumours on his liver a year before, had gone just fine. But the care he received afterward, at the University of British Columbia Hospital, had not. One of the nurses on his floor approached him and asked that he refrain from talking about his “past life” in front of his three roommates. “I’m not saying that we don’t accept you,” she told him. “I’m just saying . . . be a bit quieter.”

Doke is openly gay, as was his visitor that day, a “flamboyant” male friend who walked into the hospital room and announced, enthusiastically, “Hey girl! How are you doing?” “I told him something like, ‘I’m feeling a bit s–tty,” says Doke, “ ‘I wish I could go out and meet a man.’ ” One of the patients in the four-bed ward, whom Doke suspects was homophobic, complained to the nurse. As a gay man living with HIV and a survivor of “reparative” electroshock therapy (which he received at 13 in an effort to “cure” his homosexuality), Doke was decidedly unwilling to keep quiet. “Finally we’re respected by the government after all these years, and now, in care, I should put a hand over my mouth?” He complained to the head nurse that night and received an immediate, heartfelt apology. Today, at the suggestion of one of the hospital’s doctors, he has applied to be a volunteer mentor to UBC students in health care programs who are interested in learning how to better serve LGBT patients.

He is also an active member of Gay and Grey—a seniors group founded by Vancouver queer activist Alan Herbert—that meets regularly to discuss issues around aging in the LGBT community, namely loneliness, housing and health care discrimination, and feelings of alienation in a gay world focused predominantly on youth. Doke isn’t a senior yet, nor is he entirely grey, but he is one of many LGBT Baby Boomers in Canada wondering what awaits him. “There are a lot of gay people who are starting to age,” he says. “And what type of care are we going to get? The type that will make us go back into the closet?”

After the incident at the hospital, Doke randomly phoned some private retirement homes and long-term care facilities in British Columbia under false pretenses. “I have a friend who is transgendered and looking for placement,” he would say. “Is that going to be a problem?” No one institution was blatantly offensive, he says, but they were squeamish. Most agreed to “accept” an LGBT resident, but expressed a hope that he or she would “please keep it private.”

As Toronto hosts North America’s first World Pride celebration at the end of June, the city’s Senior Pride Network is gearing up for its annual conference on aging in the LGBT community, which will deal with the kind of subtle homophobia described above. “Opening the closet on aging: Wired to connect” will feature panels on disability services, discrimination, and discussions about bridging the gap between young queer people and old.

Rinaldo Walcott, chair of the sociology and equity studies department at the University of Toronto and a keynote speaker at the last conference, says queer people tend to view themselves, and their culture, as eternally youthful without considering the possibility that growing old may mean “coming out again and again in old-folks homes.”

With an increasing number of “out” seniors in our society, he asks, “What kind of training is now required for people who work with seniors, who can no longer assume that they are all heterosexual?”

Marie Robertson, the community developer at Ottawa’s Senior Pride Network, runs diversity training workshops with homecare workers and staff at seniors facilities on how to be inclusive and considerate of LGBT patients. Her approach is simple: give them a rundown of LGBT history and present them with realistic case scenarios. “Well, why do you think Bob is so closeted?” she says, acting out a hypothetical case she might use in a session. “Bob grew up in a time when it was a criminal offence to be gay.” Robertson finds it effective to “get to the heart” of the people she’s trying to change. She showed one group a made-for-TV movie, If These Walls Could Talk 2, about the emotionally fraught relationships of three lesbian couples, set a generation apart beginning in 1961. Some of the staff and residents cried. “It was an incredibly powerful afternoon,” she says about the screening of the movie, which deals with the pain of a closeted relationship, as well as a more modern problem, the discrimination faced by children of gay parents.

Robertson has heard all manner of harrowing anecdotes about LGBT seniors in both long-term care and home care, from an elderly gay couple who felt they had to hold hands in the bathroom so as not to attract negative attention from staff, to a trans woman who was brutally humiliated by staff who couldn’t contain their laughter when they realized upon changing her that she had a penis. But she maintains that most staff are receptive to the training, and are better caregivers for it. “[Homecare workers] are hardworking, often underpaid people, and our intention isn’t to point fingers that them,” says Andrea Daley, an associate professor at York University’s school of social work in Toronto, whose research involves access to LGTB health services.

Today there are a number of gay-friendly, long-term care facilities in North America, including Toronto’s Fudger House, one of three homes in the city that prides itself on catering to sexually diverse seniors.Last year, Sweden’s Regnbagen (Rainbow) House opened its doors to LGBT seniors in Stockholm, becoming Europe’s first all-gay retirement home in history. In Vancouver, Gay and Grey founder Herbert, 69, appreciates that such a facility exists, but is more interested, in the long run, in seeing mainstream senior services become more tolerant. “No one wants to create a ghetto and no one wants to be seen as excluding anyone else,” he says.

Exclusion and indignity, of course, cut both ways; a healing irony of later life is how often the excluded become the comforters. When Doke’s mother, who had forced him to have the electroshock therapy, got sick with cancer in the late ’90s, he invited her into his home and cared for her for two years. “Even though she didn’t fully accept homosexuality, she accepted me for who I was,” he says. “I held her hand when she died.” Doke gave his mother, in old age, the dignity her world had denied him much of his life. Surely that world can find a way to return the favour now.