How a North Bay pig is standing up for backyard chickens

Brent Johnson needed a symbol of his disgust with his city's anti-livestock bylaw. In Pork Chop, he found one. 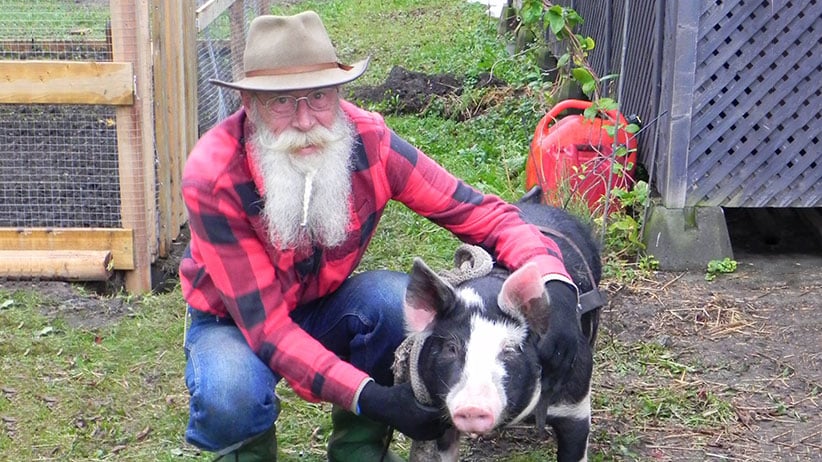 Brent Johnson considers himself an urban farmer of sorts. Rows of corn, vertical gardens and an array of black-eyed Susans surround his 121-year-old house in North Bay, Ont. There’s a gushing creek on the edge of his property and it’s not uncommon to spot deer roaming the area. One of his bedrooms serves as an indoor aviary for his flock of doves and common quail, the latter cleaning up the former’s food scraps. In his backyard sits a chicken run and coop, where his four hens once clucked—providing him organic eggs for breakfast and manure for his gardens. All of his animals must serve a purpose—the doves, for example, are there to lend a pleasant atmosphere. “I call it pets with benefits,” he says.

In March, Johnson’s meadow-like oasis was disrupted. He was served a notice saying he was violating a bylaw banning domestic fowl within city limits. Johnson was forced to relocate his brood of Jersey Giants to a friend’s homestead in Wanup, a town near Sudbury, where they have since become prize-winning show birds. As the months passed, Johnson lobbied local politicians to amend the rule, but after a presentation to council and, by his account, broken promises on the part of several councillors to back him, the city has thus far rejected his bid for a motion.

But Johnson wants to prove a point. “Everybody likes to piss off a politician every once and a while,” he says. The bylaw, he notes, lumps chickens into a prohibited category alongside cattle, goats, swans, horses, sheep, mink and foxes. But it’s a list with glaring omissions, so in September he hatched a plan. After deciding against a six-foot-two emu, Johnson purchased a Berkshire pig as a form of protest—and, as a first-time pig owner, named it Pork Chop. “A pig poops a lot more than a chicken does, is what I’m finding out,” he says, noting that there are about 20 other residents with backyard hens. “So you allow pigs but you don’t allow chickens?”

RELATED: Is keeping hens in the city a charter right?

North Bay, a city of about 52,000, passed its chicken bylaw in 1975. But in the intervening years larger cities across the country have opened up to the idea of urban poultry. Vancouver and several neighbourhoods in Toronto allow aspiring chicken-keepers to raise birds in their backyards, as do Brampton, Caledon, Huntsville, Kingston, Niagara Falls, Orillia, Quinte West and Waterloo in Ontario, and others in Western Canada. In Austin, Texas, residents are paid a $75 rebate to attend “chicken-keeping classes” in the hope that more urban flocks can put an end to food waste by eating old scraps, producing fresh eggs and nourishing the soil. Johnson modelled his own chicken facilities after the regulatory requirements of these cities.

One of the main arguments against urbanized chickens is the risk they’ll spread disease. But health authorities in Thunder Bay, Ont. cited this scenario as extremely unlikely leading up to that city’s decision last year to reject backyard chickens. Proponents point to the fact that chicken manure can be used an alternative to chemical fertilizers while demand for chicken-based services can benefit local economies. Critics complain that chickens are noisy and carry a horrid stench, an accusation with which northern Ontario chicken owner Kathie Hogan takes issue. In May, when Johnson delivered his presentation in North Bay’s council chambers, an odourless Henny Penny was quietly cooing off to the side. “Nobody knew Henny Penny was in my bag,” says Hogan, who’s had backyard chickens for the past five years, “and that was my point.”

To support Johnson’s cause, Hogan travelled the 32 km from Powassan, where residents must have at least five-acres before they can raise a maximum of five hens. Afterward, Hogan emailed North Bay’s mayor, Al McDonald, to let him know Henny Penny was silently spying on the proceedings, and received no response.

McDonald says he will remember Hogan’s act of defiance for years to come, but has no plans to revisit the issue of backyard chickens: “Right now it’s not a priority,” he says. “The city is worried about jobs and the college strike.” The mayor added he has no problem with Johnson’s new pet pig, noting, “There’s funny bylaws all over Ontario.” Councillor and deputy mayor Sheldon Forgette is in favour of backyard chickens, but needs more council support before bringing a motion forward. “The guy’s got a point,” he says. “You can have a pig or an emu, it’s kind of strange.”

Still, Johnson insists that council has “chickened out” and hopes he and Pork Chop can change things. People in North Bay are already spotting a man with a long, white beard walking a black-and-white pig in a hand-made leash and harness. Johnson tells them to spread the word on social media using #PorkChop. But like all of his animals, Pork Chop has a job to do. Johnson is training him to one day walk the roughly 900-metre stretch to city hall where he hopes a throng of supporters will gather—cheering on as Pork Chop greets politicians.

Johnson stresses that his new pet pig must be trainable to save his own bacon—hence the name. “If I’m going to name an animal I might be consuming, I shouldn’t call it some endearing term,” he says. “Inevitably, that’s why pigs get raised. I’ve led my granddaughters to believe that he’s going to be just that and if we do get another pig, his name is going to be Ham or Bacon.”

But this is a fight that is bigger than just North Bay, he says. He’s doing this for the same reason he grows corn, plants gardens and raises birds: his grandchildren. He wants them to learn how to provide for themselves. “Children are not learning essential life skills,” he says. “If Trump freaks out and all of sudden there’s anarchy, nobody would know how to raise a chicken.”