Shopping malls are dying. Here‘s how to bring them back to life.

For starters, they could house much-needed community services 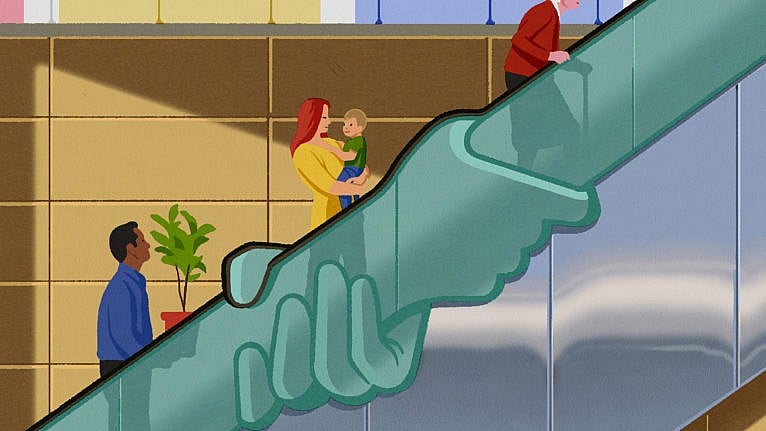 Andrew Gallici is a Toronto-based retail design director at Gensler, an integrated architecture, design, planning and consulting firm. Gallici believes there will always be a need for malls—but he’s also embraced online shopping.

I have a very long history with malls. Before embarking on a 30-year career in retail design, I actually worked in sales and visual merchandising for 12 years at Eaton’s in Toronto—a long-dead Canadian department store. Have you ever seen the show Superstore? That was pretty much me; I just had better taste. Since then, I’ve worked on projects for national banks, big-box chains and luxury brands, like Canada Goose and Holt Renfrew. You could say retail is very much a part of my personal fabric.

I love the act of shopping, but I’ve come to hate the shopping centres themselves. I’ve always believed the retail experience should be less throwaway and more meaningful than it is. There’s a real opportunity for malls to evolve away from formulaic collections of shops with food courts tacked on. They can be mixed-use social enterprises, ones that fulfill the needs of their respective communities and don’t simply consume the resources of the people who live in them.

Even before the pandemic, malls were struggling, and a Deloitte report released in June of 2020 showed that foot traffic in Canada’s 10 biggest malls was down 42 per cent from just a year earlier. Down south, it’s been estimated that a quarter of U.S. malls will close in the next three to five years. Amazon has even expressed an interest in turning shuttered Sears stores into fulfillment centres. The pandemic certainly expedited the growing conversion of brick-and-mortar businesses to e-commerce. I don’t think malls are dead; what’s changing is the expectation of what they should or could be.

I would advise against wholesale teardowns: not only are they a bad idea from an environmental perspective, but I can guarantee you people would just say, “Let’s build 20 more condo towers here.” That’s not to say we couldn’t demolish part of the mall for a beautiful park or green space, but the notion of repurposing an existing mould is far more responsible.

Instead, the mall’s infrastructure could be used to help citizens. There should still be room allocated for retail, but we need to balance how much of a mall’s square footage is required to run a financially successful operation, and how much of it can be filled with resources that benefit the greater good. For cities and towns that need health infrastructure, malls could offer dedicated wellness blocks consisting of smaller, independently owned fitness facilities, healthy food offerings, labs and individual medical practices—not just vitamin stores and juice bars. In areas lacking affordable housing, part of the mall might interlace not-for-profit spaces with geared-to-income units in the vein of Artscape’s lofts in downtown Toronto.

Given how expensive it is to build schools, smaller towns could take a page from Toronto Metropolitan University and Seneca College in North York and build educational facilities adjacent to—or directly into—the mall’s layout. On the cultural front, maybe these malls of the future have dedicated theatre space for live performances and festivals, or host rotating art collections that might otherwise be housed in smaller, less-trafficked galleries.
As homes in urban areas become increasingly vertically stacked, there is also a growing need for storage space that isn’t relegated to suburban warehouses. I’ve had many conversations with clients about the potential to leverage today’s technology to create more efficient storage facilities in a mall’s unused or basement space. The possibilities really are endless.

MORE: “I want to unionize as many Starbucks as I can get”

These newer, more socially conscious malls would still need to be managed: two of my former clients were members of retail councils in the United Kingdom. Here, those would be akin to a business improvement area, which is a potentially useful model in this case. As with BIAs, part of these theoretical mall councils would have to be made up of community members with broad expertise—across the culture, education and health care sectors, for example. They’d need individuals who know which resources the area is missing. And let’s not forget about the actual residents themselves.

I am still a believer in benevolent dictators: the council would certainly benefit from a board of directors and input from developers who know how to create successful business plans. They’ve been in a rote retail mindset for a while, to be sure, but they still know how to make money and execute on a vision. The mall’s revenue model would also have to change: the current one typically involves a retailer paying a base rent, plus a percentage of sales going back to the landlord. Perhaps this new model involves a financial partnership that gives back to local municipalities.

At a high level, amping up the mall’s civic usefulness is also a way to restore its original cultural function—as a communal gathering space. From 2006 to 2007, I lived in the United Arab Emirates while working on Dubai Festival City, which was then planned to be a 600-store mall. (This would be considered a small shopping centre in the U.A.E. by today’s standards.) I remember being fascinated by the way locals would treat trips to the mall as family activities. It wasn’t about spending $5,000 on designer purses, though you very well could have. People would make a whole night of the visit, entertaining their kids at the indoor playgrounds and arcades, eating meals at seasonal night markets and meeting up with friends. Granted, they may have also been there for the air conditioning, but the outing seemed to be more about the social component in a way that it has not been for Canadians in a long time.

I think a big problem is we’re still labelling a mall with one function: purchasing. If we can successfully develop mixed-use centres out of what were once single-purpose shopping malls, the necessary social cohesion can return, even in the post-pandemic, omnichannel world of retail. This change would also draw more diverse visitors to the space. Maybe one person goes there to look at a home, while another heads there for a concert. Maybe a young family decides to visit a mall’s on-site garden or take their kids to story time or crafts programming, and then rounds out the day at an outdoor movie screening. Ideally, you could sink a whole day into these sprawling communities—and give new life to the term “mall walkers.”

Some malls, like Toronto’s Yorkdale Shopping Centre, are in the early stages of exploring redevelopment via densified residential towers. What’s nice is that the plans do away with the usual above-ground parking to create a pedestrian-friendly centre, with outdoor plazas and lots of green space. I’m encouraged, but a major caveat for me is that our retail trajectory needs to be toward inclusive, master-planned neighbourhoods—not malls surrounded by condos. We’ve got a unique chance to tear down the silos of commercial and community and build spaces that help local residents thrive, in all senses. And, yes, we could even throw in a food court, if they wished.

I don’t even want to call these buildings “shopping centres” anymore. The name should reflect the mall’s new breadth of experiences. What about a “city centre” or a “community hub,” with the name of the city at the front? Malls will continue to live on. All I’m saying is: let’s make the experience a little bit richer.