A line in the sand for on-the-job harrassment

Emma Teitel on a CBC reporter's response to an unwanted kiss, and why it isn't a case of political correctness run rampant 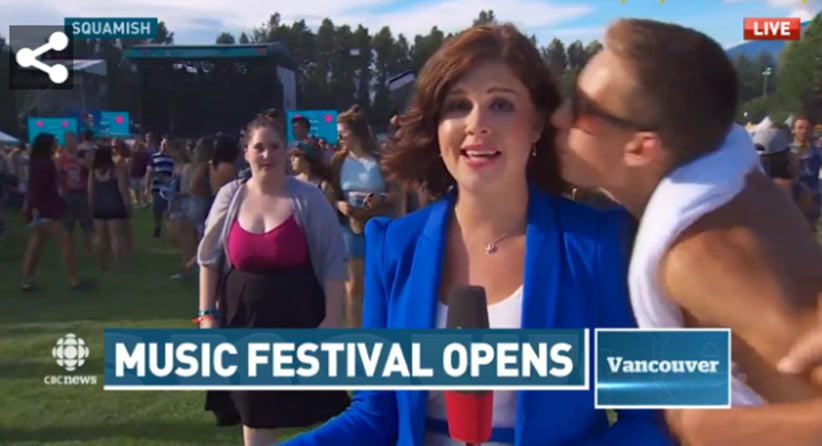 A screenshot of reporter Megan Batchelor receiving an unwanted kiss at a music festival while on camera. (CBC)

Last week CBC broadcaster Megan Batchelor was reporting live from the grounds of the Squamish Music Festival in British Columbia, when a shirtless teenage boy interrupted her broadcast—by planting a very hard, sloppy kiss on Batchelor’s cheek. The run-by Romeo, later revealed as 17-year-old Daniel Davies, fled the scene unaware that his behaviour would ignite a social media firestorm. Batchelor may have laughed off the kiss on the air—eager to put it at the back of her mind and finish her segment—but when the cameras stopped rolling, the anger set in. “I consider myself a professional,” she says, recalling the incident. “I care a lot about my performance and I felt angry that someone in a fleeting moment could totally ambush that.” This wasn’t the first time Batchelor was ambushed.

Like many of her colleagues, she’s been subjected to the notorious FHRITP prank—popularized online—in which mostly male passersby interrupt female broadcasters’ live hits by shouting into their microphones, “F–k her right in the p–sy.” (Awareness about the prank skyrocketed earlier this year when City News reporter Shauna Hunt confronted a group of men who conspired to shout the phrase at her; one of them was later fired from a high-paying job with Hydro One.) In fact, says Batchelor, she heard someone yell the phrase at her camera crew only a few hours before the forced smooching incident at the Squamish Music Festival.

Related: Why we should take FHRITP seriously

This is in part why she was in no mood to let the unwanted kiss slide—why, in the aftermath of the incident, she decided to file a complaint with the RCMP. “I was drawing a line in the sand. Too many of my colleagues have faced this,” she says. “By taking it a step further I was communicating that I don’t condone this. I think the outside authority [the RCMP] lends itself to that. Just tweeting it out, saying ‘this isn’t acceptable’ doesn’t get the conversation going as fast as doing something serious about it.”

Many have accused Batchelor of overreacting—of taking feminist political correctness to new and terrifying heights. After all, most of us don’t typically associate an unwanted kiss on the cheek—a popular weapon of choice among overzealous grandparents and great-aunts at family gatherings—with assault. But most of us aren’t forcibly kissed by sweaty teenagers on the job or routinely bombarded with unclever obscenities. If we were, I’d wager Batchelor’s reaction—a formal complaint—would not be judged as “outsized,” or “irrational,” but standard.

The truth may be that sometimes a swift, severe measure—not unlike permanently confiscating a toddler’s toy when he screams in a crowded restaurant—is necessary in curbing disruptive, idiotic behaviour. Batchelor does not believe that Davies—who has since apologized—is a violent criminal deserving of a lifetime of Internet shame (something she thinks he may be able to avoid on account of his young age and sincerity). “He was very remorseful,” she says. “I think he can bounce back.” But it isn’t a grave injustice that he be made to take a few punches along the way.

Some warnings about political correctness run rampant are warranted. It’s understandable, for example, that a person might not want to live in a world where trigger warnings decorate the book jackets of every novel in the Western canon—or where feminist theory is indistinguishable from the front page of The Onion. But I think we can adapt just fine to a world in which men who harass women on the job are—no matter their age or intentions—put firmly in their place.