The woman who coined the 'End of Men' 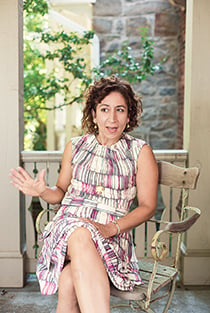 This article was originally published Sept. 19, 2012

Hanna Rosin, an award-winning American journalist, began investigating the developed world’s new socio-economic order in 2009, after the Great Recession hit the U.S. and the year female employment began to outstrip that of men. Rosin gathered the various strands of profound change—women dominating higher education and the fastest-growing economic sectors, the destruction of traditional middle-class marriage, and even women’s increasing aggression and violence—into her  book, The End of Men and the Rise of Women.

Q: More than one commentator has pointed out the apparently doom-laden symbolism of a woman chronicling the decline of men; “Like a man writing The Feminine Mystique,” noted one. What do you think?

A: Despite the title, the book is really more about the rise of women than the end of men. And maybe men don’t do that endless self-reflection and temperature-taking that women do. And they don’t do gender social movements all that enthusiastically either.

Q: It’s not news that the old physical economy with its traditionally male jobs is passing or that women are flourishing in the new one. What is news is the mounting evidence of the effects of those changes.

A: Exactly. And we know too that women do better in college then men—women reached parity there in the ’80s—but it took a generation before we started to really feel the effects. Now the next generation is getting ready to marry, and so you have male-female relations in the news. Early adulthood happens to be the time when women are doing unequivocally better than men. They have better prospects, they do better in school, they embrace opportunity, it’s easier for them to make more money before kids come into the picture. It’s also the moment when we make our big decisions about life. And we view each other in vastly different ways than we used to.

Q: Perhaps precisely because women think that relationships are important, young elite women are trying to avoid them, on the basis that they will limit their careers.

A: That is my point. We focus on the minute-to-minute of the hookup culture in college, but what we miss is the larger picture. Now it’s women who are avoiding getting entangled, an avoidance that’s really important to them in order to establish their careers. But it’s not that they want a world in which there’s no connection at all; they want a world in which they’re able to sort of dabble in relationships. In America, at least, the college-educated get married, and their marriages are stronger than ever, so the hookup culture has not killed marriage, not yet. We’re not where Europe is. And I don’t know Canada, though from my interviews with Canadians you seem to be moving more quickly than us toward a world like Europe’s. But Americans are not there: people who are college-educated having children together and not getting married. In America we love marriage, so we still all get married, except the non-college-educated: that’s where marriage is disappearing.

Q: So there is a large class element in this?

A: Class is a huge part of it, and I explicitly broke up my book into class chapters because I feel that this is largely misunderstood. People say “Marriage is ending.” Well, you know, like everything else—at least in America—marriage is a class privilege. Marriage is not ending for the college-educated classes, but for everybody else the consequences of female power is the end of marriage, the obsolescence of men. It’s men dropping out of civil society and not really getting to be part of the workforce, the church community or their own families. That’s like 70 per cent of America. That’s terrible. In fact, reading it made me very protectionist, I have to say. I suddenly started to think, like, “Why did we ship those jobs [abroad]? Perhaps we shouldn’t have done that. And for what, so cereal could be 20 cents cheaper?”

Q: You show women becoming more like men in everything from dodging romantic entanglements to cutthroat success on Wall Street, but men are not becoming more feminine. In fact, they seem to be becoming more childish.

A: I do feel like they’re a little bit stuck, but it’s not clear what the next male role models are. And I think some of that is pop culture’s fault. What do they have? Judd Apatow movies of guys who are sort of drifting and slightly childish and need the women to kind of tell them what to do? I actually think we’re moving out of that, starting to relax around these different role models. Which is not to say every man is going to become a nurse and every man is going to become a stay-at-home dad, but we can think in different ways about how to incorporate traditional manly virtues into this slightly feminized world we live in.

Q: As far as considering male-female outcomes in a nature vs. nurture way, you don’t think much of nature. The prevailing cultural narrative is more important?

A: I was having this same conversation yesterday about where we have visceral revulsions, and where we should have them. That flinch when one sees a man on a Tuesday afternoon in a playground taking care of his kids; the line in our head that goes, “What’s wrong with him?”—that needs to go away. But what about the man as protector? That’s been with us for a long, long time.

Q: For the 70 per cent of Americans without higher education, marriage is crumbling, with women increasingly willing to do without a spouse. Does marriage remain an ideal?

A: The most compelling research shows that women are in fact very idealistic about marriage. We have all internalized the idea that marriage should be a satisfying union of life partners and not a union of convenience. But women, more employed and employable and often better off financially, are setting the bar high, and the men aren’t meeting it. Single women’s incomes were [once] low, and married women’s incomes used to drop after divorce; now, increasingly, they rise, because women tend to work more after a divorce and they have more options than before. And they don’t have the men to support any more.

Q: You contrast declining violent male assaults on women (at least in some areas of the U.S.) with reports of increasing violence by women. How do the two connect?

A: I think the decline in assaults definitely has to do with female power, but not power in the literal physical sense, but economic independence, and the fact that women largely control the rights to housing and can kick men out in ways they couldn’t before. While domestic violence stats are very complicated, they show that, on paper at least, women are increasingly the aggressors. But that reluctance to see women as physical aggressors, and that chivalrous hesitation, still remain. But those early aggression studies from the ’60s and ’70s about women did not necessarily show them to be inherently less aggressive, just that women would block the natural consequences of those feelings, swallow their anger. Now because more women are getting arrested, because we see women on TV beating each other up, because all of our heroines lately are kick-ass . . . Like Katniss Everdeen from The Hunger Games. She is a classic aggressive male provider: unpleasant, self-sufficient, a total protector of her family. Those are all things that we associate with men—pioneer men, basically. Twenty years ago Katniss Everdeen would have been a bizarre and unacceptable character, and now she seems completely natural.

Q: The new matriarchy is not all roses for women or, especially, kids. Children with involved fathers are literally smarter.

A: For the non-college-educated, what’s not great is that women are doing absolutely everything, and that life is quite difficult for them. They’re raising children alone and going to school, so there’s some kind of power and independence. They don’t want to deal with men who can’t find work or stick in school, but there’s also a whole lot of hard life and exhaustion. Fatherlessness is especially bad for boys. Without them, over time you get mothers going to some kind of school, and their daughters following them, but not their sons. This is the inner-city American, African-American community, a matriarchy. We’ve seen it play out that way over the last 40 years, and people are predicting it will play out the same way in Latino and white communities. When work disappears, the fast-disappearing middle class follows.

Q: How is what’s happening to women economically playing out politically in America?

A: Almost every American family, conservative or not, is dependent on the ambition and economic power of women, so it’s a non-starter to even raise the subject of banning abortion or restricting access to contraception. I mean, that’s just silly. It is the most conservative states who have this male unemployment problem in spades, and where people are not getting married and women are raising children alone. Politically, you can see it in the fight over the single woman, who is one of the big demographics that both the Democrats and the Republicans are trying to appeal to, but the Republicans are doing it in a funny way. Women could never allow these restrictions to happen, not even conservative women, because they need to work, it’s just a fact. And it’s conservative women who really need to work.