My grandfather would have shot me: Book review 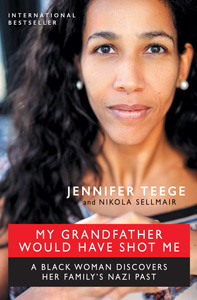 MY GRANDFATHER WOULD HAVE SHOT ME

When Teege, a German writer, was 38, a book changed her life forever. She was in a Hamburg library when she recognized a person on the cover of I Have to Love My Father, Right? That person, it turns out, was her biological mother, Monika Hertwig, maiden name Goeth. Teege, placed in foster care at age 3, had very early memories of her mother, but knew little about her lineage. What she discovered was horrifying: her mother was the daughter of notorious Nazi Amon Goeth and his mistress, Ruth Irene Kalder. Goeth, who served as commander of the Plaszow concentration camp in Poland, is portrayed by Ralph Fiennes in Schindler’s List; he is the powerful Nazi who shoots prisoners for sport. Compounding this terrible truth was the realization Teege might have faced death at the hands of her own grandfather: she is black. (Her father, with whom her mother had a brief affair, was born in Nigeria.) That day set in motion for Teege a long period of depression, soul-searching, and eventually self-discovery, all of which she has recounted in this memoir, a bestseller in Germany, just released in English.

Written with journalist Nikola Sellmair, the book is rich with early memories of Teege’s mother and her grandmother—a woman whom Teege recalls as kind and attentive but who (Teege later discovered) denied Goeth’s part in the Holocaust. “As a child,” she writes, “you cannot imagine that the person you love could have another side, a darker one.” Teege has lived in Israel. Much of the memoir is devoted to her difficulty reconciling her friendships with Jewish Israelis with the horrors committed by her grandfather. Now a mother of two, she is thoughtful and compassionate. Her message—that dark secrets shed their toxic power when we share them—is an important one. Yet despite the fascinating story from which it sprung, the book is a dull affair. Nazis are interesting, their guilt-stricken grandchildren less so. In the end, My Grandfather brings new and unintended meaning to the banality of evil.