Pumpkin-spice lattes? Uggs? You might be a ‘basic bitch’

Rather than feel ashamed for embracing mainstream culture, today’s basic bitch is proud of her willingness to conform 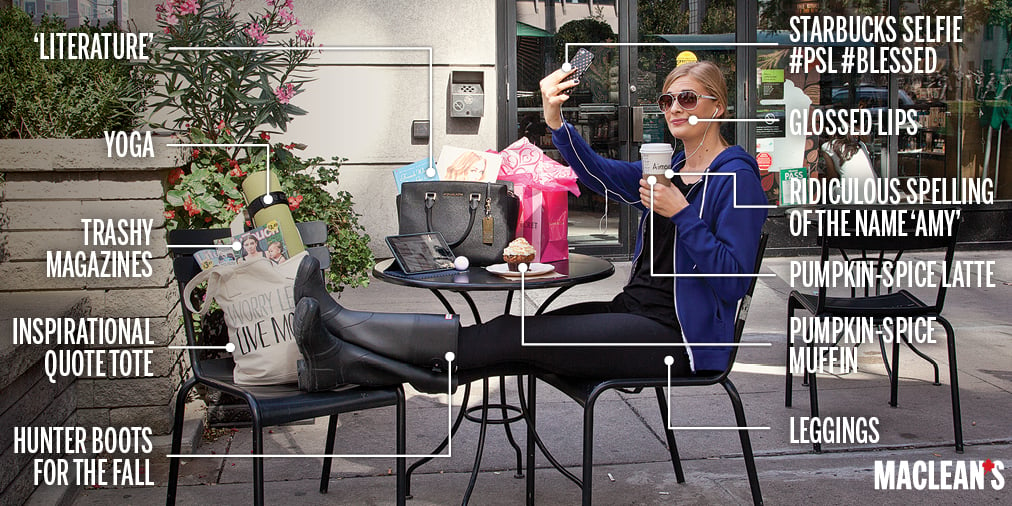 When I entered the ninth grade, after years of dressing like a boy, or, in the words of my mother, marching to the beat of my own drum, I decided to ditch my tomboyish persona for a more girly, trendy one. I had my eyebrows (which, when left unattended, grow into a single eyebrow) waxed and plucked until you had to squint to notice they were there. The year was 2003, ages before big-browed supermodel Cara Delevingne would tilt the eyebrow game in my favour. I purchased garish, pre-ripped hip-hugger jeans from Canadian fashion chain Le Château, and I started wearing Mac “lipglass,” a then-hugely popular lip gloss with a sheen visible from a mile away and the adhesiveness of superglue. (On a windy day, I looked like a scantily clad Cousin Itt, with my hair blown entirely into my face and stuck firmly to my frosted lips.) My style inspiration was every popular girl at my high school, all of whom seemed to take their fashion cues from Christina Aguilera in the music video for her 2002 hit Dirrty, the set of which is an underground wrestling ring in a dystopian universe where licking another person’s face is a greeting as customary as the French double-kiss. Trashy was in and I was into trashy.

In other words, I was what is known today as a “basic bitch,” the current catch-all phrase for a young woman who champions all things mainstream.

Things have changed since 2003. Today’s “basic bitch”—as she is referred to on pop news and lifestyle websites like BuzzFeed and Elite Daily—isn’t cut from the cheap, tacky cloth of Britney and Christina, but the bland, inoffensive one of Taylor Swift and Katy Perry. (In the words of rapper Lil Duval in 2010, “If you scared to fart or take a s–t in front of ur mans / knowin u been together a year or two / you a basic bitch.”)

Women—and men—whose identities are built from mainstream cultural markers have been around for centuries. But it’s only fairly recently, since the advent of Internet meme culture—ever concerned with labelling people, and women, in particular—that the average trend-obsessed North American girl has become known officially as a “basic bitch.” It’s hard to place the exact origin of the term, though some attribute it to hip hop. In 2011, American rapper Kreayshawn used the phrase in her song Gucci Gucci: “Gucci Gucci / Louis Louis / Fendi Fendi / Prada / Them basic bitches wear that s–t so I don’t even bother.” The term achieved widespread popularity online, however, after CollegeHumor released a satirical video in April called “How to tell if you’re a basic bitch,” about a woman who seeks medical attention for her alleged basicness. “I’m sorry, but the test was positive,” a doctor tells her gravely in the video. “You’re a basic bitch. You are into scented candles, you order your bagels scooped, and you own a picture frame that says ‘family’ on it.”

The basic bitch of 2014 is affluent, bubbly, and intellectually unremarkable. She wears Hunter rain boots in the fall and Ugg boots in the winter. She wishes her eyebrows were thicker, like Cara Delevingne’s; sometimes, on special occasions, she pencils them in that way. She loves pumpkin-spice lattes from Starbucks, EOS lip gloss and The Bachelor. She reads—but only on the beach. She is on all social media platforms and photographs every meal she takes. She loves the TV show Scandal, but doesn’t “get” House of Cards. She believes “everything happens for a reason.” She is also, confusingly, sardonic.

The salient difference between the basic bitch of my adolescence and today’s basic bitch is a sense of self-deprecating pride. I was ashamed of my unabashed embrace of superficial mainstream culture when my friends called me out on it in high school. But today’s basic bitch is uniquely proud of her willingness to conform. I can’t go a day now without seeing, on Facebook, some kind of congratulatory post made from one basic bitch to another, in the form of a Buzzfeed quiz—“How Basic are you?”—or a self-mocking status update about the joys of pumpkin-spice lattes. Which is to say that basic bitches, once the butt of a sexist joke about vapid, superficial women, are now its authors. Thanks to the self-referential nature of Internet culture, irony is no longer an outsider’s weapon; it’s for everyone.