Tim Flannery on climate change and what Canada can do

An interview with Tim Flannery, best-selling author and former head of the Australia Climate Commission, on carbon, coal, and the U.N. conference in Paris 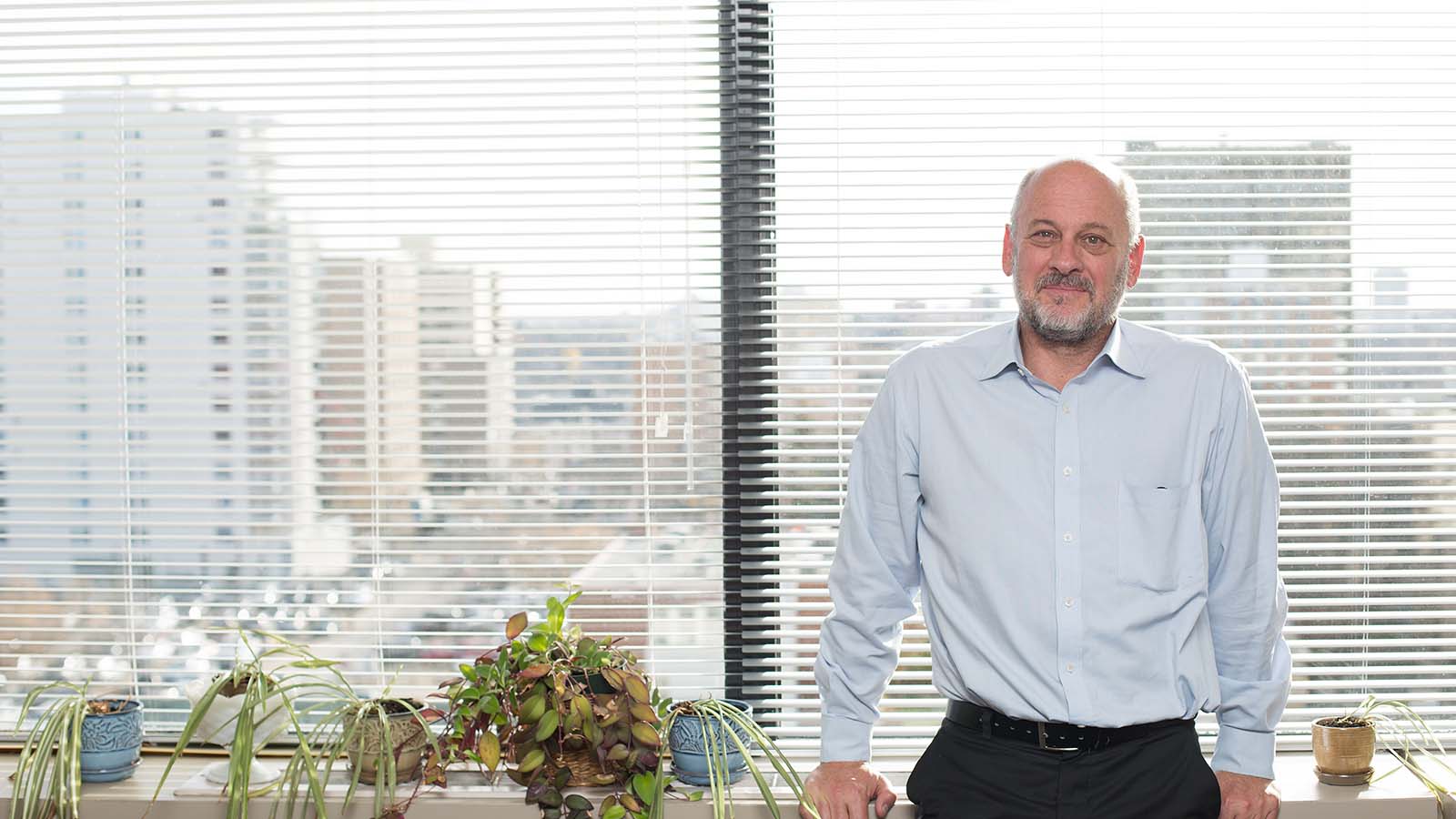 Tim Flannery is quite sure humanity can no longer change course fast enough to prevent warming the Earth’s climate by two degrees Celsius. Yet the scientist, activist and former head of the Australia Climate Commission has called his new book Atmosphere of Hope. Ahead of December’s international climate change conference in Paris, he sees glimmers of progress amid the gloom, and puts faith in what he calls “third way” technologies to save the planet—including an idea to suck from the air the carbon we pumped into it, and stuff it beneath the ocean bed. Maclean’s spoke to the author of the seminal book The Weather Makers while he was in Edmonton to consult with the NDP government.

Q: Ahead of major potential turning points in the climate change saga, it’s useful to take stock. It’s perhaps the old Jon Stewart question: How screwed are we as a planet?

A: We’re committed to getting to 1.5 degrees (Celsius) of warming, just by the gas that’s already in the air, so we’ve had a decade of a worst-case-scenario emissions trajectory. We’re now tracking the worst case imaginable.

Q: After Kyoto and Copenhagen, after all these attempts, we’re on a worst-case trajectory?

A: To give you an idea of how bad that might be, Australia’s Great Barrier Reef will be dead at 1.5 degrees of warming, according to the scientists who study such things. It would be next to impossible to pull short of two degrees of warming. The Paris meeting looks like it may change our trajectory from heading toward four degrees of warming by 2100, to closer to 2.7 degrees, so that would be an improvement, but still way, way not enough.

Q: Over the years, you were critical of Stephen Harper, and you were an honorary pallbearer at Jack Layton’s funeral. The NDP during this campaign criticized the Liberals and Justin Trudeau for not setting its own targets, preferring first to consult with the provinces. What would be your advice to him?

A: In Canada, the provinces are responsible for energy policy, and they have most of the levers of power. So, as a national government, you don’t want to be committing to things that would be unfeasible or you just would impose on others. I guess what we’ve learned is that the bottom-up approach, while it takes more time and results in less ambition than necessary, at least gets something done. It would be lovely to set a target. In a perfect world, that would be the way to do it, but we don’t live in a perfect world.

Q: An article in Foreign Policy before our election said it could matter a great deal that both Canada and Australia send to Paris prime ministers who are more serious about tackling climate change than were Stephen Harper and Tony Abbott. Can new Australian Prime Minister Malcolm Turnbull and Trudeau have a meaningful impact on talks in Paris?

A: Absolutely. Australia is the 13th-largest polluter overall, so we are one of the heavy hitters, and Canada’s right up there, as well. It’s hugely important that Canada and Australia play a constructive role in this. The danger was that one or both would play a very negative role, and lead a coalition of the unwilling that would make it that much more difficult to get things done.

Q: You’re talking to the Alberta government, and they’re obviously a more progressive regime than the past one. But they have been stout proponents of oil sands development. Quite a few say, as one might in Texas: Dance with the one who brung ya. You write in your book that three-quarters of the oil sands must stay in the ground. How far can they go with sustainable development of the oil sands?

A: The argument I made when I was here three years ago, to the old government, was that, in Australia, we have seen a collapse in the coal price. It wasn’t at the supply end; it was demand that was dying. And this was in the early days of the Chinese shift to clean tech, and away from fossil fuels. Oil is in a very similar position. Experts in the marketplace think they’re both about half responsible for the current price. Supply is going to fluctuate: If there’s a revolution in Saudi Arabia, the oil price is going to go up for a bit, but the overall medium-term trajectory has to be driven down by that demand equation. If you’re looking at a future for the tar sands, [ask]: Are you a low-cost producer? No. Are you a carbon-intensive producer? Yes. Is there likely to be some consequences to that, given the Paris meeting? Yes.

I’m going to say to this government, as well: Whatever you do and whatever you say about oil, there are larger forces at work here that suggest to me that a responsible government should be hedging its bets. Start putting programs in place to diversify the provincial economy. Don’t do what every other government here has done in times of low oil prices, which is to mouth some platitudes, start some process, then abandon it once oil prices creep back up again.

Q: Your book advocates the use of carbon capture and storage, but not the sort of initiative the Alberta government had put billions of dollars into: the geo-sequestration from coal or energy plants.

A: With that, you’re only doing something that prolongs, or attempts to prolong, the life of oil and gas and coal.

Q: You propose a different type of carbon sequestration in the ocean, which would be a much, much larger operation. How would a government like Canada even begin to go about that?

A: Those studies are at desktop stage only at the moment. That would involve everything from the study of the ocean bed and its chemistry to the technology required to get the stuff down two or three kilometres, and the costs involved in that, and what the source is. And one of the sources I talk about in the book is seaweed farming [a potential carbon sink]. There is a [decades-long] pathway to being able to unlock that resource at scale. That’s just what we saw with wind and solar. For 30 or 40 years, people have been investing in wind and solar and [those sources have] remained massively highly priced. It’s only after 40 years that it’s become cost-competitive.

Q: Along with carbon capture, you explore what used to seem like science fiction. Now we see groups such as Carbon Engineering in the very early stages of removing carbon from the atmosphere. How much of our climate strategy is it worth staking on such long-term ideas?

A: What are the alternatives? I would ask. It’s at the early demonstration stage. The costs look as though they’re going to be around $2,500 a tonne, but wind was comparably expensive 30 years ago. I don’t think we can cut emissions fast enough to avoid two degrees of warming. You’d need a revolution in the way things are done: You’d need to walk away from the tar sands, walk away from Australia’s coal today, lots of other things. I don’t think that’s going to happen, realistically. The only way we can stay within that two-degree guard rail is to start developing some of these technologies that start drawing CO2 out of the air, at scale.

Q: What are the big potential emission reductions for Canada?

A: Here in Alberta, you’ve got a 55 per cent dependency on coal. To phase that out and go to clean energy sources would be a huge benefit in multiple ways. The proposal for natural gas here in Alberta is, I think, very dangerous. What they’re in fact suggesting is that you would source electricity from your cogeneration in the Alberta tar sands. So what you’re then doing is linking a fossil fuel industry, which is in trouble, to your certainty of electricity supply. And that is mad, quite frankly.

Q: When other means are put forward, they often get pushback in Alberta. If not natural gas, of which Alberta has an oversupply at these prices, what then?

A: You’ve already got 35 per cent gas in the mix, and 55 per cent coal, so you need to diversify. What are the options? There’s hydro, but large-scale projects are very expensive. There is wind and solar, and wind and solar have the great advantage of being incremental; they’re modular. I’m looking here in Edmonton, I can’t see a single solar panel on any rooftop. In Australia, there are 1.4 million solar panels on rooftops of houses. So 20 per cent of Australians now generate their own power through solar [photovoltaic cells]. Second, wind power: You’ve got 5,000 megawatts of very good resource here in this province, which is instantly accessible. You don’t need great interconnectors to link it all up, and wind is really cost-competitive at the moment. You don’t need to spend a billion dollars to put in wind; you do it in a modular way.

Q: Twenty per cent of homes are going solar in Australia, and that would have developed under Tony Abbott, who has a reputation like Harper’s. That suggests movement by the public to push things forward there.

A: It’s not people who care for the environment, or anything else. People who are putting this stuff in are mostly pensioners and people on fixed income, or people with big mortgages. They’re the ones who are putting in rooftop solar, because it allows them to control the size of their electricity bill.