Some foie gras before you fly?

Toronto’s airport now has restaurants by the city’s top chefs. But the maestros are nowhere to be found. 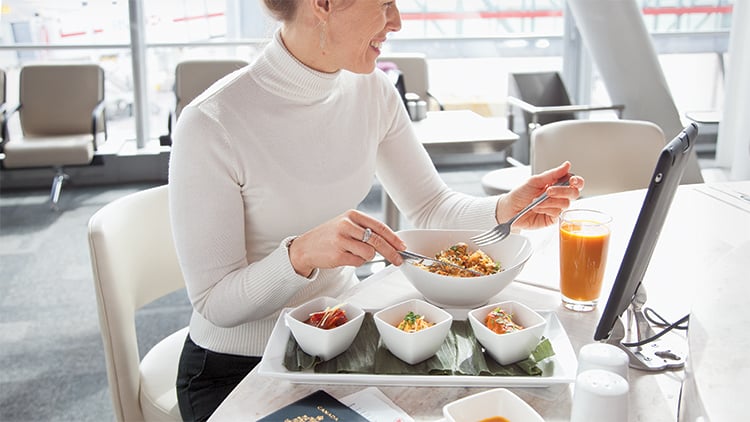 The much-touted latest round of the remodelling of food and retail operations at Pearson International Airport, Canada’s busiest, is at last in full swing and providing dividends. Nowadays, when bad weather and incompetence combine forces to grant travellers a few bonus hours behind the security checkpoint, and we get hungry, the feeling no longer comes accompanied by abject panic. Instead, for the first time here, one may confront the culinary possibilities with calm resignation—and even mild curiosity.

At Terminal One, for example, you might sensibly drop in on Marathi, an Indian restaurant with a menu created by Hemant Bhagwani, who gave Toronto its justifiably popular Amaya: Indian Room. Or you could sample a pizza or pasta at Boccone, by Massimo Capra, of the city’s venerable Mistura, or perhaps a panini at Fetta, conceived by Mark McEwan.

And while dubious aromas still waft from A&W and Subway, take note that the dingy Molson Pub is scheduled to make way for a new concept from television chef Lynn Crawford—who used to cook for real at the Four Seasons Hotel in NYC. Similarly, Casey’s Bar and Grill will be packing up its sticky deep fryers to make space for Twist, by another food television star, Roger Mooking. Then comes Asian Kitchen by Susur Lee.

Which is all to say that, in the unlikely event that Joe Biden had to make an unexpected landing here, Torontonians could relax. Yes, the vice-president could well make a bad crack about having crash-landed on a Food Network soundstage—but he would surely not compare our fine airport unfavourably to those of the Third World, as he did last month of LaGuardia.

But then, Toronto is aiming higher than that corresponding slice of New York (and reasonably, for once). The stated ambition of the Greater Toronto Airport Authority is to make Pearson the leading international airport in North America, with a food and beverage program “to rival [that of] any airport in the world.”

With a view to that, consider for a moment another international airport currently undergoing improvement: Heathrow. Come June, Star Alliance carriers such as Air Canada will be based there at the all-new Terminal Two. Among other culinary offerings, T2 will feature a new restaurant from Heston Blumenthal, of the internationally renowned The Fat Duck, and Dinner. Blumenthal’s new 130-seat venture will focus on British cuisine, as well as select international favourites finessed by his research in the BBC show In Search of Perfection. These include hamburgers of scientifically ideal proportion and pizzas cooked 90 seconds flat in a Neapolitan wood-burning oven—an airport first, allowed only by dint of its elaborate safety systems.

Airport regulations usually block such initiatives. Heathrow still disallows gas—so, over in Terminal Five, when Gordon Ramsay opened Plane Food in 2008, he had, for the first time, to coach a kitchen team to cook with induction. Other unfamiliar problems included a random flow of customers whose desires for lunch, drinks or dinner had no logical connection to the local clock—and a supply route that would move so slowly through distant loading docks and security scanners that it was useless for stemming a sudden run on eggs or Chantenay carrots.

All the same, Plane Food makes for a reliable pre-flight stop for a steamed fillet of sea bass in shellfish sauce, with a good glass of white Burgundy on the side. If not that, there’s the bar at Caviar House & Prunier for champers, caviar and blinis—and a takeout sandwich of smoked Scottish salmon. You can also go cheap, and stop at Eat for a $7 sandwich of crayfish, aioli and arugula.

The disposable income of their relatively wealthy passengers is a factor. All those oil-rich Arabs looking to unload those encumbering wads of cash from their VAT refunds before hopping the flight home to Dubai certainly do their bit for the bottom line. Of course, at Heathrow, they also have something to buy (as in Harrods, Hackett, Zegna and Dior—vs. Tie Rack and Sunglass Hut). But on the culinary front, the comparison should be much closer. On paper, anyway, there is no reason why restaurants by Toronto celebrity chefs at Toronto’s airport should be any less of a draw than restaurants from London’s celebrity chefs at their airport.

Except that there is one big difference, after all. While at Heathrow, Ramsay and Blumenthal own, run and staff the restaurants that bear their names, presumably with the same attention to detail that earned them their Michelin stars, our gang at Pearson simply leased their names and sold consulting fees to a group of airport-concession operators, many of which were responsible for the horror show that was there last year and the year before.

For example, when Casey’s gets rebranded as Lynn Crawford’s, and the Molson Pub becomes Twist, their food and management will still all be provided by the identical operator—Host International—that will then apply its gifted hand to the recipes of Susur Lee. Select Service Partner, which runs the various Tim Hortons in T1, also manages operations at Massimo Capra’s place, Boccone. And then there is newcomer On the Go (OTG), which runs more than 150 restaurants in airports across the U.S., and is now preparing all the food at Mark McEwan’s Nobel Burger Bar, as well as Fetta, Marathi, the Heirloom Bakery Café, and even Acer, by the Rubino brothers (with the exception of the sandwiches at these chefs’ respective grab-and-go counters—which are made at McEwan Foods in Don Mills, early in the morning, many hours before you get the chance to sink your teeth into them).

The good news is that all the operators are trying hard. Even better news at OTG is that they cook far better than they translate menus on their 20-language iPad ordering system—which, for example, at Marathi, translates “plain naan” into French as “plaine naan” (seriously) and, at Nobel Burger, translates chicken “drumettes” into “Poulet Pilon,” which is gibberish. Meanwhile, the oyster-mushroom-topped Bymark burgers do not come with pleurote, as such mushrooms are called, but with huitre champignon. As in “oyster, mushroom.”

But some of the cooking is surprisingly decent. At Boccone, for example, their beet salad with ricotta salata is a very good snack on the fly, and the spaghetti with shrimp will do if you like your zucchini soft and your garlic assertive. Do not have their folded, scrambled eggs and bacon pizza scaccia, whose aftertaste can repeat itself—in my case, all the way to Vancouver. By all means, do have one of their regular pizzas—although I would venture that the pizza is better yet in Terminal Three at Corso, where the recipes come from Max Rimaldi, of wood-oven-only Libretto, but turn out surprisingly well in local gas-fired equipment.

Then there’s Marathi, possibly the best offering of the lot. There, avoid the doughy naan but do avail yourself of the butter chicken, or the shrimp vindaloo, or any of the other fragrant curries. The McEwan-inspired burgers at Nobel have lots of flavour and are made of good-quality beef. And they come with good, hand-cut fries. But note that the legislated minimal doneness for meat here is a scorching, grey, 60° C, which appeals to no one I know, save for the Toronto chief medical officer. At Acer, the Rubino brothers are still preoccupied, after all these years, with pan-Asian fusion of noisy results: The spicy pork broth served with the ramen was quite good—a reminder that, now and then, there can be a positive side to keeping the TV chef out of his kitchen.

The single biggest draw for me is the wine bar Apropos, with its excellent list of wines by the glass selected by Toronto-based master sommelier John Szabo. They are priced from the low to high teens, just like the myriad new curries, burgers and sandwiches the GTAA is pushing our way, hoping to entice travellers to part ways more willingly with their cash. Some of us had, reasonably, expected better. But then, as we are discussing Pearson, you could say that a mixed bag is still better than a lost one.