Shannon Proudfoot: How does it feel being reduced to a mere audience member—one face in a gaping sea—staring up at a scene from your own life? 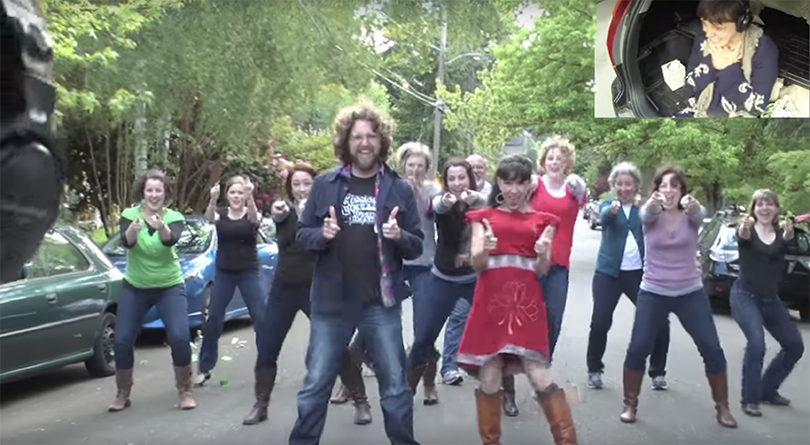 A few years ago when I was writing for Sportsnet magazine, this video made the rounds at the office. You might not expect a bunch of desk-jocks to swoon over a grand romantic gesture, but you would be wrong. My colleagues adored it: the Disney-parade spectacle, the unfolding surprise, the crescendo with several dozen somehow-willing accomplices jazz-handsing their way around a young hipster who says yes to, I don’t know, a ring woven out of the beard hairs of her beloved by birds and mice trained in the manner of the dress-making crew in Cinderella?

I alone did not like the video. I loathed it. And when I told my co-workers, they reacted like I’d announced that I hated love itself and also musical theatre. Which, let me tell you, is extremely not the case.

It is in fact because I love love—along with decent production values and artistic restraint—that I hate that video, and the seemingly escalating number of public stunt marriage proposals to which we are now subjected. Word of these abominations inevitably reaches me when people tag me in tweets about them, for this is the hill upon which I have chosen to die a noble and cranky death.

READ: It’s time to break up with the romantic comedy

At its most benign and well-intentioned, turning a proposal into a public stunt seems immature and misguided. At its worst, it reeks of narcissism and manipulation: “Everybody look at meeeeee! And who would say no with all these people watching?”

I think about it in terms of intention and audience.

What is the goal of a modern marriage proposal? To tell one person that you enjoy their company more than anyone else’s, and that you would like to form a team with them, just the two of you sailing a big, bewildering world together, having sleepover parties forever.

And for whom do you stage a proposal? It is inherently an audience of one. The entire point of the exercise is that it’s about just two people and the private bond they share—a connection glimpsed by the rest of the world, but never fully understood from the outside.

Now, what is the point of a public stunt? To stage a show. To draw eyeballs, attention and accolades from hundreds of random strangers—maybe tens of thousands, if Ellen DeGeneres sees your video or something. You want to be applauded like a busker, only you’re not juggling flaming torches for sweaty tourists who will slink off without putting money in your weird hat, you’re flogging an enormous moment in your own life—and in the life of someone you purport to care deeply about.

And who is the audience for a stunt like that? Sure, the person you ask to marry you is there in the front row, but are they really the curtain call you’re chasing? And how do they feel being reduced to a mere audience member—one face in a gaping sea—staring up at a scene from their own life, instead of being a participant in it?

Remember when China’s He Zi won a silver medal in the three-metre springboard in Rio, capping years of grueling training and fragile dreams of Olympic glory? No? Hmmm, weird. Well, do you remember when her boyfriend rushed the podium seconds after she received her medal and dropped to one knee, ring in tow? Ah, there it is.

“I didn’t know he would propose today,” she told reporters afterward. “And I didn’t expect myself to marry myself out so early.” Wow, she sounded pretty stoked, didn’t she? No doubt she was on the very same page as him about getting married. And how could she have been anything but thrilled to have a major professional accomplishment hijacked by her own personal tone-deaf romance bozo?

There’s also a much darker possibility in these gestures suggested in this recent story about a failed video game proposal dubbed (by the guy who set it in motion, which is telling) “the world’s saddest Easter egg.” Once someone thought to ask for the woman’s side of the story, she painted a picture of a deeply miserable relationship she’d long wanted to escape.

Of course, most public stunt marriage proposals are probably well-intentioned and not coercive, but there’s still something cluelessly narcissistic about them that undercuts the supposed romance.

Years ago, before “crowdfunding” was a thing, I interviewed a guy who was anonymously soliciting donations to buy Super Bowl ad time to propose to his girlfriend. I remember him being quite likeable and self-effacing. I asked why he was doing this: was his girlfriend a huge football fan? She was not. Did she like dramatic gestures? Not really. Was she someone who enjoyed being the centre of attention? Nope, he said, she’s pretty shy.

Way too often, that’s what public stunt marriage proposals look like: someone gets jacked up about the idea of staging a stunt, gets carried away thinking about how stunt-errific it will be, and completely forgets about the proposal and the person who’s supposed to be at the centre of it all.

READ: Watch ‘The Notebook,’ save your marriage

We have already become frighteningly meta as a society. We think about the photo we’ll post on Facebook to commemorate an event instead of just living the moment while it’s ours, or we mentally draft the tweet we’ll post to announce “some personal news” the moment they offer us the job.

But we have reached another level of bleak emptiness when we start engineering moments of our lives—moments that really, really matter—to maximize the applause or clicks we might get from strangers we shouldn’t give a damn about, instead of thinking only about the one person we do.

And the rest of us—well, frankly, the rest of you, because ever since I outed myself to my horrified Sporsnet colleagues, I will have none of this crap—are reinforcing this urge every time we share one of these things and help it go viral.

So don’t do it. Just like you might make a deal with your friends to pile your phones in the middle of the table and ignore them when you go out for a meal, maybe if we stop larding attention on these public stunt proposals, they’ll die off and we can all live slightly more real lives. If you’re at a sporting event and one of these things goes down, embrace your inner Philadelphia fan and boo like you’ve just seen Santa Claus. 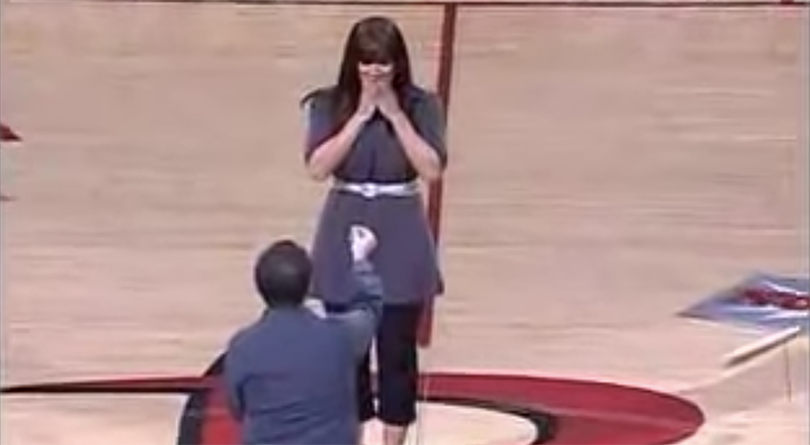 And if you are on the receiving end of one of these grotesque spectacles, I implore you: Be like this badass. Say no. Walk away. If you really like the person and want to marry them anyway (Are you absolutely sure?), lean down and tell them quietly that you will discuss this later in private. I guarantee you no one who was present at that basketball game ever attempted a public stunt proposal after that. I mean, even the mascot was depressed. It is stupendous.

What the world needs now is love, real love. And that means more crestfallen mascots. Let’s make this happen together, people.