The future of giving 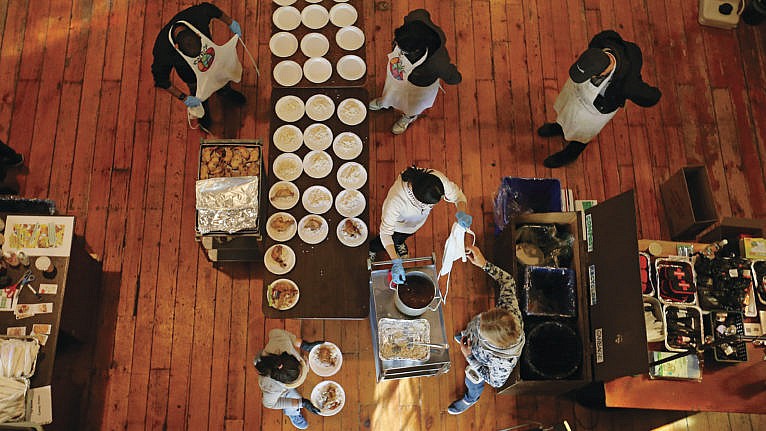 When Chantal Chartrand started a GoFundMe campaign to raise money for Joyce Echaquan’s husband and seven children, she imagined she might collect $10,000 to help them pay for the funeral. Chartrand, who is friends with Echaquan’s cousin, set up the online fundraiser to supplement money she and her mother collected at a vigil following the 37-year-old’s death, where supporters stuffed cash into a jar.

Moved by the plight of Echaquan’s children and by her heart-wrenching Facebook Live video, where she streamed hospital staff insulting her with anti-Indigenous taunts, donations poured in from across Canada and around the world, totalling more than $328,000 as of mid-November. Echaquan, who had a history of heart problems, died shortly after checking herself into a hospital in Joliette, Que., for stomach pains in late September, with her family saying she may have had an adverse reaction to morphine.

Media coverage spread awareness of the GoFundMe far beyond Echaquan’s Manawan community of the Atikamekw Nation. Chartrand says people saw the video as undeniable evidence of systemic racism, inspiring them to take action.

“I wasn’t expecting it would be this big. It was worldwide, people made donations everywhere,” Chartrand says. “It’s showing them support. Children deserve to be raised in a world where we don’t have racism.”

Echaquan’s death is just one of many examples of systemic racism and structural inequalities being made suddenly, glaringly visible in 2020. As demonstrated by the success of Chartrand’s GoFundMe campaign, people are increasingly using the power of giving to shift resources toward those on the other side.

From an office worker donating $20 to a bail fund to help activists arrested for protesting anti-Black racism to a multi-million-dollar family foundation shifting a significant percentage of its dispersion to food banks, Canada’s big, brand-name charities are being bypassed in favour of more targeted donations. This has implications for the future of philanthropy, which is becoming more grassroots, direct and focused on social justice.

“One of the beautiful things about COVID is that it’s a reckoning,” says Kate Bahen, managing director of the charity research organization Charity Intelligence. “We’re seeing a massive refocus.”

An example: the US$1.7 billion in donations to anti-racism organizations and other social justice causes announced by MacKenzie Scott, Amazon chief executive Jeff Bezos’s ex-wife, in July. Following protests of the police killing of George Floyd in May, major corporations like Apple and Walmart announced millions of dollars in funding for racial equity organizations and initiatives.

Bahen says many wealthy Canadian individuals and corporations are redirecting their giving in a similar way, inspired by the pandemic. She says she’s hearing from donors who are pulling funding away from symphonies, orchestras and hospital foundations and toward organizations that respond to acute, immediate needs.

“It’s really pivoting back to basics,” Bahen says. “I am seeing major donors, foundations and individuals, pivot from giving to hospital foundations to food banks.”

READ: Some Canadians are turning to their yards to grow their food during the COVID-19 pandemic

Some donors are cutting out the middleman entirely, bypassing charities in favour of methods of direct giving such as GoFundMe campaigns, bail funds and mutual aid groups, where neighbours organizing online match those who need groceries, medication, child care and money with those in a position to help. Mutual aid groups are typically non-hierarchical, member-led and open, with a common slogan being “solidarity, not charity.”

Caroline Shenaz Hossein, a professor at York University who studies mutual aid and non-profits, points out this is hardly a new idea. Black women and other marginalized people have a long history of organizing various forms of mutual aid to help each other survive. Hossein has interviewed hundreds of “banker ladies,” Black women in Canada and the Caribbean who get together to pool money and take turns handing it out to each other.

These women often hide what they’re doing out of fear police will confiscate the money they’ve collected and use it as evidence of nefarious activities, Hossein says. As more and more white, wealthy people embrace the idea of mutual aid as an effective way to help people in need, Hossein says she hopes marginalized people will be able to move the practice out of the shadows.

“We’re starting to see the value of what grassroots, community-based, informal kinds of giving can look like,” she says. “What I’m hoping is the stain of informality is no longer going to be such a barrier.”

Institutions, professionals and wealthy donors are also increasingly seeing the value of small, community-based non-profits that work directly with poor and racialized people hit hard by the pandemic. Microcrédit Montréal, which offers loans and support to marginalized people who want to start businesses, recently received $400,000 in funding from the City of Montreal, with the Montreal-based Mirella and Lino Saputo Foundation guaranteeing loans. Indu Krishnamurthy, executive director of Microcrédit Montréal, says her organization was underfunded for years because most of the people she works with plan to go into business for themselves, which means funders couldn’t boast they were helping create jobs.

“It seems almost cynical that it took COVID-19 to gain the recognition of our work,” Krishnamurthy says. “But I’m happy.”

Sunder Singh, executive director of the Elspeth Heyworth Centre for Women, which provides employment, housing and domestic violence services to women in Toronto’s northwest (an area where impoverished and racialized residents have been hit particularly hard by COVID-19), says she’s received a lot of new interest from people she doesn’t normally hear from. Lawyers have been offering pro bono help and she’s putting together an advisory committee of professionals interested in mentoring her clients.

“We will bring them on board, absolutely,” Singh says. “We will take full advantage.”

Other charities with different focuses are experiencing a significant decline in donations. A May report by charity advocacy organization Imagine Canada found more than two-thirds of charities have seen their revenues decline since lockdown began, dropping by an average of 31 per cent. The WE Charity scandal, which saw the high-profile organization wind down its Canadian operations following controversy over a federal contract to manage a $912-million student volunteering program, raised questions about charity governance and accountability at a time when donations were already down.

Samantha Nutt, founder of the international development charity War Child Canada, says many organizations in the sector are struggling badly. The charitable sector accounts for about 8.5 per cent of Canada’s gross domestic product and employs about 1.4 million people, which means major changes in giving patterns will have profound implications for the people charities help, the staff they employ and the economy. Nutt says she understands why donors are currently focused on anti-racism and the immediate needs of people struggling to get by in the pandemic, but hopes they remember to support charities focused on other problems as well.

Chartrand, who organized the GoFundMe for Joyce Echaquan, says she personally believes in the power of giving to people directly, without a charity acting as an intermediary. It’s something her family raised her to do and something people in her community have always done in times like these. As people in positions of privilege embrace the idea, they do more than just provide financial help, she says.

“Racism, we’re all concerned about that. So many times we see situations and we don’t say a word, or we don’t think it’s happening, or we’re exaggerating,” Chartrand says. Her GoFundMe can’t change what happened to Echaquan, “but it’s a way for people to show their support, to say, ‘We’re sorry that this is happening.’ ”