The rise of millennial, urban-dwelling birders 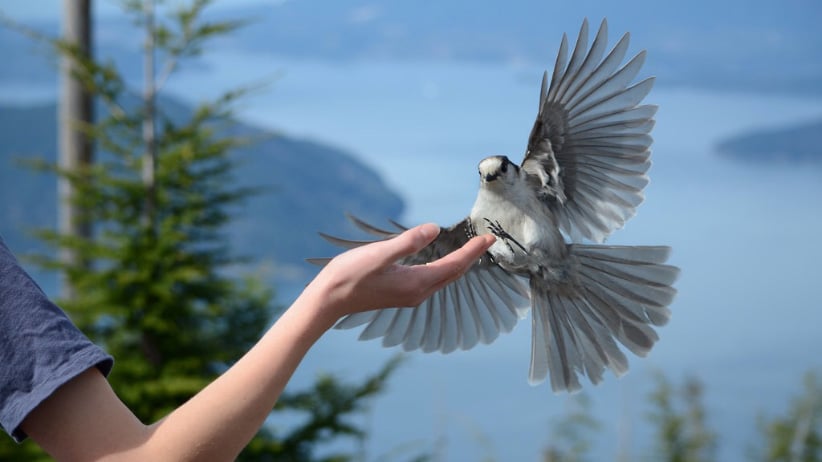 Ian Harland, a 16-year-old birding enthusiast, snapped this Gray Jay flying into the hand of his brother on a trail near Vancouver (Ian Harland)

It was evening on a Thursday and Nolan Pelland, a 22-year-old health food store manager, was waking from a power nap after a long day. Bleary-eyed, he instinctively reached for his phone to check his email, when the ping of a text message roused him to full consciousness. The rare, tricoloured heron had been spotted at a park near his house in east Toronto, and the online birding community was in a frenzy. “I don’t think I ever ran so fast,” says Pelland. “I had to go and see this thing.”

A five-minute bike ride later, Pelland was on the scene with a crowd of keen birders already on his heels. The slender, curvy-necked coastal bird with a long yellow bill and grey-blue and purple plumage looked out of place in the foreground of the Toronto skyline. And indeed it was. The heron is common in the tropics and southern U.S., but nowhere in Canada. “That was a life bird for me,” says Pelland, still beaming from the moment five days later. “It was very nice.”

Pelland himself is among an increasingly common species across Canada: birders (not to be confused with the more passive bird watchers) who are young, often urban and far more diverse than the older generation. Droves of 20- and 30-somethings are taking up the sport, once reserved for upper-middle class, white retirees. With the ubiquity of online social networks and affordable digital SLR cameras, birding is becoming visible, accessible and strangely appealing to millennials, who are flocking to wooded areas and wetlands to catch glimpses of avian life. Condé Nast magazine deemed urban birding one of the hottest trends of 2017, and the rising popularity is reflected in Hollywood films like The Big Year, starring Jack Black, Owen Wilson and Steve Martin, who compete to tally up the most birds in North America in a single year, and the 2014 coming-of-age movie A Birder’s Guide to Everything (in one article for Esquire, Stephen Marche, a birder himself, noted the presence of fist-bumping “birder bros” crushing beers in the Florida Keys while comparing the lengths of their birding lists).

To an outsider, the notion of young people electing to rise at dawn to meander around a park or forest and count feathered fauna is perplexing. The words boring, aimless, intensely nerdy, or odd may come to mind, and most birders won’t contest those optics. They will, however, add that it’s peaceful and competitive, and exciting in a way that any hobby taken seriously is. “It’s rare to get some time alone,” says Gavin Platt, a 36-year-old Toronto-based mechanical engineer who started birding with his dad as a kid in London, Ont. “It’s nice to be able to go to the [Toronto] islands at 6 a.m. in late October and have the whole thing to myself.” But for most birders, the object of the sport is growing their checklists: their life list, year list, country, province or city list. Every new bird spotted and added to the catalogue is a small victory and its own reward, like a real-life Pokemon Go mission.

Platt, who has seen roughly 1,600 bird species in his lifetime and roughly two-thirds of all 426 Canadian bird species, insists he’s not that competitive about birding (though other young birders in the city consider him something of a local legend for having seen so many birds at his age). He doesn’t, for instance, do “Big Years,” the year-long tournaments to spot the most birds possible in a given geographic area. Anyone who’s seriously taken up the challenge will tell you it’s no small feat. Melissa Hafting, a millennial birder who runs the British Columbia Rare Birds Alert website, placed second in the Vancouver Big Year in 2015. “That was such hard work,” says Hafting who went birding every single day that year. By the end of it, she recorded 258 species, two fewer than the person who saw the most. Russell Cannings, a fellow millennial birder who, at 23, set the provincial record—a whopping 373 species spotted in one year—has gone as far as helicopter into remote areas to see the endangered birds.

RELATED: How a stressed woman found solace through looking at birds

The rise of millennial birders has followed the advent of online databases that keep track of birders’ checklists and rank users against each other, which some of the “oldtimers” are reluctant to use, says Pelland. The most popular platform is eBird, which every young birder I spoke with uses. The system gamifies the hobby in a way that speaks to young adults and teens more than it would perhaps to boomer birders. “It’s becoming a cool thing to do,” says Hafting, which wasn’t the case when she was growing up. The only birder on the block, she was dubbed the girl with the geeky hobby.

Now, Hafting leads a group of 25 young people, 12 to 18 years old, on birding field trips all over the province. She started the program, B.C. Young Birders, in 2014, hoping the kids would get hooked on birding and conservation now, and keep at it through adulthood. As much as eBird, cameras, and Instagram accounts resonate with young birders, Hafting says part of what’s feeding their participation is this concerted effort by older birders to get kids and young adults involved. “They realize that these young birders are the future,” she says. “With climate change and habitat loss, we need to include them because they’re going to be the ones to solve these problems.”