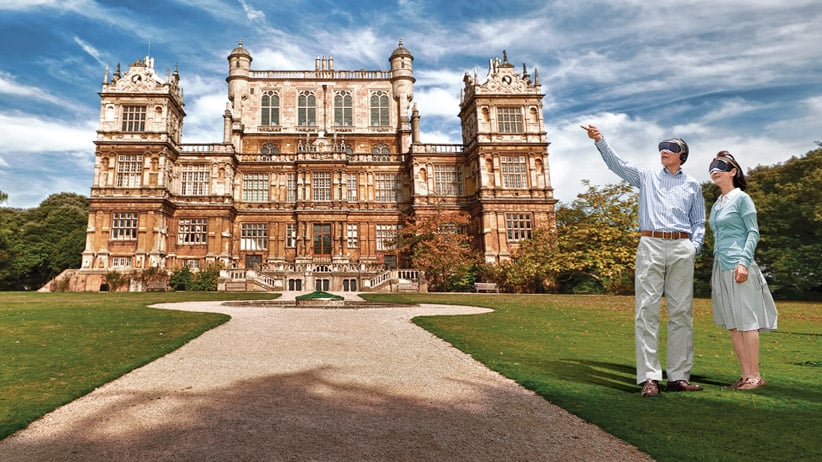 “The last time we did this, one woman walked in looking for a pair of tights, and walked out a couple of hours later with a luxury condo!” says Nicola Clark, the chipper, besuited marketing manager for Harrods Estates, the real estate arm of London’s most famous department store. She’s standing in the northwest corner of the retail monolith, inside a new pop-up shop devoted to high-end real estate. The space is expensively carpeted and lit with an enormous glittering chandelier. There are two comfy chairs for viewing homes through virtual-reality goggles, and a large turquoise velvet sofa for lounging.

It’s the third time in several years Harrods has attempted such a venture, and the first time for London real estate (the other two shops sold holiday apartments in the Bahamas and Dubai). Young, hyper-groomed sales associates stand around smiling at the river of shoppers. A group of women in hijabs wander by, Gucci and Louis Vuitton logos decorating otherwise modest headscarves. After them, a bus tour of noisy Chinese tourists. And then there are the native west Londoners, up from the countryside in their tweed coats and Wellie boots—another delegation in Harrods’s UN assembly of super-rich consumers.

The area occupied by the pop-up is normally devoted to the dress designer Valentino. But the fancy frocks have been turfed out for now, and the Manhattan Loft Corporation has taken over the space. It’s a temporary setup—a joint venture between the developer and Harrods Estates—designed to offer high-net-worth customers a little more with their shopping experience. Manhattan Lofts has even created Oculus Rift virtual-reality goggles, used by video game aficionados, for viewing the not-yet-built apartments. The experience gives prospective buyers the sensation of having walked around a condo before it’s built. (The project breaks ground next month and will be completed by 2018.)

In London, the idea of selling luxury apartments in a department store is not as crazy as it sounds. Harrods Estates has been doing just that for over a century, in fact—albeit discreetly. (They started in the store’s basement and now have their own stand-alone shopfront down the road.) If, after buying a $38,000 Cartier tennis bracelet and a $132,000 Fendi fur coat, you don’t feel sufficiently indulged, why not chuck a $4-million pied-à-terre in the cart, too?

According to Ray Smith, the twinkly Irish director of sales for Manhattan Lofts, most serious buyers who wander into the shop are already well-educated in the London property market. “We get a mixture of people,” he says, waving at the gleaming model high-rise with two-bedroom toy apartment, complete with designer dolls’ furniture. “Some are buying as owner occupiers and, for many others, it’s an overseas investment. We’ve had a lot of overseas buyers looking to purchase a property for their children to live in when they go to university in London.”

Manhattan Lofts has an impeccable reputation, having developed two highly successful London projects in recent years: the hotel and apartments at St. Pancras, and the Chiltern Firehouse hotel and restaurant—currently the hottest nightspot in London and so crammed with celebrities, a living wall of paparazzi has permanently erected itself outside the front doors. The new building, a 42-storey hotel-condo project with two cantilevered floors and three roof gardens, is located in the heart of regenerated east London. The 80-hectare Queen Elizabeth Park surrounds it. Apartments start at just over $1 million and run as high as $9 million for a penthouse.

According to Smith, the pop-up shop has been a success. Several sales are currently in the paperwork stage (he won’t be more specific). Part of the idea behind the collaboration, he admits, is publicity, plain and simple. “Yes, of course, we want to sell apartments,” he says, “but it’s also fantastically profile-raising just to be here.”

Asked if any of his buyers came in looking for a handbag and walked out with a piece of east London, he laughs. “People in London have been impulse-buying property for years,” he says. “We’re just making it easier for them.”