Alward: What New Brunswick can learn from Arkansas 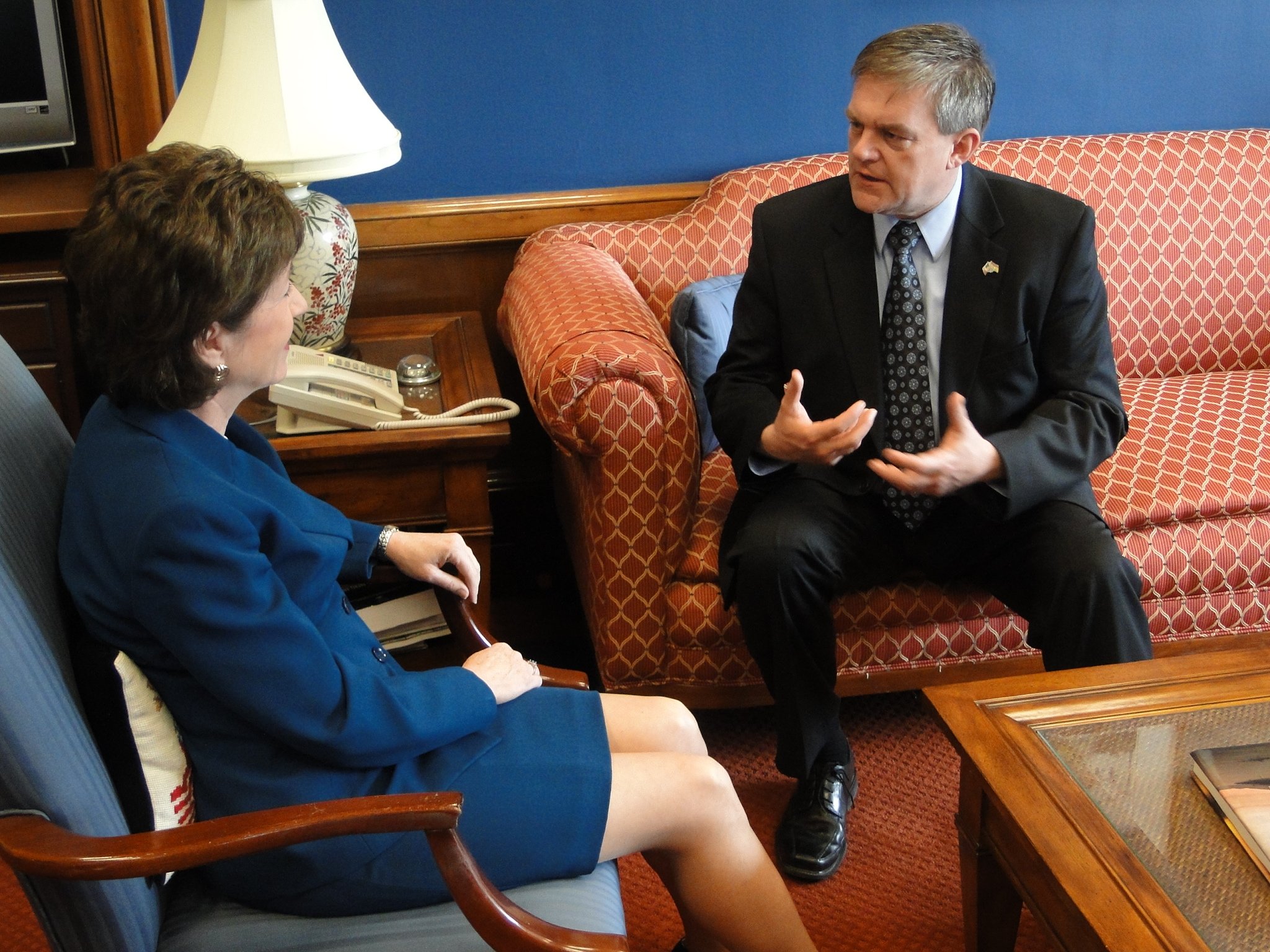 The premier of New Brunswick, David Alward, was in Washington, DC over the weekend and on Monday to meet with US governors, Maine senator Susan Collins (in photo above), and business leaders. I spoke with him today about those meetings.

Collins made the case for toughening Canadian regulations on the ingredients in metamphetamines — a message he said he would take back to Canada:

Q – While in Washington you also met with Maine Senator Susan Collins. What did you talk about?

A—She certainly raised concerns about regulatory changes for ingredients for making methamphetamines that would need to take place at federal level. I indicated I would take that message back to Canada.

I did speak with her on my belief that while we need to ensure border security, whether for illegal weapons coming in from the US or narcotics coming one way or another.  At the same time, we need to allow movement of goods and service and people. Both our countries are interdependent in many ways. It was a good meeting.

Alward also had extensive conversations with Mike Beebe, the governor of Arkansas about the development of oil shale:

Q – Over the weekend in Washington you met with the New England Governor’s Association, and had a meeting with the governor of Arkansas, Mike Beebe. What did you talk about?

A – New Brunswick has had recent exploration taking place and it looks very promising for development of shale gas. Because of that we have different companies working in New Brunswick. One of them is Southwest Energy which has a number of wells in Arkansas. Arkansas has been involved in shale gas for about a decade. We just had a delegation including three ministers and people within government departments and a conservation organization go to Arkansas to look at what is going well, what they have learned over the last decade, what can we learn to do things better, or to deal with issues as they come up.

This was an opportunity for me to sit down with the governor and get his view on shale gas development and what it has done for them, and see if there are ideas for the future if it comes to New Brunswick.

We also talked about their success in changing education results in Arkansas over the past five years and what the priorities were that they focused on.

Q—What was your main takeaway on the shale issue?
A—We are fortunate in New Brunswick that we are on the ground floor. I believe it will be very important to have a robust regulatory regime that provides clarity for developers and at the same time provide clarity and protection for communities and individuals on issues such as water. Quite frankly, the companies we have met with believe that having that clarity makes a lot of sense. That is the main takeaway I’ve had from it – that the opportunity for us is a game-changer – from an economic development point of view – and the importance of doing it in a responsible way.

Q—What was the main piece of advice from Governor Beebe?

A—The clarity in the regulatory regime was an important piece of advice.

A— Exploration is taking place right now. I think we will have a sense of the viability as we go. I believe it will be 3 years before any major development takes place.

Q – Do you have an estimate on the size of the resource in New Brunswick?

A—Not at this point in time. But we believe it could be very significant. But in terms of the projected volume, I am not in a position to say.

More of the conversation is here.