18 To Life Shocks the U.S. Critics 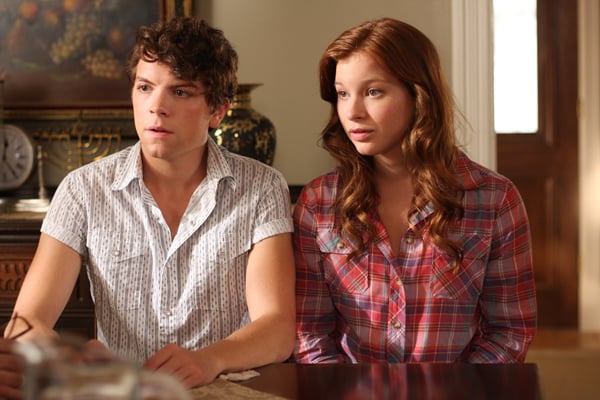 Like Myles McNutt, I expected the CBC dramedy 18 To Life to get mixed reviews when it got a U.S. run (on the CW network). Like him, I was extremely surprised at what a couple of the bad reviews have chosen to focus on: criticizing the show because it’s about two over-18 teenagers who get married.

McNutt’s post does a good job of responding to these reviews and the odd presumption — in the Wall Street Journal review — that a relatively realistic portrayal of teenage sex, of somewhat normal and (comparatively) de-glamourized teens who have been sexually active, is worse than the glossy version we get on the CW’s own shows.

I will add, though, that on thinking about it, I probably shouldn’t have been quite so surprised. Early marriage is a fairly controversial topic on television, possibly more controversial than early sex or early pregnancy. That’s because it manages to hit two types of controversy at once. First, even though it has the characters make the “moral” decision by getting married, they’re still having sex at a fairly young age, and as the WSJ review makes clear, that still pushes the buttons of those who feel that pop culture shouldn’t be glorifying youthful sex. (Telling people to wait till they’re married is often a sideways way of telling them to wait until they’re older; from that point of view, getting married at 18 is not going to help any.) And at the same time, others view it as a reactionary message, an attempt to convince viewers that getting married — even with no money and no job — is inherently preferable to just having an unmarried sexual relationship. This may be what the L.A. Times’ Mary MacNamara means when she says that “”it is much more shocking to see these young people leap into matrimony than it would be if they were just having sex or even moving in together.” That’s part of the point of the show: the characters make a decision that has more impact, legally and culturally, than any other, and one that their parents fear will ruin their lives.

Both sides, then, would view 18 To Life as an invitation to irresponsible behaviour, so it opens itself up to twice the complaints a teen show would normally get. Sometimes both these types of complaints come from the same people: the WSJ criticism attacks the show both for encouraging promiscuity and for encouraging premature monogamy (“many teens already have an inkling of how hard taking on grownup life before you’re done growing up can be”).

Now, the creators of 18 To Life didn’t have any of this in mind. They were trying to look at a young marriage and the impact it has on the couple and — perhaps more importantly — the parents. But now that the show is airing in the U.S., where the viewership is larger (even on the CW) and arguments over sex occupy a larger amount of journalistic real estate, this may become a larger part of the conversation than they intended. And I should also add that the subject matter of the show may well be a turn-off apart from any moralistic questions: the lead characters are, from any point of view, entering into marriage without considering everything that comes with it, and some potential viewers might not enjoy watching a show about people who aren’t acting very smart.

One thing I’d compare it to: if you were a TGIF viewer back in the ’90s you might recall that the show Boy Meets World did something similar, marrying off the hero and his girlfriend while they were college sophomores. (They actually spent the entire freshman year planning their wedding and calling it off again.) It led to several kinds of arguments: whether the couple was being irresponsible for getting married so young (the show itself seemed to suggest they were), and whether the culturally conservative creator of the show was pushing an agenda of trying to convince kids that an irresponsible marriage was better than pre-marital sex. (A scene where two other characters suggested that their co-habitation wasn’t a “real” relationship, while marriage was “real,” definitely seemed like prosletyzing.) It was controversial then on all sides, and it’s controversial now. It was also, in that particular case, a sign of a show that was on its last legs and whose lead characters had become idiots.