Curling will never be ruined 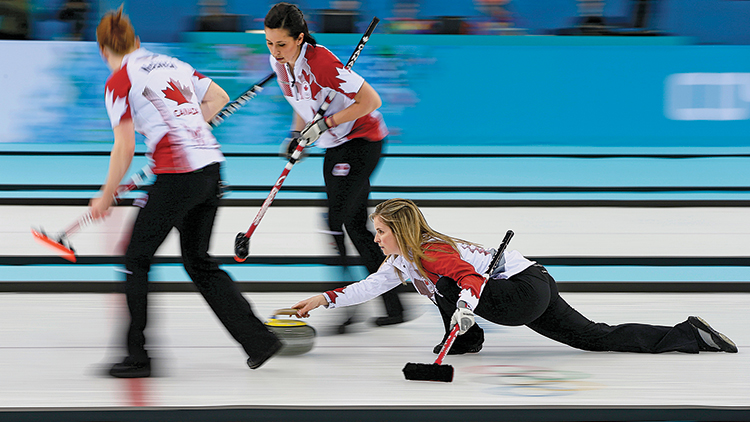 It was interesting to see curling experience a boomlet in the U.K. during the Olympic tournament, at which the country was represented by two-time world champion David Murdoch and a rink of picked all-stars. The sport seems to have caught fire on the BBC, as it does occasionally in the parts of Canada in which it is still somewhat foreign. Prince Andrew, duke of York, tweeted a whimsical photo of himself pretending to curl a teakettle down a “sheet” made of photocopier paper.

The Beeb, thanks to some grouchy quotes from Team Britain’s Swedish coach, was able to create a rabble-rousing narrative, casting Canada’s Soo-based Brad Jacobs’s side as a quartet of macho mercenaries with an “aggressive” demeanour unsuited to the friendly, drunken spirit of the game. Murdoch is capable of keeping up with anybody in curling, but the bad guys won. Trailing 9-3, the Scot conceded in the eighth end of the gold-medal game, allowing Brad Jacobs to follow Jennifer Jones’s Canadian women’s gold with a men’s.

It goes to show why Britain is so often disappointed in sports. Most games we play were invented there, and the British are forced to overcome misgivings when these games mutate into professionalized spectacles. The Old Country didn’t like the way lowbrow, hustling Australians and Americans changed tennis, and its failure to adapt turned Wimbledon’s “all-England club” into foreign turf for a century. International soccer tournaments have been one long torment for the English since 1966. And wicked Canadians have confiscated the charming Scots pastime of curling, turning it into an unseemly, crude combat.

The funny thing is that curling, even with money at stake, is formidably immune to most of the ugliness that modernity imposes on sport—the frantic marketing, the soul-killing training, the illicit performance-enhancers, the odiousness of billionaire ownership. Curling is unruinable. It will never be invaded by monsters with overdeveloped right arms. It will never suffer the equivalent of a dunk contest. It will never feature a bench-clearing brawl. Cities will never throw tax dollars at unsightly mega-curling clubs crammed with gift shops and restaurants?.?.?.?probably.

That is why metropolitan hipsters are now attracted to curling as a semi-ironic amusement, enjoyed in the incomplete, detached way one consumes quinoa. Curling stones have an attractive clank of rustic authenticity. But to actual rustics like me who grew up with curling, as an Andean peasant grows up with quinoa, it is disconcerting to see an element of one’s Canadianness turned into an affectation.

We have a triad of distinctively Canadian sports: Canadian football, hockey and curling. Football, from its origins to the present, has remained a collegiate game, a game of the ruling class. College kids invented gridiron football; McGill undergrads taught Americans what a “touchdown” was. Today, football is, notoriously, the shortest path to becoming a partner in a law firm, with golf a close second. Peter Lougheed and Rob Ford were football players, rich kids who, in different ways, leveraged the social connectivity of the game.

Hockey is the most popular sport in the triad because it is the game of the Canadian middle class, a game that requires a family to have something of a surplus and, ideally, to live near a town of some size. The typical sponsor for a minor hockey team has always been some kind of small business—a plumber, a restaurant, a trucking company. There are still plenty of kids in families too broke to afford hockey. In Canada, it is the first way one might learn that one is poor.

This is where curling fits in: It is a farmer’s game, a peasant tradition. There are still many villages in the West that cannot afford hockey rinks, but that faithfully lay down two curling sheets in a long, narrow shack every fall. In those towns, an agriculture society’s community investment in two sets of stones will serve all for decades. Where hockey requires every child to have skates and pads and sticks, the traditional equipment for curling amounts to two ordinary household brooms for every four players.

Nowadays, like everything else, it’s a bit more expensive. A modern-style curling brush might run you $50. A slider for one of your shoes, $30. If you can afford those things, and you have three friends who can, you are qualified to find a zone playdown and try peeling your way to the Brier. Even the glorious “pyramid” of English soccer is not this wide open, this firmly drilled into the soil of a country. Dukes might laugh, or smile indulgently, at curling, but you’ll pardon me if I can’t join in.