Agnès Varda: auteur as 80-year-old starlet on the beach

As the festival winds up, despite the glut of stars in town, it’s now clear that TIFF 08’s cinematic vintage was far from stellar. In fact the star-studded galas were especially weak. But a couple of trends stand out. It was a good year for French-language cinema (L’Heure d’été, Il y a longtemps que je t’aime, JCVD, La silence de Lorna, Un Conte de Noël and C’est pas moi, je le jure! come to mind). And it was a good year for that small minority of female directors, some of them tackling material that we don’t associate with female directors (Kathryn Bigelow making her Iraq combat movie, Hurt Locker; Canadian Kari Skogland making Fifty Dead Men Walking, a gritty thriller about an police informant in the IRA.) And one of TIFF’s real gems, Les Plages d’Agnès comes from a veteran filmmaker who is both French and female: Agnès Varda. 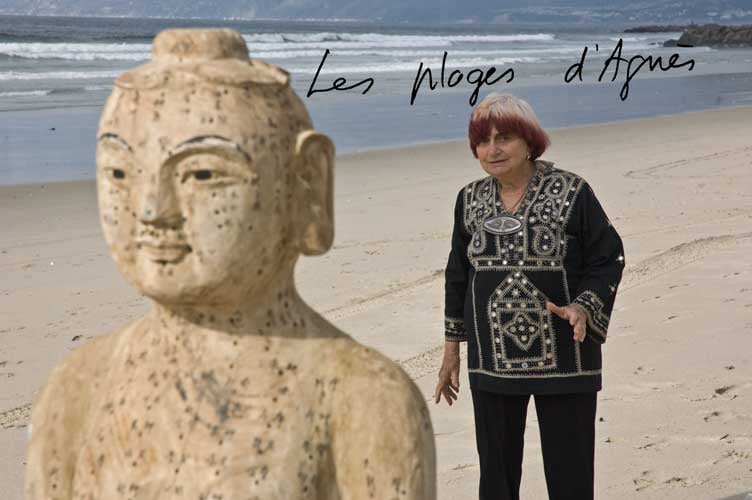 The legendary director, who’s now 80 years old, has made an autobiographical film that goes beyond documentary. She has created a carnival of art and artifact, reflection and re-enactment, that is funny, wistful, mischievous and wildly inventive. It’s a memoir as surreal mosaic, and without a soupcon of vanity it shows how Varda has played a historic role as a kind of Zelig of modern cinema for more than half a century.

Her story beings on the French Mediterranean beach of Sète, where she would vacation as a child, and which ntroduced her to notion of limitless horizons. We follow Varda through her infatuations with the surrealist poets and painters, her role in the birth of the New Wave in the ’50s, her time in Cuba right after the revolution, photographing Fidel, her escapades in Hollywood and Venice Beach in 1968, filming the Black Panthers, hanging out with Jim Morrison, bringing him to Paris, marching hugely pregnant at an pro-choice march (something my own wife did back in the day). She talks with sad fondness about the love of her life, director Jacques Demy (Les Parapluies de Cherbourg), and about filming him in his final days as he was dying of AIDS in 1989, at a time when the disease was so taboo no one dared talk about it.

The film’s contemporary sequences are shot with handheld video, which looks a rather cheap and garish compared to the clips from her own films—and especially her black-and-white still photography, which is gorgeous. Varda is a superb photographer. And what becomes casually apparent over the course of the film is that she was a multi-media artist before the term entered the lexicon. Throughout her career she has played with photographs, film, and art installations. And for Les Plages d’Agnès, she has contrived some hilarious sets, including a mock-up of her film production office on a beach, with computers and desks pitched in the sand. Bunuel and Fellini are gone, but Varda seems to be carrying on their visio.

Although she embraces nostalgia with a passion, her iconoclastic wit prevents this self-portrait from get maudlin. Home-movie kitsch and sad regret for those who are gone somehow merge into a single galvanizing sentiment. Although this is autobiography, most of the film is not really about Varda, but about about the amazing parade of characters who rolled through her life. Comically, she walks backwards as she talks to camera, mocking the whole notion of playing tour-guide of her own past. But she cuts quite figure. With her bowl-like haircut, dyed two-tone maroon and blonde, she looks like some Mayan gamine trickster. And as she constructs cartoon-like installations for her film—eventually creating floor-to-ceiling window blinds with shimmering strips of celluloid salvaged from an unreleased movie—she happily admits that “the old filmmaker has turned into a young artist.”