BREAKING BAD: The Good And Bad 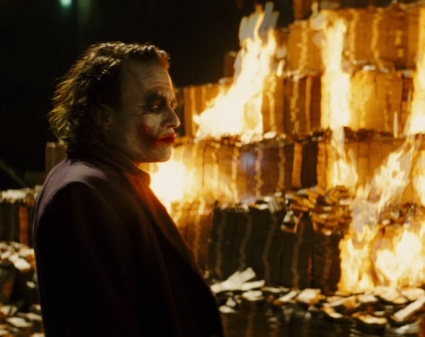 Sunday night’s season premiere of Breaking Bad sort of clarified what I like best and least about the show. It has certainly improved a ton since the first season, when it seemed to me like the ultimate generic cable show, with every cable-network-approved cliché — the dysfunctional rot at the heart of middle America, Jekyll-and-Hyde duality, labyrinthine soap-opera plotting — in place. Starting in season 2 it became a much better and more interesting show, always bolstered by Bryan Cranston’s performance (though I’m not convinced that the rest of the cast is terribly interesting). Still, my main likes and dislikes remain pretty constant:

Like: The painful, awkward, funny-scary moments when Walt, a monster who still likes to think of himself as a basically decent man doing his best for his family, tries to justify himself to “normal” people. His use of meaningless buzzwords to explain his motivations, like “it’s complicated,” is a wonderful character touch; it also helps pull the show away from cable cliché by parodying the notion of moral ambiguity or “shades of grey” or all the other buzzwords that cable showrunners use to describe their work. Walt wants to think of himself as a symbol of life’s complexity and the difficult choices we have to make, and Vince Gilligan has talked about “taking a good man and transforming him into something else,” but it could be that he’s just a rotten person who enjoys this life and has found his true calling. And when his deranged self-justification butts up against a roomful of regular people, as it did in the gymnasium speech in the third season premiere, the result is a scene that is both very funny and very frightening, which is something few shows have been able to manage since the better episodes of The Sopranos.

Dislike: The big “symbolism” scenes. Any wordless scene with Walt interacting with some symbolic thing — oh, look at the meaningful way he’s cutting that bread! — is cable formula stuff, leading to blatant overplaying by both Cranston and the director (well, Cranston directed this episode, so all the overplaying is his). The burning-money scene was the show, and the edgy cable genre, at its weakest: symbolism on a Rosebud-was-his-sled level, tricked out with silly camera angles (putting the camera inside the grill) and requiring the main character to act nothing like a recognizable human being. It’s like they look at those old parodies of bad art movies — the ones that begin and end with a leaf falling, symbolizing the transience of life — and take them seriously.

In sum: Good show; could do with fewer symbols.